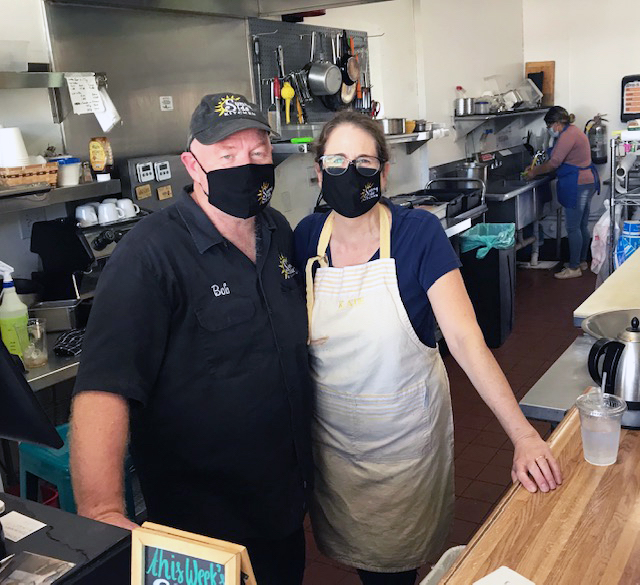 Bob and Kate Carpenter in the “cozy” working space of their Sunny Side Kitchen.

Last week on June 18, California Governor Gavin Newsom announced the mandatory requirement for all Californians to wear a mask, when out in public or in high-risk settings.

A good idea, and Escondido’s local restaurants have been way ahead of him, implementing a whole variety of additional measures for protecting against the virus.

Several that we recently visited or talked to via phone said they required wearing masks early on, along with social distancing, the basics for protecting customers and employees, while also tapping additional expert guidance for added safety.

Bob & Kate Carpenter, owners of Sunny Side Kitchen (155 S. Orange St.), from the beginning wanted their customers coming in to wear masks and so they placed a supply of them at the front counter, encouraging their use by anyone who came in not wearing one.

“Oh, thank you, I just forgot,” was often the response by non-wearers, Bob says, and they would promptly put on one they had with them or one being provided. Bob and Kate wear masks all the time as they work behind the counter, preparing their “California cuisine” specialties.

Sunny Side is a smaller “mom and pop” restaurant, and Bob says he really likes that term because it very much fits the friendly, family-style atmosphere that he and Kate have developed with customers. And he says that their compact space – which he terms “cozy” — has actually been a positive for them in the pandemic because fitting their already active take-out and delivery options.

They never had to close when the virus first hit, and take-out has ballooned to about 70% of overall business, Bob says.

Being a single, independent operation rather than a franchise or part of a chain, they consulted and adopted guidelines for protecting against infection provided by the National Restaurant Association (Washington, DC) and the local department of health. They initially shut down their small dine-in space service for about three weeks, but opened it back up in late May.

The restaurants 300 sq. ft. dine-in space can accommodate four tables but now has just two to enable the necessary distancing. Hand sanitizers are always placed at the tables and at the pin-pad pay station.

“A lot of people still are not comfortable with inside seating,” Bob says. “We’ve seen some [customers] order their take-out and then prefer to go back outside” to sit at some widely spaced tables or even “go out and sit in their car” to enjoy what they have ordered. 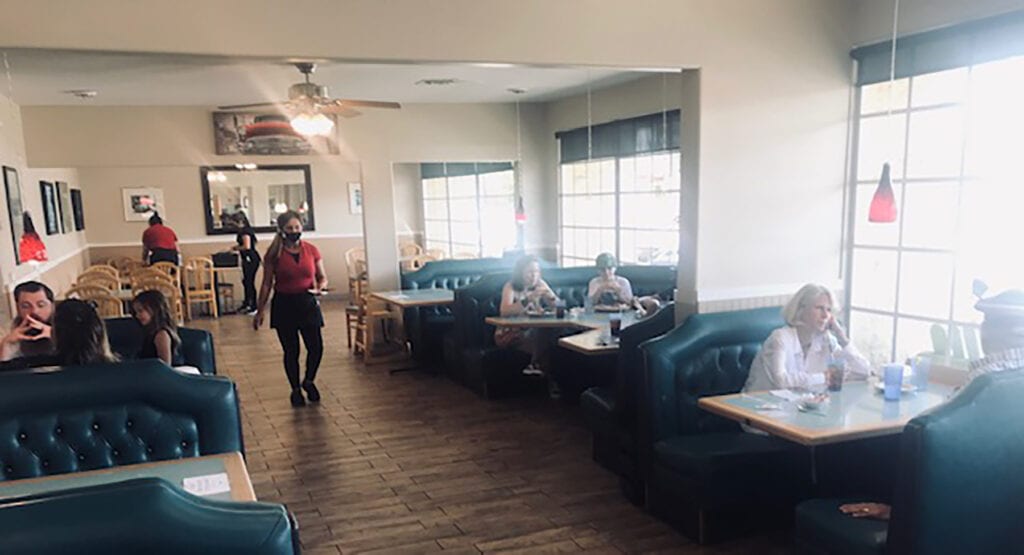 Nima says that with the social distancing between its booths, and half-a-dozen widely-spaced tables outside, the restaurant is now doing about 65% to 70% of pre-virus business. Next, Plexiglass panels will be installed between the booths so that dine-in can return to near 100%.

A “designated staff member,” Nima says, uses a water and bleach mixture to sanitize all surfaces every 30 minutes, even to wiping down the backs of the booths. He tries to set the example of total cleanliness for employees by pitching in to clean, say, bathrooms and other out-of-the-way surfaces.

He notes that one of the restaurant’s small but thoughtful safety strategies has been to move all condiments to a separate “condiments table” to make sure that all eating surfaces are more easily and more completely sanitized.

Employees have their temperatures taken each morning when they come to work, and they are told not to come in to work if feeling ill in any way.

The local Farmer Boys restaurant (925 W Mission Ave.) never closed down when the virus first hit. While dine-in service was shut down and remains closed, drive-thru service has continued to be popular for its customers.

With the relaxation of sheltering-at home, business has rebounded, according to Team Leader Andreas Andreou, with implementation of a two-tiered strategy for serving customers.

The majority order at the drive-thru window but they can also walk inside to order and collect their food, either for take-home or consumption at a couple of outside tables. With continued steady business, no employees had to be laid off, Andreas says.

He says he can’t predict when the restaurant will again provide dine-in service. That will a decision to be made by the company’s corporate office in Riverside, California.

Andreou emphasizes that both employees and customers early on were encouraged to wear masks inside, and if customers did come in without wearing one, “they should have gone elsewhere,” he says. Total sanitation inside the store is conducted every two hours.

Like many fast food restaurants locally and around the country the Escondido Chick-fil-A (1290 Auto Park Way) currently provides no dine-in service. The company’s national headquarters in Atlanta in mid-March mandated closure of dining rooms at all its restaurants nation-wide.

Instead, Chick-fil-A is emphasizing what it calls “Safe Service” options:  store pick-up, delivery via its Chick-fil-A app, and — with enthusiasm — its “signature” drive-through service.

To help speed that service, team members are positioned outside along the lines of cars to take and send along orders in a socially distanced way.

Besides wearing masks, the team members taking orders wear gloves and are encouraged to use Purell hand wipes. Additionally, the restaurant is following a corporate guideline which calls for installation of a handwashing station outside the building, for team members to use “every 30 minutes.”

Another corporate directive says that even if wearing gloves, team members should also wash their hands if they have to handle cash. And guests paying with credit or debit card are asked to swipe the card themselves; the option to enter the required PIN or sign a receipt not provided.

Currently recommended is cleaning of all surfaces – from card readers to doorknobs – every 30 minutes.

Independently owned, the local Chick-fil-A is free to make its own decision for any “phase one” opening of its dining room. When it does, it can draw on a range of recommended safety measures outlined by the corporate office.

Escondido’s In-N-Out Burger (1260 W. Valley Pkwy) opened up for dine-in seating and service in early June. But on a recent Wednesday afternoon, there were two to three times more customers dining at the outside tables than inside.

In an e-mail response to our questions, Denny Warnick, VP of operations, wrote , “In general, the precautions we’ve taken, like replenishing all of our associates’ sick leave banks to a two-week minimum, and pre-work screening questions and temperature checks for our associates, are company-wide initiatives.

“We’ve relied on public health agencies, our own internal experts, and experts outside our company to monitor developments and to guide our implementation of additional protocols to protect those in our restaurants and prevent the transmission of COVID-19,” he said.

The company’s website states that with the exception of seven counties –Alameda, Contra Costa, Imperial, Marin, Santa Clara, San Francisco, and San Mateo – restaurants at all other California In-N-Out restaurants offer dine-in service; “patio seating is available except in Alameda and Imperial Counties.”

All of the restaurant managers interviewed were well aware of how important a variety of measures for cleanliness are if they expect to maintain and build customers confidence and encourage their return.