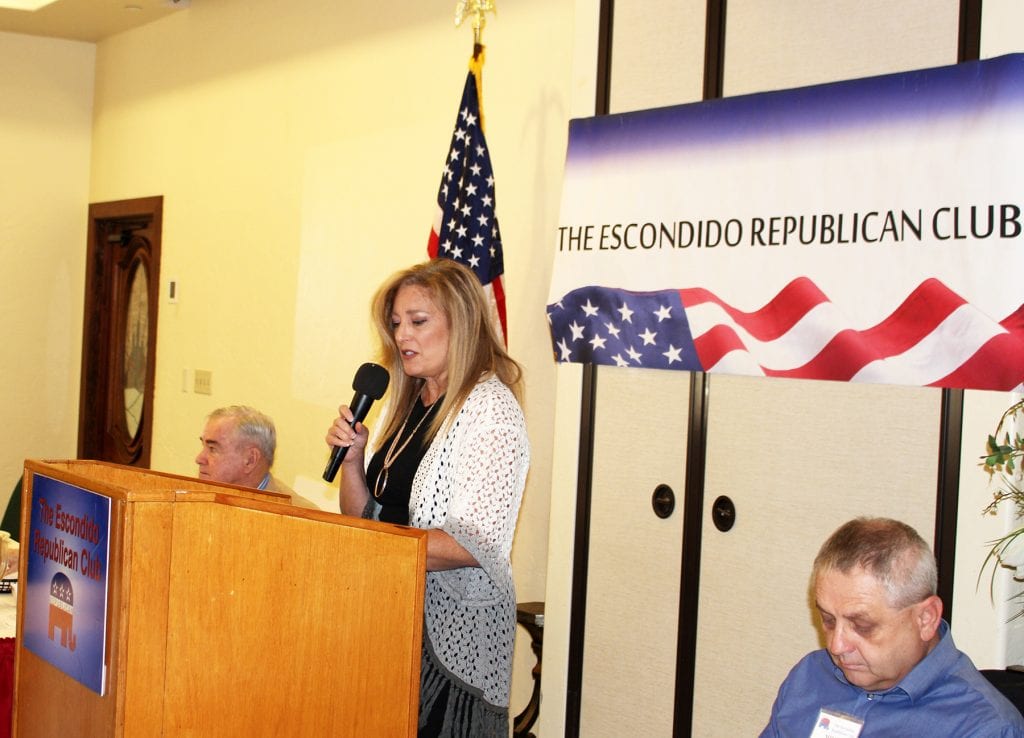 Marie Waldron of the 75th Assembly District, at Monday’s The Escondido Republican Club (TERC) updating members about life in Sacramento.

The Escondido Republican Club (TERC) Monday held their last meeting before the election— their monthly luncheon at Cocina del Charro —and hosted Assemblywoman Mary Waldron, of the 75th District. She talked about what it’s like to be the second ranking Republican in the Assembly.

Waldron is an old friend of the club, having been a member since her days on the Escondido city council, a job she held for 16 years before being sent to Sacramento.

Mrs. Waldron, who is originally from New York state, talked about how in her early days she worked at a television station and did advertising for the news department. She worked for both Times-Mirror and Cox. She worked for the city of Escondido eight years before venturing into local politics. “I got to learn a lot,” she said. “I attended all of the city council meetings for eight years.”

Then she met her future husband Steve Waldron and they started a business together—that’s when they began to realize the effects regulation has on small business and how much it costs. That was when she decided to run for the Escondido council. She lost the first time, and then tried again and won. She stayed on the council for 16 years.

Waldron is Floor Leader of the GOP in the Assembly and is second in rank. “My job is pretty busy,” she said. “I’m up late most nights.” She deals with big mounds of paper because the legislature is still technologically in the last century. Bills are printed in paper but not saved online. lawmakers can read the laws as they move along, but the public can’t.

“It’s staggering,” she said. “Nothing is online. It would help us to sharpen our analysis on the issues if we could put them online.”

Although there is much partisanship in Sacramento the parties do work together sometimes on issues that benefit all. During the August – September session they vote on literally thousands of bills. “They are marked up entirely on paper and the amended bills move back and forth physically.”

In the Senate when they “cut and paste” amendments, they literally cut paper and paste it over old sections. Each day large stacks of marked up bills move through the corridors.

“The Republicans have iPads. The Democrats have papers,” she quipped.

Waldron serves on five committees, including the all-important Governmental Organization Committee, which oversees tribes, tobacco and horse-racing. “This is important for me because my district has eight tribes,” she said. She also serves on the Local Government Committee, and the Health, Rules, Ethics and Arts & Entertainment committees.

Committees meet all week long. They meet as a group on Monday’s and Thursday, which allow them to fly home on Thursdays.

Sometimes Republicans support bills and sometimes they withdraw their support when an amendment changes the bill. Once Waldron was able to stop a bill from going forward just by voting no and causing it to be pulled from the consent list. Later it was withdrawn entirely.

Assembly members can and do change their votes during and even after the vote. This makes sense, she said, because they deal with so many bills that often a vote is cast by mistake and only discovered later.  “People have realized they voted yes on the wrong bill,” she said.

A bill is never completely dead. “I call them Lazarus bills,” she said. “You think it’s dead but it keeps coming back.”

Since she was talking to a roomful of Republicans, the discussion turned to the upcoming election, which will happen before TERC’s next meeting, which will be a “post victory meeting.”

“We have twenty-five seats in the Assembly and lot of seats are up for grabs,” she said. In this session, the Democrats control 55 seats, one more than the supermajority needed. “Our candidates are being targeted by labor and special interests who are pouring a ton of money into the election,” she said. “We’ve got a fight on our hands. We could end up with twenty three or twenty-two Republican members.”

She refers to her caucus as the “mighty twenty-five” and said that unified they have to temporarily allied with some moderate members to stop some bills from passing that would have been harmful to business. “We stopped a tax on water,” she said. “We blocked a lot of jobs killing bills, one of which would have banned the sale of any car that used gasoline!” She successfully fought a bill that would have given the state incentives to buy out of state power.

“I’m proud of the fact that even twenty-five can make a difference,” she said.

We talked to Ed Gallo, who is running for reelection to the council. He read a recent article that talked about how 153 people in San Diego County were signed up to vote but weren’t legally entitled to vote.

“Don’t tell me that every vote doesn’t count!” he said. “It was a sixty nine vote margin for me one year and forty-three in another.”