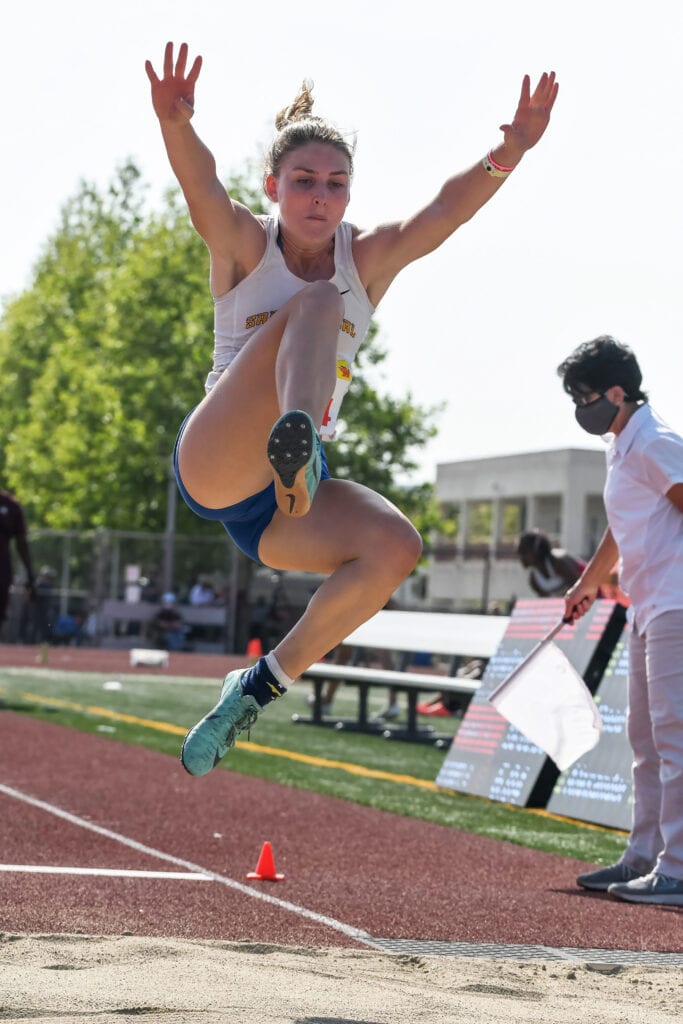 An all-around star, San Pasqual’s Elise Miller shows the form that has allowed her to dominate in both the triple and long jumps. Photo courtesy of Andrew Clark

There have been both individual and team achievements taking place on the Escondido prep sports scene that simply must be acknowledged because of their substantial significance.

It seems as if almost everywhere you look, there’s a marvelous story to be told. Let’s take a look at some of these noteworthy athletic efforts.

Pulsating Pats – The Orange Glen basketball team is a lock to become the fourth team under the splendid direction of coach Chris Featherly to reach the coveted 20-win plateau. A selfless, hungry and grinding squad that knows how to play together, the Patriots (19-3) have already authored winning skeins of eight and five as well as a pair of three-game streaks.

Currently positioned at No. 9 in the latest San Diego Section Basketball Rankings, the Pats have been led by the strong senior trio of stellar guard Mickey Chew, glue-man Adam Nieves and tough two-way performer Chris Martinez.

With just two regular-season games remaining, OG figures to enter the upcoming Division II playoffs on a roll and primed to make a deep run in the postseason. An already special season could well turn into something even more spectacular.

Look for a feature story on this compelling team in an upcoming issue of The Times-Advocate.

Cookin’ Crusaders – An eight-game winning streak to start the season set the tone for what has been a most satisfying season thus far for Calvin Christian (12-2). The Crusaders have been equally adept (6-1) at both home and on the road while outscoring the opposition by a hefty 183 points.

Rated at No. 20 in the SD Section, Calvin would have a perfect slate if not for the Maranatha Christian Eagles (14-5) who have handed the Crusaders their only two setbacks.

The ringleader for CC has clearly been 6-11 sophomore Martin Gumwel, who has been a mighty force both in the scoring column (17.2 ppg) and on the glass (13.4 rpg). Not only has Gumwel racked up 11 double-doubles but he’s also been a defensive presence while averaging nearly three blocks per game. And just imagine, this youngster is still just scratching the surface of his intriguing potential.

But Gumwel has gotten plenty of able assistance from impactful seniors Brandon Nelson and James Jansma. The 6-7 Nelson has been a notable offensive contributor, tallying 20 or more points on five occasions while averaging 16.7 per contest. Meanwhile, Jansma has put his 6-4, 211-pound frame to great effect while posting solid numbers (9.4 ppg, 6.1 rpg) that are indicative of his vital importance.

Based on what has already transpired, it would be a huge surprise if the Crusaders don’t make a strong push once the Division IV playoffs commence.

Glorious Golden Eagle – What a memorable week it was for San Pasqual High track and field standout Elise Miller. Once again this remarkable senior proved she is a Golden Eagle who can not only fly but run, leap and jump with seemingly equal ease.

Last Saturday in a tri-meet versus Ramona and host Mission Hills, Miller was omnipresent and dominant, capturing not only the 100m hurdles but all the jumps. In the high she soared to a personal record of 5-04.00 while in the triple, her distance of 39-06.05 bettered by nine feet her nearest rival. All told, that was a most impressive quad she pulled off.

But what Miller fashioned seven days before at the Arcadia Invitational was even more significant, something of a truly monumental nature.

In the past, the versatile Miller had thrice gone beyond the 40-foot mark in the triple but wasn’t quite able to crack that magical 41-foot barrier. But highly motivated by facing top-flight competition and down to her last chance of the day, the SP star hopped, skipped and jumped her way to history. By the time she landed in the pit and the requisite measurement was made, Miller had produced a scintillating effort of 41-01.00 which equaled the second-best performance in SD Section annals, trailing only the 41-08.25 established by Mount Miguel’s Jackie Anderson way back in 1987. Needless to say, Miller was a hands down winner.

And just to add a little more sizzle to her trip to Arcadia, Miller logged another Invitational triumph with her leap of 19.01.00 in the long jump that helped put the bow on one terrific afternoon.

As of now, Miller has yet to taste defeat this season in the any of her aforementioned disciplines which encompasses some 26 events. Streaks rarely come much lengthier. And with upcoming opportunities to shine in the Valley League and CIF Finals, who knows what heights this supremely gifted trackster could conceivably reach.

After all, when a Golden Eagle can not only take flight but niftily maneuver on the ground as well, that’s a rare combination that’s damn near impossible to beat.

Masterful Mateo – In his prep farewell at the SD Swim Championships (Division II) held at Granite Hills High on Friday April 23, Classical Academy’s Mateo Parker left quite the reminder of his preeminence and singular talents.

While successfully defending his two meet titles from a couple of years before, Parker was definitely a showstopper as he prevailed in both the 50 and 100-yard free with blazing times. In fact, his clocking of 20.15 in the former established a San Diego Section record that bettered the previous mark held by two other swimmers.

Shortly after that tremendous effort, Parker delivered another boffo performance when he stroked to victory in the 100. On this occasion he was timed in 44.65, a mere 17 hundredths off the section standard set in 2012 by Rancho Bernardo’s Trent Williams.

Moreover, Parker’s presence loomed large elsewhere as he spearheaded runner-up finishes for Classical in the 200 medley and 400 free relay with stirring anchor legs. Now that’s what’s known as a good day in the water!

Armed with a sublime blend of physicality and speed, Parker is expected to continue making waves at his next port of call, the University of Southern California.

Nonetheless, the considerable wake that he leaves as a legendary Caiman will forever ripple throughout the history of the Classical swim program.