Roynon Museum packs a big punch in a small footprint 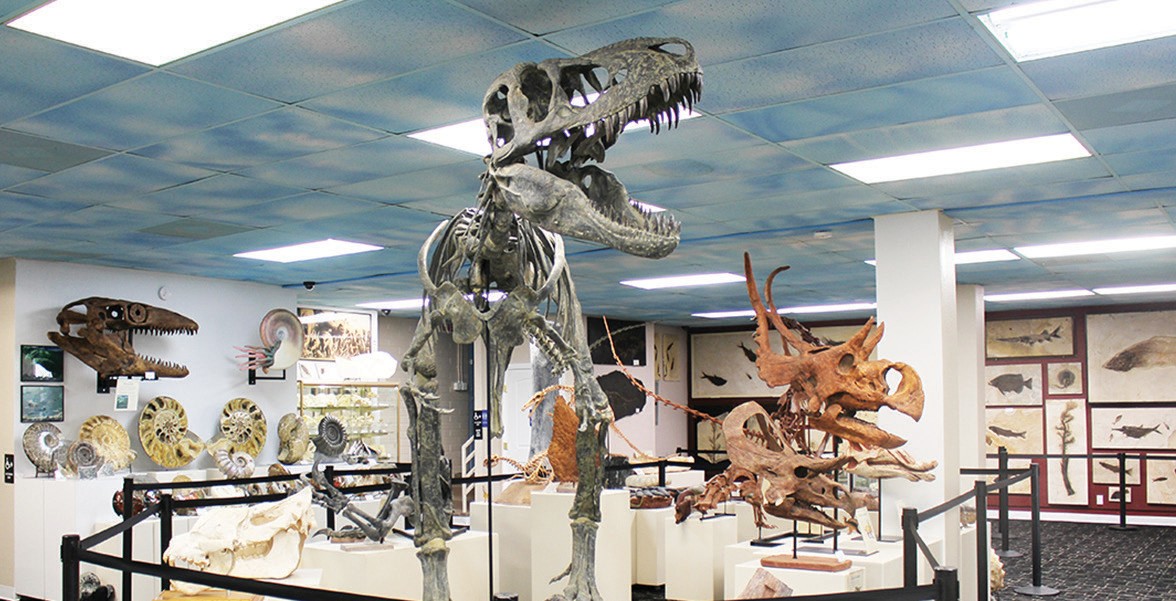 You can find the thrills, fun and education of Jurassic Park right in your backyard. Without the chance of getting eaten!

The Roynon Museum of Earth Science and Paleontology in Escon­dido could be the most impressive dinosaur and geology museum that you will ever see, unless you make it to the Smithsonian in Washington D.C.

Of course, it’s a kids’ paradise. It’s 50-50 as to what fascinates them the most. Some can’t wait to see the dinosaurs but others want to see the rocks!

What’s particularly impressive is that the museum grew out of the personal collection of Escondido’s Keith Roynon and his wife, Judy— it’s a completely private collection that doesn’t get public money to maintain it.

So don’t grouch about the fact that they charge you $12 at the door. You’ll thank me later and admit that it was money well spent, if you think that expanding the mind is worth a little bit of green!

The museum was originally based in Roynon’s home, but it outgrew that and moved in September of last year to its current location in down­town Escondido. Then it dodged a bullet on December 17 when torrential rains caused a leak in the roof that could have ruined the collec­tion— without the quick work of the staff who moved everything out of the way of the water.

“We were very fortunate. Our damages were just to the walls and carpets,” says Jeannie Nutter, direc­tor of the museum.

The museum was able to reopen on January 19 and the staff wants the world (although let’s start with Escondido first) to know about it!

Keith Roynon has been collecting rocks, minerals and fossils since he was 6-years-old. His first find was a shark’s tooth in Scott’s Valley, near Santa Cruz. He grew up on a farm there, and so was always interested in animals, both alive and long dead.

And if he doesn’t still have 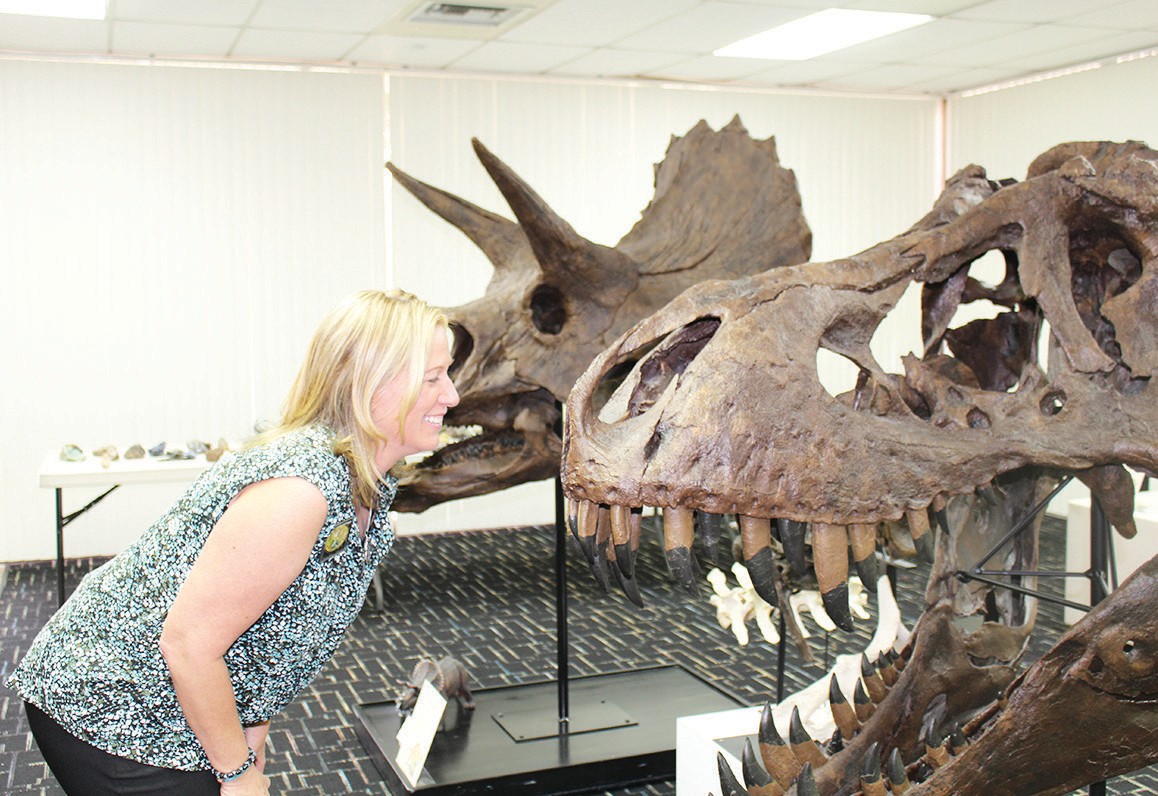 Sherry Bauer, director of education and special events, gets a little face time with a T-Rex.

that first shark’s tooth, he’s made up for it with probably thousands of other teeth, fossils and rocks that he has collected through a long life. He began in earnest in college when he did a lot of digging in the Mojave Desert and in the Ammonite depos­its of Baja California.

Ammonites are mollusks that thrived in the oceans during the age of the dinosaurs. Roynon also dug up these fascinating sea creatures in west Montana, near Round up. Dur­ing this period he met the legend­ary paleontologists Bob Bakker and Jack Horner, who some consider to have been the real life models for the character Dr. Alan Grant played by Sam Neill in the hit film Jurassic Park.

After earning his Bachelor of Sci­ence degree at Seattle Pacific Uni­versity, and continuing his educa­tion in geology at the University of Washington, he and his wife, Judy, relocated to Escondido, where he continued to add to his collection.

Paleontology remained his very active hobby until 1997, when Roynon retired from the antique business. He had also worked in various scientific fields, such as the lab technician for a biological sup­ply house.

After retirement Roynon set up the 501(c)3 nonprofit for the mu­seum, which has operated in Escon­dido since 2000.

Some of the very dramatic fossil skeletons you will see at the muse­um, while life-sized and completely authentic, are reproductions.

“There are just not enough fos­sils to go around. You have to rely on some reproductions,” observes Roynon. This includes a reproduc­tion of a two fighting dinosaurs: a small conchoraptor attacking a pro­toceritops.

Besides fossils of dinosaur skele­tons, Roynon also has a very exten­sive collection of fossilized dino­saur eggs, as well as seashells and a large collection of ammonites. One of the most amazing exhibits is the “fossil fish wall” of specimens from Wyoming. 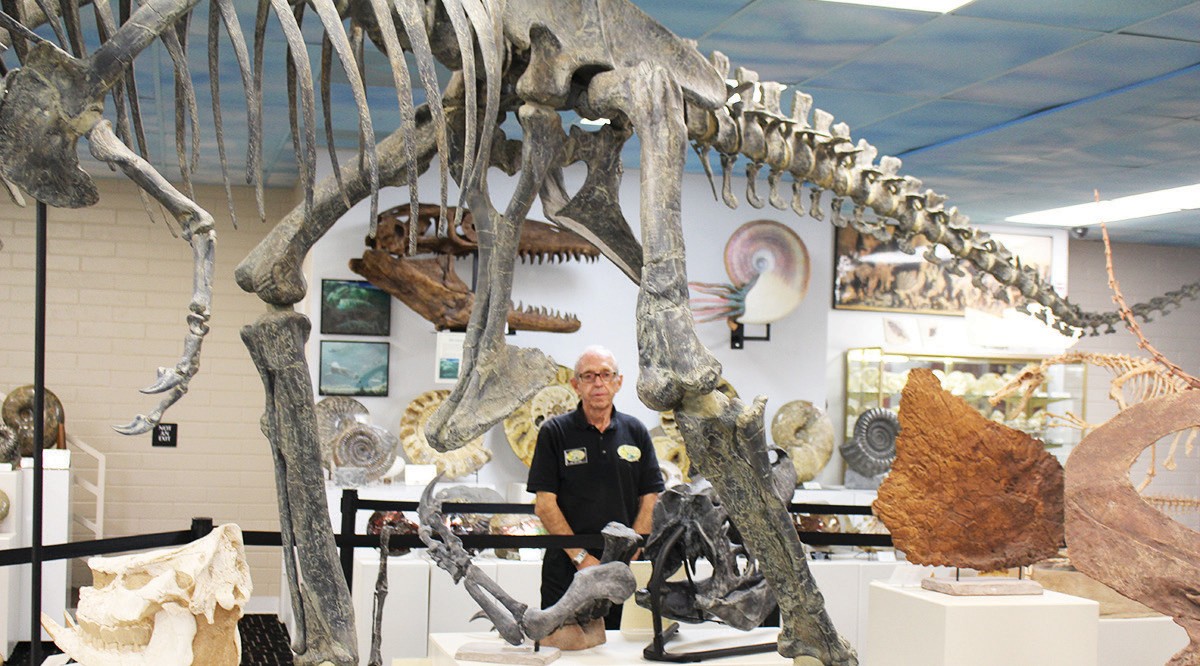 Keith Roynon framed by the fossilized remains of one of the giants of dinosaur age.

re­production of one of the most iconic dinosaur skeletons, which is, not surprisingly, still in Mongolia, says Roynon.

There is also a very extensive rock and mineral collection, some of them quite startling and feasts for the eye.

We stress that we are educational,” Roynon says, noting that many of the earth science classes offered a “very hands on,” He adds, “There is no oth­er museum that does what we do. We teach earth science (which is a core subject for students in grades 2-3) so we are booked by a lot of school districts.” They also host Scout groups and home schools.

A docent can show the sequence of life from the Precambrian to the Pleistocene using actual fossils to illustrate. Also the physical events in the earth’s history, such as changing climates, volcanism, plate tectonics, and mass extinctions are brought to focus by showing how they affected live over the eons.

Despite what it does, the museum is privately funded, and doesn’t yet have any grants. “People wonder why we charge. But we are private. What we have here you won’t find anywhere else unless you go to Denver or Chi­cago. I don’t believe that any museum on the west coast repeats exactly what we do here. Do you get into Disneyland for free or the Safari park?”

Once people get inside the museum and see its wonders, they frequently leave amazed. A school principal re­cently called the museum “The jewel of Escondido and the jewel of San Diego County.”

“We have worked hard to get to this position,” says Roynon. “We put our­selves deeply in debt. Now we need to let the world know that we are here so we can fill it.” 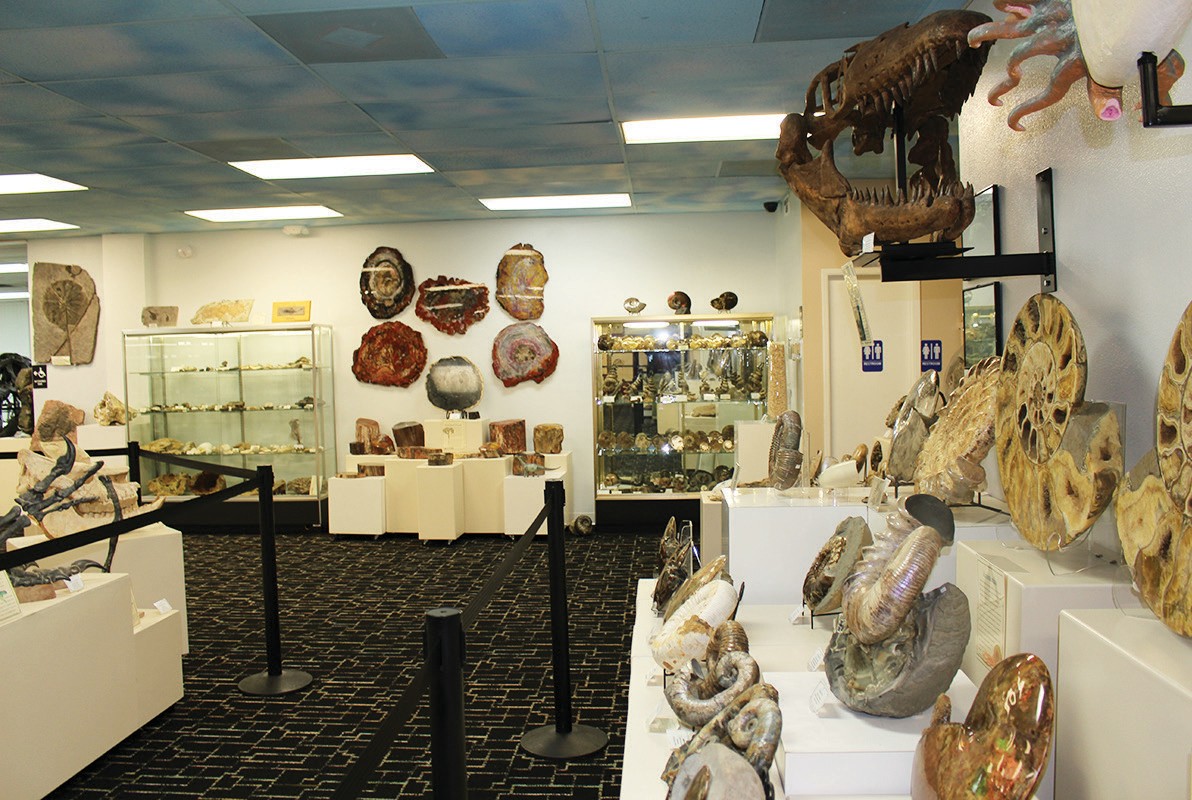 Everywhere you look, the museum is filled with wonders.

She also brings in groups, such as Rotary clubs, to hold meetings in the museum. If you have a group that wants to meet at the museum, give her a call at 442-999-4449 or email her at education@roynon. The museum is also available for birthday parties, with packages that fit most budgets.

Keith Roynon is a natural raconteur who keeps children entranced with his 70-plus years of stories.

Clarke Dailey, director of public rela­tions and fundraising for the museum, says, “I think what sets us aside is the knowledge base that comes with the extensive collection and exhibits. The knowledge that Mr. Roynon brings and the intimate know how of the science behind it. I’ve been to many museums but I’ve never seen a curator who is so open and sharing. The rapport he has with the kids and his ability to grab their attention and keep it for hours, is phenomenal.”

Nutter adds, “I’ve been to the Smith­sonian twice and I enjoyed this more. You have so much variety of such ex­emplary quality in such an intimate set­ting. When people come here they ex­claim, ‘I can’t believe there is something like this in Escondido.”

And it packs all that into a space that is less than 5,000 square feet. That in­timacy and the fact that kids and adults “can get up close and personal and that there are some things that you can touch is very appealing,” says Dailey. “I like that word intimate to describe it.”

Roynon remembers back to all of the years that he built his collection. “When I was collecting all this I wasn’t working toward this. I never dreamed we would have this.”