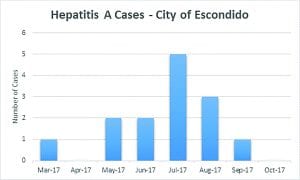 This chart prepared by the City of Escondido shows the incidents of Hepatitis A beginning in March.

Although Monday the County Board of Supervisors extended the public health emergency for the ongoing hepatitis A outbreak by another two weeks, the man in charge of fighting that outbreak in Escondido said this week that “our numbers are going in the right direction.”

According to the County there have been 544 cases of hepatitis A associated with the outbreak in San Diego County as of November 6, with 372 people requiring hospitalization and 20 deaths.

The city has vaccinated more than 100 homeless residents and about the same number of city employees who might be at risk of exposure to hepatitis because of their jobs, e.g. police officers.

The Times-Advocate spoke to Deputy City Manager William Wolfe about the situation locally.  Several weeks ago, Wolfe was put in charge of the city’s resources that are devoted to fighting the epidemic.

Wolfe said he’s still having trouble getting all of the statistics he needs about the local outbreak from the County Health Department.  “I’ve been asking for the numbers in Escondido by the month and by individuals,” he said. Although the public health emergency became official September 1, around the time Wolfe was hired by the city, he has yet to get data on individuals.

The frustrating part of dealing with the County, said Wolfe is that they will say “less than five” for a category such as “the homeless. “When you are dealing with a total of 13 or 14 cases, that’s not very helpful,” he said.

The city has been moving aggressively with a “vaccinate, sanitize and educate,” program, with COPPS police officers who are familiar with the homeless population of Escondido working in tandem with county health nurses.

This year the city had one hepatitis case in March, zero in April, two each in May and June and spoked to five in July, with three in August (see the chart.)

Wolfe started in August 28 and met with county health officials on September 14, when they came to the city to say, essentially, “we have a problem.”

Since that meeting the city instituted a plan to combat the disease, which is spread by infected feces, and so is most effectively combated with hygiene and vaccination.  They used the County’s protocol of vaccinate, sanitize and educate.

“Some of our COPPS officers who have become our homeless outreach people teamed up with county nurses and vaccinated about one hundred or more homeless.”  Some refused to be vaccinated and some said they had already been vaccinated, said Wolfe.

City workers also sanitized all of the city’s public restrooms, where some of the soap dispensers had been pulled off the walls. The public restrooms that were sanitized included the rec center and library.  “We’ve made sure there’s soap and the ability to stay clean at those facilities,” said Wolfe.

The County also provided sanitizing kits that include hand sanitizers, soap, wipes and plastic bags. The city handed out 225 of those kits to the homeless population. “Most of education has been word of mouth by police, but we also put information on the city website, so any citizen can know what to do personally,” said Wolfe.

Hepatitis A is spread through ingestion of infected fecal matter, which is microscopic. It is not airborne.

During this education process, police officers have been “very, very helpful.  They’ve stepped up in helping with the homeless population,” said Wolfe.

On Friday, officers identified a homeless man who had been living in the city for ten years. They found his mother in Louisiana, who said she would be willing to take him in.  Initially, the man couldn’t be sent back because of some outstanding warrants that were out on him.

“Our officers drove him to the court where the warrants were dismissed. He was placed on a bus to Louisiana. This was a guy who was contacted by officers several times a month. We got a homeless guy off the street. These guys are doing a lot that are not being recognized by the public.”

When The Times Advocate asked if we could publish the name of the officer, Wolfe said he wanted to remain anonymous. “He wouldn’t want any accolades,” he said.

According to Tom Christensen, of the County’s Communications Office, the San Diego County Board of Supervisors is required to review the need for continuing the emergency, which was declared on September 1, every 14 days.

The County’s public health services and community partners have given 90,735 vaccinations, including 76,982 to at-risk populations as part of the efforts to halt the outbreak.

As the number of new cases appears to be slowing down, local health officials are encouraging men who have sex with men (MSM) to get the hepatitis A vaccine in an effort to prevent an increase in cases among that population. Michigan, New York City and Colorado have all seen a recent outbreak of hepatitis A among the MSM population.

“We’re broadening our ongoing efforts to reach the MSM community because this is an area where the outbreak could potentially spread,” said Wilma Wooten, M.D., M.P.H., County public health officer. “We are encouraging people to get vaccinated to protect both themselves and their close contacts.”

The County and the San Diego LGBT Community Center are partnering to provide free hepatitis A vaccinations and flu shots to any member of the public. One event was held in October, one is taking place today until 6 p.m. and two more are scheduled on November 13 and 22 from 3 to 6 p.m. The LGBT Center is located at 3909 Centre St. in San Diego.

Locally, there have been 13 cases of hepatitis A in MSM in 2017, higher than the usual one to two cases a year, but not disproportionate to the overall number of cases in the current outbreak.

The risk groups identified by the Centers for Disease Control and Prevention since 2006 include:

• Men who have sex with men

• People with chronic liver disease, such as cirrhosis, hepatitis B or hepatitis C

Because of the ongoing hepatitis A outbreak, the County Health and Human Services Agency is also recommending that the following people be vaccinated as well:

• People who are homeless

Hepatitis A is most commonly spread from person to person through the fecal-oral route. Symptoms of hepatitis A include jaundice (yellowing of the skin and eyes), fever, fatigue, loss of appetite, nausea, vomiting, abdominal pain, dark urine, and light-colored stools.  Symptoms usually appear over a number of days and last less than two months.  However, some people can be ill for as long as six months. Hepatitis A can sometimes cause liver failure and even death.

For general information on hepatitis A, visit the HHSA hepatitis website where data are updated routinely. A hepatitis A fact sheet is also available.