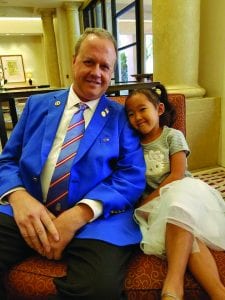 Escondido Elks Exalted Ruler Steven Wagstaff with the 2017 theme child Aya. Aya was diagnosed with a severe speech delay and also has childhood Apraxia of speech. Now with the support of the California-Hawaii Elks Major Project, at the age of 5 1/2, Aya is on her way to continuing progress in her speech. The California-Hawaii Elks Major Project has laid a foundation to continue her journey.

Wagstaff was presented with a plaque  for his efforts in his special contributions to The Elks Major Project, Inc.  Wagstaff began a fundraiser with the Chili’s restaurant in Escondido four years ago which has grown to a state-wide event every year in January for the past three years. 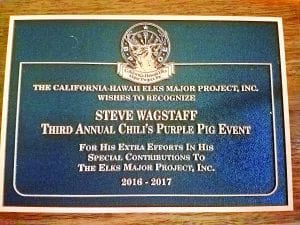 The plaque presented to Elks Exalted Ruler Wagstaff for his fund-raising efforts.

According to Wagstaff, “We are a proud organization with roots back to 1868 and thousands of Elks, who have not only helped millions of people, but are a social organization that enjoys the company of other Elks at our lodges where our meals and beverages support our growth and the community.”