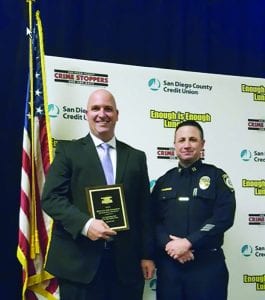 Detective Jeff Udvarhelji (left) and Captain Eric Skaja, who represented the department at the Crimestoppers banquet.

Recently Detective Jeff Udvarhelji of the Escondido Police Department was one of several area officers honored with the Crime Stoppers “Enough is Enough” Award. The awards banquet, held on April 20 at the Doubletree Hotel in Mission Valley, hailed the detective for his work in catching a registered sex offender who was luring young victims via social media.

In March of 2016 he received an ICAC referral. Although his normal duties are fighting child exploitation within the city of Escondido, as part of the ICAC task force he routinely is referred cases within the area.

This time he was referred a case from a resident of unincorporated Escondido (i.e. part of the County.) The Escondido police took a “courtesy report” and forwarded it to the Sheriff’s Department. The deputies recognized that the case had an internet connection and forwarded it to Udvarhelji.

The victim was a 16-year-old girl living just outside of Escondido. The suspect, as determined by his computer’s IP address, lived in Oceanside. There is an ICAC affiliated officer in Oceanside, but because the victim lived in the County, Oceanside deferred the case to Escondido.

“We had the original report, the victim was close to our jurisdiction and I had no problem following up on it because I recognized we needed to move on this very rapidly,” recalls Udvarhelji. “When I read the report, I learned that the suspect had already showed up at the victim’s house.”

From the time Udvarhelji got the case until they took the suspect into custody was five days. Meantime Udvarhelji wrote five search warrants and reviewed social media transcriptions that the victim had kept and familiarized himself with the suspect, Rennard Cawkwell, 47, whose previous crime was for luring a minor “for purposes of sexual interaction.”

Cawkwell had been convicted in 2009 and was still serving probation when he contacted his latest young target on Meet Me, according to Deputy District Attorney Keith Watanabe, who was interviewed last year by Fox News.  Watanabe told Fox News “He developed an online relationship with a girl who was 16-years old. He was posing as 17-year-old boy named Rennie Pearlwater.”

The conversation moved to Facebook, and that’s when the victim’s parents became suspicious and ordered her to cease all contact with a person that she believed was a teenage boy.

As Udvarhelji describes it, “The victim was a 16-year-old girl. She was on several social media applications to develop friendships. One thing we have seen is you have a significant number of sex offenders on those sites to meet kids. In interviewing her we learned that she had started to have a communication with the suspect who used a photo of a real kid.

“He had spent several months communicating with her and building an online relationship. Unfortunately, she bought into it and thought it was legit and developed feelings for him,” he said.

Amazingly, Cawkwell had convinced himself that, in spite of his age, he would be able to continue the pretense of being a teenager.

In spite of having encountered an adult at the victim’s house, Cawkwell visited the house a second time. “Once I discovered that he had been to the house on two occasions, I knew we needed to move on him pretty quickly,” recalls Udvarhelji.

Through his computer’s IP address, Udvarhelji was able to come up with an actual residence for the suspect—and that’s where they served the search warrant. Cawkwell lived at a residence with another family member. There was no indication that he was working.

Udvarhelji said, “One thing I thought identifies the significance of the work that ICAC does is that when we seized one of his devices he had been communicating with hundreds of kids around the nation and we identified child pornography on his computer.”

Udvarhelji looked through those photos and was able to identify a piece of material in the background that matched other photos the victim had taken of herself. “Looking through social media we determined we had a new live victim of child pornography. Any time a new photo is manufactured that is a new series,” he said. And a new crime.

Udvarhelji worked with an agency in Northern California to identify the victim, who was 13 at the time of the photo. Typically, says Udvarhelji, suspects will entice victims to take the photos and send them. So, there was a fresh charge to add to the others: possession of child pornography.

Udvarhelji had no idea he was going to be recognized at the Crime Stoppers banquet, where each agency nominates and recognizes an officer or investigator for the annual Enough is Enough Award.

Udvarhelji is doing his dream job. “I got into law enforcement to do the exact thing I’m doing right now, child abuse and exploitation. I knew I would have to work cases specific to our department, as technology evolves there is a need to become very skilled to conduct investigations that are technical in nature.

Internet Crimes Against Children (ICAC) is a nationwide task force that cities belong to. One of his partners, Damian Jackson, and he are both assigned to ICAC and the FBI’s Child Exploitation Task Force.

Children are exposed to a hailstorm of electronic media. “More and more you have predators who go online because they know it is a target rich environment.” This puts the police in the position of having to react.  Udvarhelji probably attends 100-140 hours of classes a year to keep up to speed. “One thing we are trying to do is provide parental information because kids don’t get a phone or a tablet without parents buying them. If we can get parents to mitigate their kids’ activities online, it is very helpful.”

He also goes to schools and gives presentation to students.

One response to “Local detective recognized for stopping a sex predator”