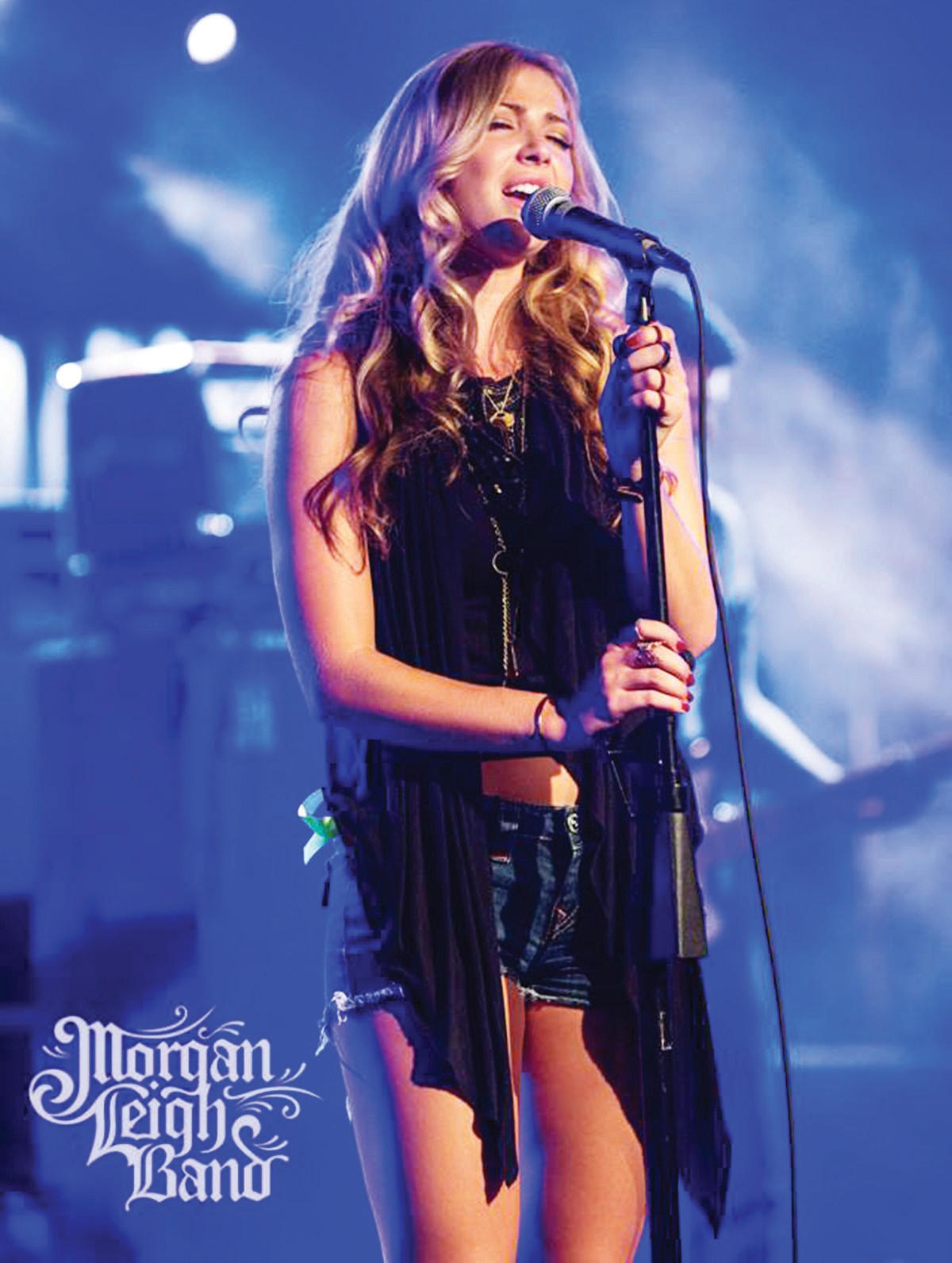 Leigh can knock fans dead with both her voice and her looks.

Morgan Leigh is close. Oh, is she close!

Already an accomplished and dy­namic performer at the still rather tender age of 23, Leigh is akin to the lights-out baseball prospect that is primed and destined to break into the major leagues.

She is clearly on the cusp of the big-time, perhaps one of the next happening stars in Country and Western music. “I think we’re right on the edge of that inner circle,” Leigh says of the six-member band that she fronts. “We’ve got momen­tum going and we’re starting to take some really big steps.”

Few doubt that Leigh possesses the requisite talent, drive and per­sona to make a huge splash on the national scene. In the opinion of industry insiders, her breakthrough isn’t a matter of if but rather when. So don’t doubt for a moment that it’s going to happen. She’ll be ascending to that next rung soon enough. Star­dom will become her companion as sure as the sun will rise.

And why not? If the 5-foot-5 Leigh doesn’t have the full pack­age, you’ve got to think long and hard to come with up something that’s missing. The voice is spot-on, penetrating, expressive and with the exact seductive/suggestive sound that today’s Country craves. The looks? We’re talking knockout stuff, whether gussied up or going casual with a just a modicum of makeup. And her megawatt smile takes you right in and never lets go.

What’s more, she is a bona fide presence on stage, dancing, shaking and stomping around to great effect, playing up to both her band mates as well as the crowd. When you watch Leigh in revved-up performance mode, you’re left with one lingering thought: What’s not to like?

It’s been an interesting journey for the Valley Center girl whose dreams of entertaining began when she used to sing karaoke to herself in a se­cluded bedroom. Growing up, Leigh took part in dance and local theatre, once giving the role of Sandy a turn in a production of “Grease.” Being on stage was something she felt an affinity for.

By age 15, the aspiring Leigh har­kened to her calling and began sing­ing professionally. It was at this time that her tastes in music began to ex­pand and she started taking a liking to Country, a genre that previously hadn’t interested her.

But once exposed to titans of Country music like Patsy Cline, Lo­retta Lynn and Carrie Underwood, Leigh was drawn to the sound and the down-home messages that it conveyed. Besides, perhaps Leigh intrinsically knew that she wouldn’t find a more suitable and promising vehicle for that pure voice of hers. Oh yeah, she had the ability to sell a pop or rock number but with Coun­try tunes, Leigh was knocking them out of the park.

The Morgan Leigh Band was formed in 2012 and debuted at the San Diego Fair in 2012. Over the years, there have been a few per­sonnel changes but the right mix and chemistry now seems to be in place.

“We really get along and have a lot of fun,” Morgan says her five male band mates that range in age from 23 to 34. “I’m just thought of as one of the guys. And we’re all committed to being in this for the long run. No one plans on going anywhere.”

The ML Band has developed a growing reputation for being a high- energy and hard-drivin’ group that gives off the vibe that it could keep the party rockin’ all night. Any stage that it occupies pulsates with inten­sity and kinetic power. Yes, you can feel the heat. It has become, without question, one of Southern Califor­nia’s most recognizable and sought- after Country acts.

As such, the word has clearly got­ten around about Morgan and crew. It’s irrefutable that they’ve been carving out both a name and niche for themselves.

Need proof? Well, the band has been an opening act for such high-profile entertainers as Pat Benatar, Sammy Kershaw and Juice Newton. And just this past fall, at the Valley View Casino Center, the group en­joyed the exhilarating rush of preceding on stage C & W superstar Garth Brooks, an experience Leigh will for­ever remember and treasure.

“He is such a great performer,” Morgan begins. “And such a really nice guy. But more than anything else, I saw firsthand what it means to be dedicated, work hard and be a true professional. Seeing that was very influential as well as inspiring.”

To date, the ML Band has produced one CD and is currently working on another. Their first project was fitting­ly entitled “Trouble” because it spoke of ex-boyfriends, disappointment and circumstances that were far from ide­al. It was well received 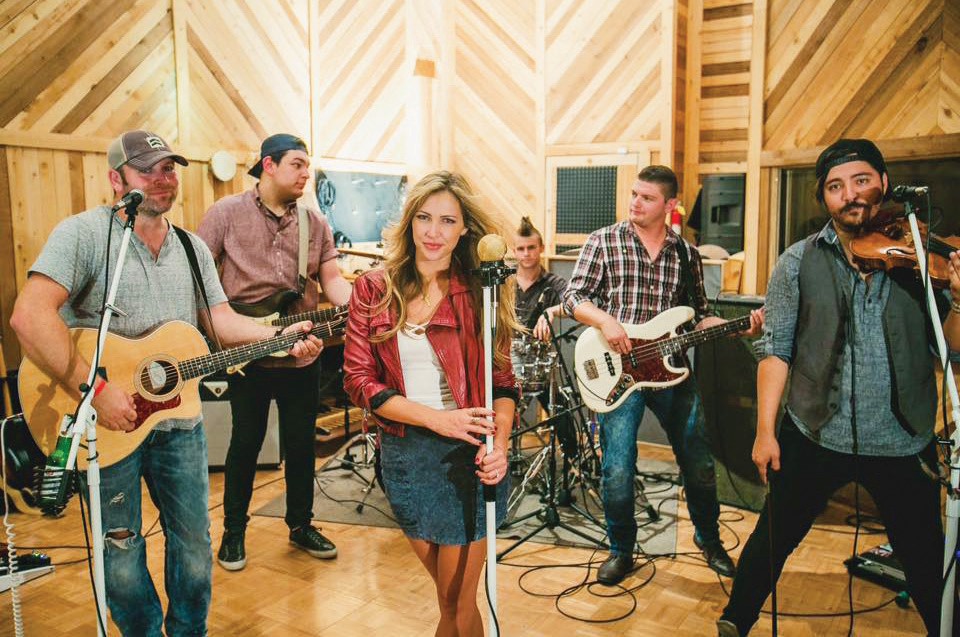 Morgan Leigh has assembled one of Southern California’s most prominent Country bands.

and sold out its initial release. The ballad “Foolish” and the kicker tune “Good Time” are two cuts that showcase Leigh’s con­siderable range and versatility.

On November 6, 2015 Leigh and her guys signed on with Pacific Records, based out of San Diego. Already hav­ing gotten in valuable studio time for their latest collaboration, look for this anticipated effort to become available sometime in the spring. According to Leigh, this undertaking will be much more positive than the last, focusing primarily on “falling in love and being in love.”

The material that the group uses for its’ CD’s is original, with Leigh and guitarist Paul Coughlin being the cre­ative forces. Having written together for years, the two have developed a genuine rapport, a proven methodolo­gy and a sense of what works. Though they will occasionally switch roles, Morgan serves primarily as a lyricist while Coughlin takes care of the mu­sic end.

This coming year is expected to a busy and opportunistic one for the ML Band, with plans to significantly expand its touring schedule. Summer will be a particularly lively with for­ays into locations like Illinois, Ohio and Tennessee, where the group hopes to connect with a brand new audience. Securing dates in other distant places and states is also being contemplated.

But foremost in Leigh’s mind is to maintain and grow the pres­ence that the band has fostered in the Southern California and neighboring environs. At least for the foreseeable future the ML Band will continue to sink its roots locally and in the South­west (read Arizona), plying their trade at such intimate venues as the House of Blues (San Diego), the Cave (Big Bear Lake), the Ranch Saloon (Ana­heim) and assorted others. Strengthen­ing their ties to the region from which they sprang is a high priority for Mor­gan and her crew.

The type of Country sound Leigh brings to bear is different from the kind that typically comes out of the Nashville, which she says tends to be more classic: “What we’re offering is something I call So Cal Country, which is a combination of pop, rock and country. It’s a twist of all those el­ements and it’s something that we’ve kind of made into our own.” Based upon the results, it’s not only working, it’s cutting across and reaching differ­ing demographics.

One of the more interesting reali­ties about Leigh is that her on-stage persona contrasts sharply with who she is when not performing. In to­day’s Country, seduction and being on the wild side sells, especially when coming from a female performer. Leigh has no difficulty slipping into that role, able to convey an assertive, good-time woman who’s probably too much to handle. She can play the irre­sistible temptress or the rousing party girl to a ‘T.’

However, away from the limelight, she’s easygoing, relatable and warm, the girl-next-door that nearly every boy dreams about. “I’m definitely a different person when I’m on my own time,” she shares. “I’m pretty reserved. For sure, dressing risqué and getting a bit crazy isn’t how I am. That’s really not me.”

But on stage, she has a part to play and Morgan can work it for all it’s worth.

Leigh’s glossy and eye-popping resume is extensive. If fully detailed here, this article would be as lengthy as a James Clavell novel. But a couple of items are more than worth mention­ing.

Morgan scored a huge accomplish­ment when she made it all the way to Hollywood Week on American Idol, which she describes as “an amazing experience that obviously gave me some unbelievable exposure.”

And then there was the genuine thrill of having the opportunity to sing the national anthem before a San Di­ego Padre game this past July. “I was really nervous,” she admits. “And I was so worried about either mess­ing up or forgetting the words.” Ulti­mately, she came through with flying colors but not without having to deal with a tricky circumstance. It seems as if there was a noticeable delay be­tween what she was actually singing and what was being overheard on the loudspeaker system. The discrepancy proved to be disconcerting but being the consummate pro she is, it didn’t throw her and she’s been asked to re­turn in the near future.

In truth, the picture couldn’t be much brighter for Leigh. She’s got a kick-ass band backing her, momen­tum is clearly on her side and the road ahead looks remarkably free of detours. She can see the signpost in the near distance and it should take just a little while longer to get there. What it says tells you all about Mor­gan Leigh and where she’s headed. It simply reads – Next Stop:  Stardom!