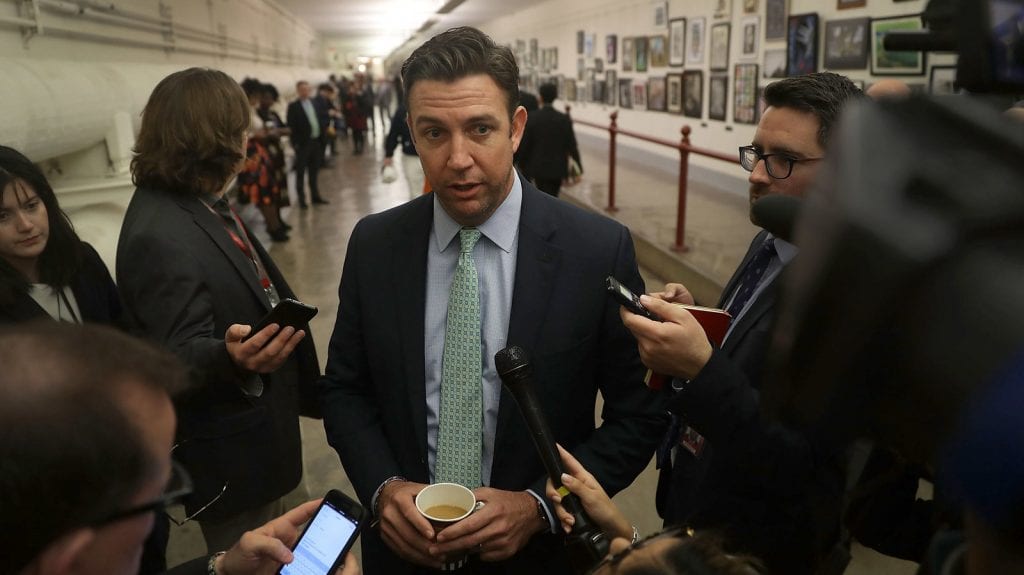 Congressman Duncan Hunter Jr. of the 50th District and his wife Margaret were indicted Tuesday by a federal grand jury on charges of fraud and campaign violations., in essence using campaign funds for personal use.  The indictment was filed in the U.S. District Court for the Southern District of California.

The 47-page, 60-count indictment spells out the government’s case against the congressman, beginning in June 2008 when he succeeded his father, longtime Republican Rep. Duncan L. Hunter, of what was then the 52nd District.

The 41-year old Congressman attacked the indictment as “politically motivated,” as to the timing, coming as it does just 11 weeks before the Mid-term elections, and could deliver Hunter’s seat into the hands of the Democratic challenger who garnered 16% of the vote in the June primary.

In a letter to Deputy Attorney General Rod Rosenstein on August 6, Hunter’s attorney Gregory A. Vega, writes: “Because California employs a ‘jungle primary’ process, an indictment brought just after the June primary but before the general election – which is what we understand the Southern District intends to do – will result in a solidly Republican district being handed to a Democratic candidate who garnered a mere 16 percent of the vote in the primary. Under California election law, these two candidates must appear on the ballot, and there is no mechanism for the Republicans to replace Congressman Hunter on the ballot after June 5th.”

Vega also writes: “The Southern District’s truncated process supports the conclusion that its prosecution of Congressman Hunter is politically motivated. Congressman Hunter was the first sitting member of Congress to endorse President Trump in February 2016, and he has been an outspoken supporter of the President ever since. As discussed in more detail in the attached Exhibits, key members of the prosecution team attended a private fundraiser for Hillary Rodham Clinton’s presidential campaign (without making the contributions that all other attendees were required to make ) prior to opening this investigation. The only way these two Assistant US Attorneys were able to attend was by use of their official positions as Department of Justice employees. The overt political leanings of two individuals intimately involved in the investigation, combined with, among other things, the Southern District’s sudden, inexplicable rush to indict my client before the general election without affording him sufficient due process, create an actual and/or apparent conflict that cannot be ignored.”

Nevertheless, the facts presented in the indictment are damning:

In 1998 Hunter married Margaret, who between 2010-2017 was listed as a management services consultant and was paid $116,000 out of campaign funds during this period.  The indictment notes that during this period “the couple spent substantially more than they earned.” They overdrew their bank account more than 1,100 times during a seven year period, incurring $37,761 in overdraft and insufficient funds charges.

In fact, Hunter came under such financial pressure that he sold his home in Alpine and moved into the home of his father, the former congressman.

“By virtue of these delinquencies as well as notifications of outstanding debts and overdue payments from their children’s school, their family dentist, and other creditors the Hunters knew that many of their desired purchases could only be made by using Campaign funds,” says the indictment.

From 2009 to 2016, says the indictment, the Hunters conspired to convert campaign fund to personal use; to defraud the campaign, and to falsify records that were filed with the Federal Elections Commission.  Hunter obtained a campaign credit card for his wife, “at a time when she had no official role with the campaign and received no official salary, knowing that she would spend Campaign funds for the Hunters’ personal benefit,” and despite protests of the campaign’s treasurer.

The indictment adds, “The Hunters disregarded rules implemented by the Treasurer to track legitimate expenses (such as not purchasing gas using Campaign funds, withdrawing cash 22 times from ATMs, using petty cash without keeping a proper record of how it was spent, and failing to provide receipts which listed the names of donors and volunteers with whom  Margaret Hunter claimed to be spending Campaign funds), and, when pressed by the Treasurer to comply, dismissed the rules as silly.”  Hunter also accused staff members who protested these irregularities of “disloyalty.”

The Hunters, says the indictment also reported fraudulent charges to the bank that issued the campaign credit card in order and later to the FEC to disguise the family’s purchases of video games.

The indictment also alleges  “The Hunters monitored the amount of cash on hand that was maintained by the Campaign, and would moderate their theft of Campaign funds when the account was excessively low or depleted.”   They used campaign funds to buy hotel rooms, airline tickets and upgrades, meals and food, vacations for themselves and their friends and family, including more than $14,000 for a family Thanksgiving vacation in Italy and  more than $6,500 for a family vacation to Hawaii.”

The indictment spells out 200 such transactions using the campaign credit card. It then lists 44 counts of alleged “wire fraud.”  An example: “An email from Margaret Hunter to the Treasurer providing false explanations .for campaign expenditures.”

Hunter’s challenger, Democrat Ammar Campa-Najjar quickly issued a Campaign Statement on Hunter Jr. Indictment: “The division, chaos and corruption in Washington has gone too far. Today’s indictment confirms just how deep this corruption can reach when someone like Duncan Hunter Jr. is in it for himself instead of representing the people.”

Campa-Najjar added, “Now is the time to put country over party and rise against this corruption and rise above the divisive politics. Together, we can bring real change and fresh thinking to represent the people of CA-50.”

The Democratic Party is very publicly licking its chops at the prospect of bringing down the incumbent of one of the most Republican districts in California. DCCC Communications Director Meredith Kelly declared Tuesday night: “Just a few weeks ago, another House Republican – Congressman Chris Collins – was indicted on the felony of securities fraud, wire fraud, and false statements. Given Hunter’s longstanding and widely covered ethics issues, the DCCC has had CA-50 on our target list since the start of the cycle.”