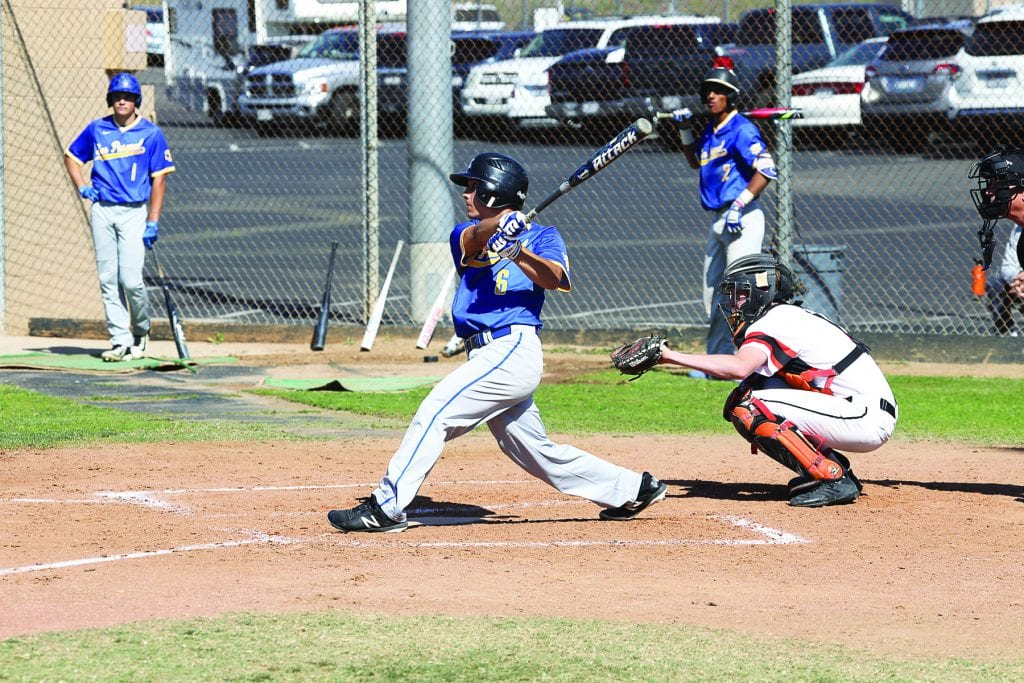 Catcher Connor Oca has been one of the big reasons why San Pasqual has experienced a baseball revival this season. Photo by Lenny Kerbs

With the regular season coming to a swift end and the playoffs looming dead ahead, it’s time to take a look at how the local prep diamond teams have fared and how promising, if at all, are their postseason prospects.
Calvin Christian (13-6, 9-1) – The Ocean League leading Crusaders will finish out the regular season campaign with a pair of games against its nearest challenger, the Rock Academy. A solid offense has been a key for Calvin with four players having produced 27 hits or more while four have driven in at least 20 runs and three have scored a minimum of 26 runs.
Swinging the most potent bat has been Zeke Shockley who has raked at a sparkling .593 clip while producing 24 RBIs and 12 doubles. Bryce Lovisa (.492), Andrew Garcia (.449) and Anthony Coseo (23 ribbies) have also swung the sticks to great effect.
On the mound, the versatile Lovisa has been the stalwart, putting up gaudy numbers (6-0, 1.77 ERA) that reflect his dominance. Shockley has also been a force on the bump as his 3-1 record and 3.19 ERA would indicate.
Ranked 7th in the Division 5 Power Rankings, the Crusaders are perfectly capable of doing some damage in the postseason if their heavyweights Lovisa and Shockley continue to rise to the occasion.
Classical Academy (17-8, 6-1) – There’s no denying that the Caimans are on a mighty roll, having won their last eight contests with one game remaining with Tri-City Christian. And with a hitting attack that features seven hitters rapping away at better than .300, scoring runs is not an issue for this group. Big bats abound in the CA lineup with players like junior Noah Dull (.376, 32 H), Zack Jordan (.318, 21 H, 18 RBI), the muscular Ian Peters (19 RBI) and Trevor Blount (20 H, 18 R) igniting things.
Couple that with a formidable one-two pitching combination of Peters (6-2, 1.32 ERA) and junior Tim Boshaw (1.76 ERA) that can really take charge and it’s no wonder the Caimans are prominent players in the Pacific League.
Currently, Classical is positioned 9th in the Division 3 Power Rankings. Last season, the Caimans seriously chased a title making it all the way to a championship round. With many of the same pieces still in place and in the midst of another splendid campaign, CA looks poised to make some additional noise in the postseason.
Escondido (10-15, 4-8) – The Cougars have struggled down the stretch with their inability to score runs being greatly responsible for a six-game losing streak. Esco’s surprising record at home (3-10) was also a huge disappointment.
But this relatively young team, despite its proven coaching and legitimate talent, just never really put it together. Yes, junior Juan Cervantes was a consistently productive hitter and strongman Garrin Jackson displayed the wherewithal to mash the ball far and deep. Moreover, catcher Shawn Moskowitz, infielder Brenden Garcia and Victor Seneres were also factors at the plate but they needed additional help from their mates.
Because Escondido is ranked 20th in the Division 2 Power Rankings, their fate seems decided with little chance of making the postseason.
Escondido Charter (11-15, 1-6) – Like their fellow cats the Cougars, the White Tigers have dropped six in a row and find themselves bringing up the rear in the Pacific League.
And yet, there’s still much to like about this EC squad. Freshman Julian Nunez has been an absolute revelation with the lumber (.456, 36 H, 21 RBI) while teammates Devin Stinnett (.386, 21 RBI) and JR Lucas (.314) have definitely made their presence felt.
Moreover, the White Tigers have one of the best leadoff men in the County in the person of the dynamic Tristan MacMahon (.389, 17steals) who can kickstart an offense like very few can.
Should EC qualify for the postseason and if Tristan and his younger brother Chase MacMahon (2-2, 0.16 ERA) can get it done on the hill, Charter will not be an easy out.
Orange Glen (12-13, 8-1) – When looking at the Patriots record, the two things to focus on is that they currently sit atop the Pacific League standings and that they have captured five of their last six outings. In other words, they’re trending just right. Even more encouraging is that as of late, the Pats’ attack has been wreaking havoc at the plate, having thrice scored 13 or more runs in the past three weeks.
It seems everywhere you look, there’s a dangerous batsman to be found; be it Nathan Kell (.432, 32 H, 25 R), Victor Banuelos (.338, 25 H), Jacob Merrick (.329, 27 R) and Dylan Ewing (19 RBI).
The immensely talented Kell is also a major asset on the hill, having become OG’s go-to arm while making 14 appearances and posting some pretty impressive numbers (5-4, 2.11 ERA).
Carrying a Power Ranking of No. 6 in Division 5, the Pats are an absolute lock for the playoffs. With onegame left with Pacific Ridge, OG hopes to maintain its momentum before it embarks on postseason play.
San Pasqual (18-10, 9-3) – The Golden Eagles have experienced a remarkable revival under first-year coach Jake Blalock. Winners of six in a row and firmly ensconced in second place in the Valley League, SP is hitting its peak at a most propitious time.
A clutch and productive offense has really helped with four G. Eagles having delivered 23 hits or more. Among the more notable contributors have been Connor Oca (23 RBI, 9 D), Josh Tuttle (.333, 31 H) and shortstop Elijah Jackson (.354, 28 H).
Throw in a dynamite pitching tandem of lefthander Jansen Lublin (5-2, 2.33 ERA) and senior Andrew Walsh (6-3, 2.07 ERA) and you’ve got a fairly complete package primed to compete.
After a long while in the wilderness, Blaylock has the SP program back and making an impact. With an enviable ranking in Division 4, it’s going to be fascinating to see if the G. Eagles can keep it rolling when the stakes get ramped up even more.