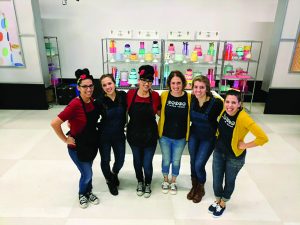 Readers who have been following the career of Escondido’s Linda Caro, owner of Little Hunnys Cakery gathered around their TV sets on Monday night to watch the Food Network’s “Cake Wars Champs,” where she competed against previous champs.

She came in second. “Not bad for a home baker next to a full bakery,” she said on Tuesday. “They were amazing.”

Caro, who was sworn to secrecy about the results of the contest in between the time it was videotaped and the time it was aired, described the experience. “Round one I made a pear and beer cake with a bleu cheese Italian meringue buttercream with candied walnuts and dried cranberries. The design was a baker Lego girl who was frazzled and covered in cake batter because she only had 75 minutes to make her cake from start to finish.”

The judges judged all four returning champs and then eliminated one team. “We advanced to round 2. I made a lemon cake with raspberry Italian meringue buttercream with fresh chopped raspberries and roasted pistachios. The design was a Lego world built by the Lego men themselves,” she said.

The bottom tier featured a police station on one side with a police officer chasing a bad guy, a police chief eating a donut, a Lego police dog, and a Lego painter painting the police sign. The other side featured a fire station with the front of a fire truck and a fire fighter putting out a fire. 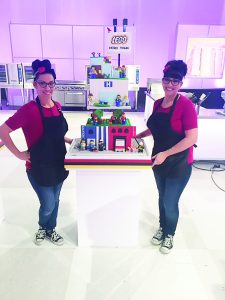 Linda Caro (right) and her assistant Alicia Becerra stand next to the Lego cake that won second place for Little Hunnys Cakery.

“On top of that we have a park scene with construction workers holding Lego bricks building the park. The next tier up is a hospital featuring a nurse and a Lego guy on a stretcher, a doctor running to help, and a nurse Lego and then on top of that is a Lego house with a mommy and a baby Lego and a Lego cat. And some more construction workers helping to put the house together,” she said.

“On the very top of the cake is the Lego billboard with real working lights that says Hero Town which is what our cake is about— featuring everyday heroes,” she said.

In round 3 they were all judged on flavor and design. After another round of judging, one of the contestants was sent home. In the final round, it was down to Caro of Little Hunnys Cakery and Kristina from Baked.

“They announced that Kristina won and I was so happy for her! She’s an amazing baker and a really nice person. I was proud to come in 2nd place next to her!” she said.