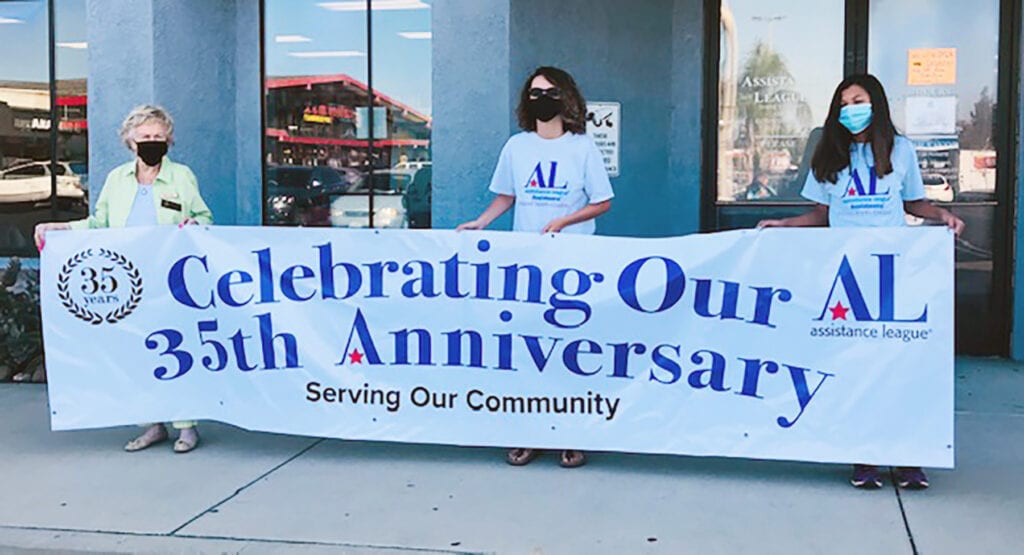 Presenting the local Assistance League’s 35th anniversary banner are (from left) Marti Ferry, one of the organization’s founders, and two members of the Assisteens school auxiliary Ava Senise and Leah Bernstein.

This past Saturday, Inland North County Assistance League launched celebration of its 35th year as a local chapter of the national Assistance League, highlighting both its formation in 1985 and its pathways to the future.

On hand for rollout of the celebration, at the organization’s Thrift and Consignment store (2068 E Valley Pkwy), was Escondido resident Marti Ferry, one of the three initial organizers of the local chapter, and several members of the organization’s school auxiliary, Assisteens, formed to promote the ongoing importance of community service.

Ferry says that, initially, she had been a long-time volunteer of the San Diego Assistance League, but — because then a Lake San Marcos resident — had tired of the necessary commute and saw the need for a local chapter. So in 1982 Ferry met with Mary Malone, of Escondido, and Genie Jenson, of Rancho Bernardo, to strategize a recruiting effort.

They teamed with five other women to form a chairing committee and created a guild. With a group of 79 women, the organization was then officially chartered by the national Assistance League in 1985. They went on to establish its first thrift store operation, in a small rent-free building on South Escondido Boulevard.

That first store, named the Bargain Box, was “sort of a shoebox,” Ferry says. “It was very minimal” — a cigar box serving as a cash register and suggesting just how minimal, according to the organization’s website.

Now, at age 95, she expresses a well-deserved satisfaction with the organization’s 35 years of growth and service. She worked for 33 of those years as a volunteer, problems with her eyesight forcing her “retirement” in 2018.

“I’m very proud of this organization. It’s amazing, the cooperation of all the members,” says Ferry.

Inland North Assistance League operates eight different programs focused on providing different types of assistance to school children and families in need, in Escondido and nearby communities. And as a way of passing along the value of community service to future generations, its Assisteens program recruits students (grades 7 through 12) to help with its various service activities.

The league’s website lists a variety of ways Assisteens worked in local chapter activities. As examples:

• assembling hygiene kits for Camp Pendleton and for clients in the Palomar Pomerado Health Behavioral Unit;

• sponsoring and hosting Christmas and Easter parties for children at Interfaith Community Services;

Saturday’s opening celebration was the first day of participation for Jenna Divon, a sophomore at West View High School, helping to organize items for the day’s sales. She says she was first encouraged by a friend to come to an initial meeting discussing the program. Further meetings resulted in her Assisteens membership.

“Since COVID-19, Assistance League of Inland North County has had to reassess and re-imagine how to proceed with our eight philanthropic programs,” Chambers says. “We have faced many challenges and are marching forward. Our recent award for being the No. One Non-Profit in District 75, by Assemblywoman Marie Waldron, is testament to our dedication and service in our community.”