Local artists playing in “Bach and Beyond” Baroque concert April 5 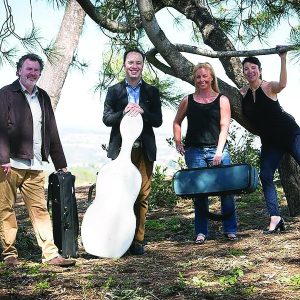 Baroque musicians. Healy Henderson (blond woman); the brunette is Alison Luedecke; the owner of the white cello case is Alex Greenbaum and the male violin player is Pierre Joubert. All will be performing at “Bach and Beyond.”

Henderson will join SD Baroque Soloists for a “Bach and Beyond” concert. Healy has played with SDBS before, but this event will be a bit of a return for the group, from which she has been absent.

Healy Henderson is a musician’s musician. She plays violin regularly in concert and teaches widely throughout Southern California. She performs classical and baroque music as well as being solo violinist/fiddler for 11 World Premiere Musicals at the La Jolla Playhouse and the Old Globe Theater.

She has played with SD Baroque Soloists before – both as part of the ensemble and as Assistant Concertmaster for Orchestra Nova, but her busy schedule has kept her away from them lately.

Now Henderson has been able to reunite with SD Baroque Soloists, who specialize in the rock stars of the 17th century, including Purcell, Boyce, Eccles and Handel (San Diego Reader, www.sandiegoreader.com/bands/san-diego-baroque-soloists/) – for a “Bach and Beyond” concert.

The concert is put on in celebration of Bach’s birthday. It will showcase the genius of Johann Sebastian Bach, with two of his most well-loved and profound works (the 2nd Suite for solo cello and the Sonata no. 6 for violin and harpsichord) set alongside trio sonatas by Handel, Corelli and Telemann.