Architect Ken Erickson has a dream about the Escondido library. It’s a dream he has developed over a period of a dozen years or more in conjunction with several other members of the community, whose motto is think BIG and who several years ago formed a group called People to the Park.

The Escondido native and this group, in the early 2000s, came together to talk about a larger vision for the Escondido library. After being discussed for several years, the idea went dormant until 2015.

“I give John Masson [on the Escondido City Council] credit for bringing the idea back to life,” said Erickson, whom I recently sat down with at a table at EscoGelato, downstairs from his office on Kalmia. “Back in 2015 I was talking to John about the idea of expanding the library. The library has been trying to expand for many years. John said, ‘Let’s do it in the park.’ ”

Such an ambitious plan would require putting a bond issue before the voters of Escondido. Two years ago, the city council gave direction to staff to begin studying ways to realize what city staff estimates would be a $50 million project.

Erickson wants to use the fact that 1,400 people a day use the library and leverage those numbers to increase the life of the park. “The park needs to be activated,” says Erickson. “This would do it. Right now they will walk or drive here to use the library. There would be more chances they would use this park. It would make our park more like Balboa Park, only smaller.” 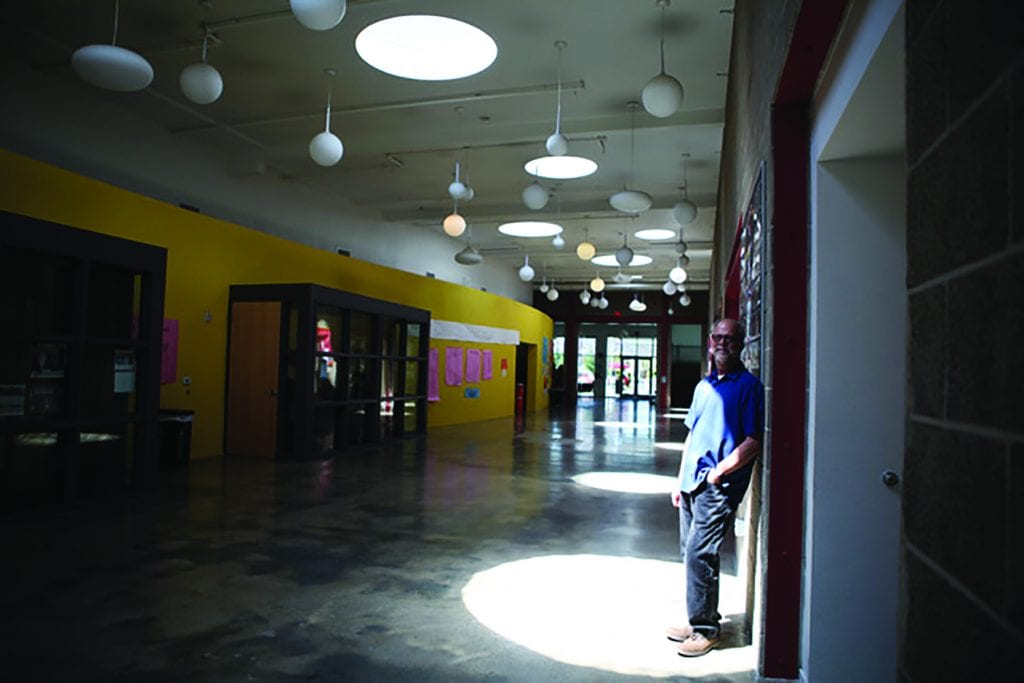 Architect Ken Erickson in the Classical Academy, which he redesigned from its former incarnation as the old North County Times building.

For several years, beginning in 2004, when the economy had started to recover after 9/11 Erickson slept, ate and lived with the concept, sparked in part because, as an architect he became interested in how people live and work together in urban areas.

As Erickson describes it. “It was a time when the economy was doing well and the renewed interest in living and working in urban areas had arrived in Escondido. As a result, higher-density housing and mixed-use projects were being proposed and planned in the Downtown area.”

Wanting to direct and not hinder the anticipated development of housing, mixed use projects and new businesses, the city initiated a review of the Downtown Specific Plan. Erickson recalls, “I was a member of a committee consisting of city staff, business owners and design professionals that was charged with assessing density, design guidelines and infrastructure. Believing that more residents would work and live in downtown, I wondered if in the future we would have enough dedicated civic open space.”

He added, “If we don’t do this now and all this development happens, we are going to miss out.”

He had spent town in both Boston and London. “I saw firsthand how integral parks are in the everyday lives of their residents and became convinced we would need more dedicated open space. To meet that need, expanding and revitalizing Grape Day Park became the focus.”

They formed an informal working group that they call “People to the Park.” Over a dozen years or so this group of interested residents and architects met to discuss and debate the concept of the expanded park and what uses would be most appropriate.

In the last year, with the renewed interest by the city council, Erickson, Steve Nelson, a community business leader and former city attorney and Brad Burke, an architect and downtown property owner, have formalized the group. “Our purpose is to share the concept and vision through community outreach and to help shepherd the project through to completion,” says Erickson.

Grape Day Park has been at the center of the city’s development from the beginning of its history in 1888. Until the 1960s the park hosted many community events.

As Erickson recalls, “Having grown up in Escondido, I have fond memories of family picnics, strolling along the meandering course of the Escondido Creek, swimming at the ‘Plunge’ and attending softball games with my dad.”

When the city hall opened at its current location 30 years ago, followed by the California Center for the Arts, the park became a different sort of center for the city,

“While the expanded and revitalized Grape Day Park will once again change its character, it is a worthwhile endeavor to re-establish it to its historic place as the civic heart of Escondido,”  says Erickson.

Erickson gives four reasons for expanding the park: open space, a pride of place, elevate the quality of life and economic development. There are six ways the city can use the park to grow the economy:

• Affluent retirees are attracted and retained

• Knowledge workers and talented are attracted to live and work

• Homebuyers are attracted to buy homes

• The area around the park will begin to attract small businesses

The park already has a city hall and the arts center.

The New Library would be located at the corner of Washington & Escondido Boulevard, and would anchor the expanded park’s northwest corner.

Erickson envisions a four-story library, with the first two floors occupied by the library itself and the rest available for lease and other civic uses.

The street facades, “should have a strong civic scale and presence while its park side could provide outdoor reading and gathering space on the terrace and café for a more informal pedestrian scale.

Says Erickson, “This area’s location should draw people into the park and offer views into the park.”  He also proposes an observation tower, so visitors can see their surroundings and the downtown, the surrounding hills and “Hidden Valley.”  Erickson envisions this tower, similar to the familiar City Hall dome, becoming an iconic symbol of the library.

The plan includes a Community Gymnasium and Pool at the corner of Washington & Broadway, anchoring the northeast corner of the expanded park. There would be two new pools, one 25 yards long, and a children’s pool.

The “Promenade,” which would include gardens and gathering spaces, would be built over one level of subterranean parking. There would also be four levels of parking, with 900 spaces that would replace the existing surface parking that would be given over to the new buildings.  “To add activity to Escondido Boulevard and park and to diminish the aesthetic impact of the parking structure, a mixed-use wrap is being proposed,” says Erickson.

This proposal also includes housing, over one level of park, below the grade and 4-5 stories above the grade. This housing downtown, would, “help activate the park,” says Erickson.

The plan also includes restaurants with outdoor dining, which would attract people to enjoy the park, and a pond that would “bring both visual and physical relief” when it’s warm.

The History Center would remain unaltered.

The Escondido Creek’s concrete channel through the park, would be altered, “to be more aesthetically pleasing.”

A new tree median would be added to Broadway, to soften and narrow a wide street, “that is not pedestrian friendly” as Erickson puts it.

If you want to know more about People to the Park, email threm at PeopletothePark@gmail.com. 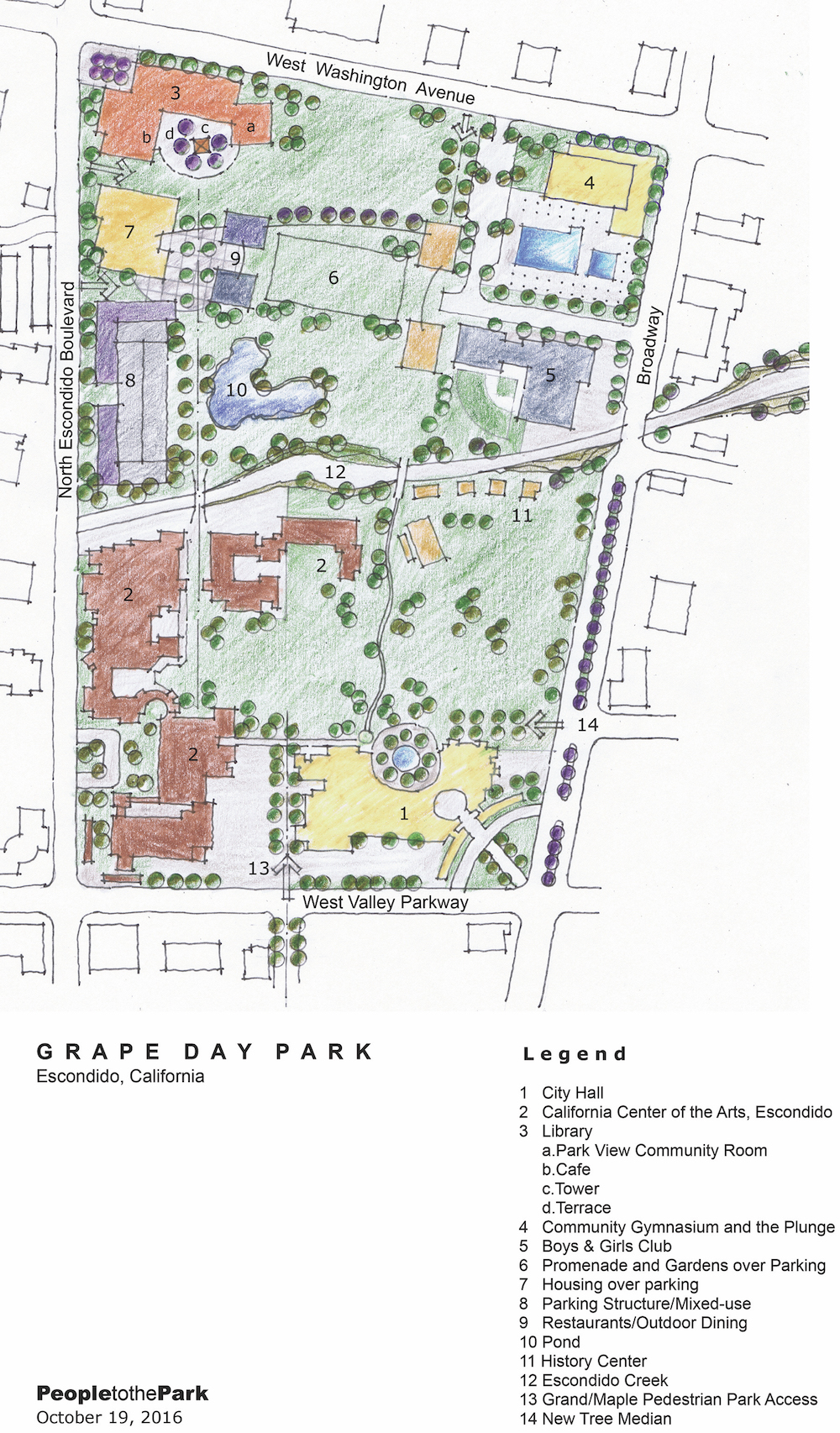