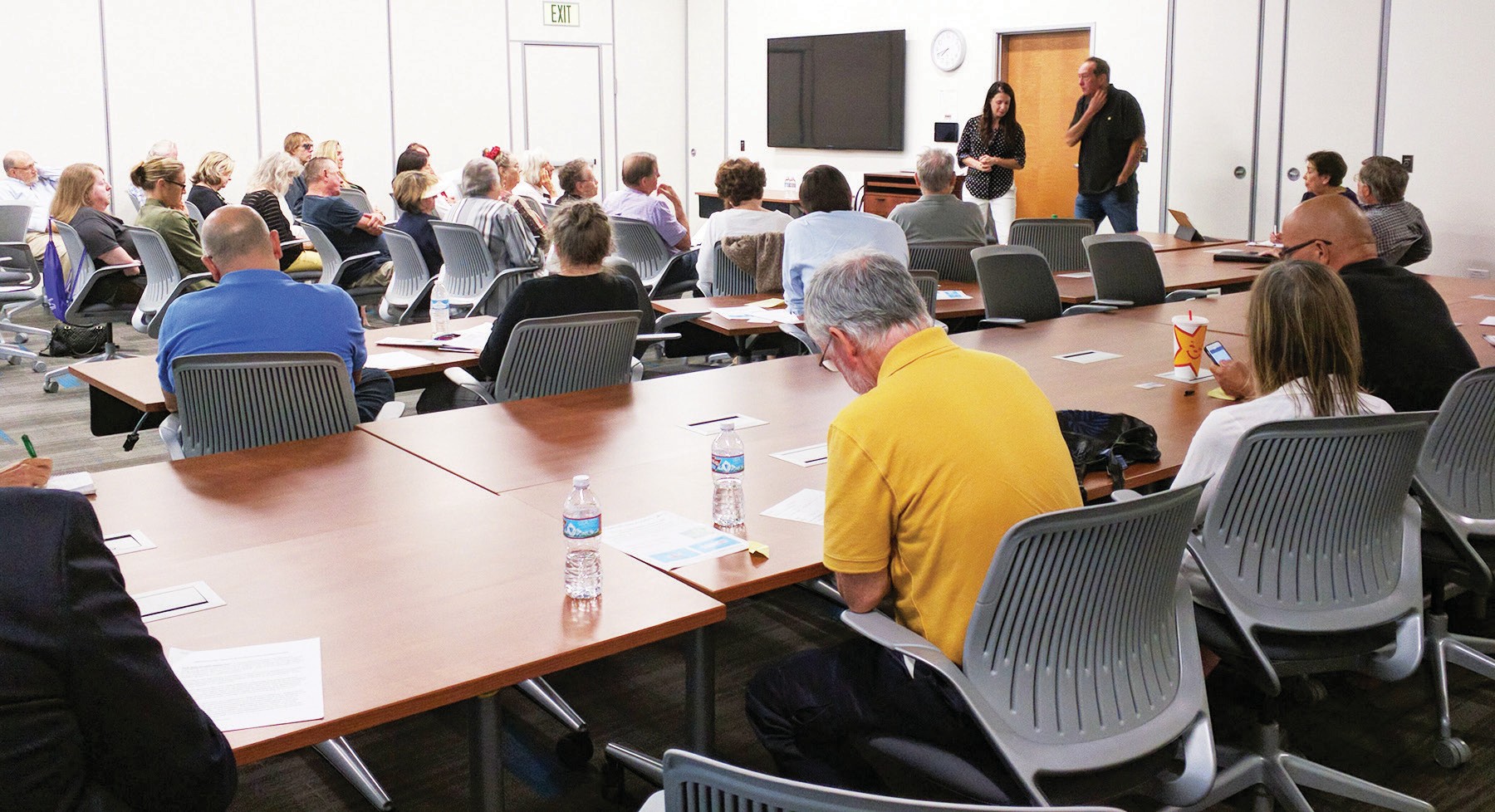 Escondido was the scene June 28th for a forum on Lilac Hills Ranch. See story.

More than 50 residents and several local politicians gathered on Tuesday, June 28, for a County forum hosted by Escondido’s Chamber of Citizens (“ECOC”) (NOT the Chamber of Commerce) on the Lilac Hills Ranch ballot initiative project.

The meeting was held in the main conference center at the County of San Diego’s North Inland Resource Center in Escondido.

Organized by Chris Nava and the ECOC, the forum was designed to provide an opportunity for County residents to learn more about the Lilac Hills Ranch ballot initiative process and its impact on the quality of life in San Diego County. The ECOC is a liberal, grass-roots group formed in 1998.

James Gordon, the featured speaker on behalf of San Diegans Against Li­lac Hills Ranch coalition, painted a picture of how disastrous the Lilac Hills Ranch project would be with its 1,746 dwellings, 200 bed dementia fa­cility as well as 90,000 square feet of commercial buildings on 608 acres of rural countryside.

With the unac­commodating road structure, wildfire risk and increase of traffic the project doesn’t fall into the “ Smart- Growth” area and would re­quire General Plan amendments, he said.

Gordon, a Valley Center resident de­clared, “The loop­holes in the California ballot initiative process allows a deep pocketed devel­oper the chance to bypass all local en­vironmental and safety concerns, using a 600-page document that they wrote to confuse the issues and then use mis­leading and deceptive statements with no recourse. The system is rigged to benefit rich investors and developers to get the entitlements to do what they want to make a profit; without being bothered by the concerns of the public, local elected officials, and existing en­vironmental law. The ballot initiative process takes away all oversight from the County Board of Supervisors as well as all of our local officials.”

Among many other speakers at the meeting were Cori Schumacher and Ashly Mellor. Schumacher, a Carls­bad resident who is running for Carls­bad City Council, talked about how many committed residents of Carlsbad banded together to defeat a similar developer lead ballot initiative in her community. Despite being outspent by 100-1, the Carlsbad residents were able to defeat the imitative, although it was a close run election.

Ashly Mellor, the social media spe­cialist for the San Diegans Against Li­lac Hills Ranch coalition, shared how, over the last 20 days, the San Diegans Against Lilac Hills Ranch social media site has reached over 25,000 County residents, providing a source of infor­mation to help county residents to bet­ter understand the project, to inform them of what this project is and share the story of alleged “deceptions” vot­ers were told to get them to sign a peti­tion in favor of the Lilac Hills Ranch initiative.

Gordon summa­rized the need for all residents of San Diego County “to educate themselves and not allow de­velopers to put their profits over community safety; dis­mantle the County’s Planning Groups and ignore state environmental laws. Legislative action is needed and we need to help educate a strong colla­tion of County residents to educate our elected officials and to encourage them to put a stop to this madness.”

His remarks were received enthu­siastically. Afterwards Gordon com­mented that “the message seemed to really move the group into trying to find their place in helping stop this project, Lilac Hills Ranch, as well as figuring out how to stop future projects alike.

For further information, go to San Diegans Against Lilac Hills Ranch Facebook page, Save Our San Diego Countryside website and on social me­dia at #NoMoreLieLac.

For more information about Lilac Hills Ranch, go to lilachill­sranch.com/