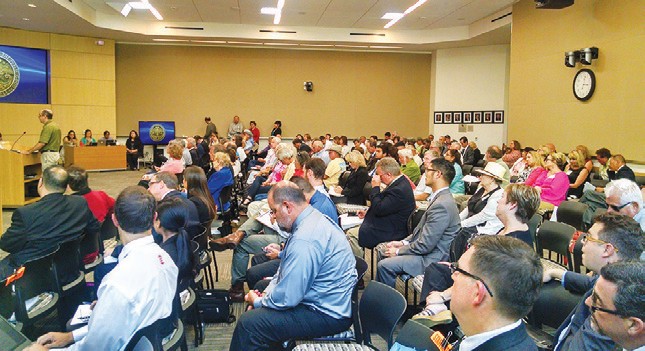 Public comment Friday’s Planning Commission hearing on Accretive Investments’ proposed Lilac Hills Ranch development concluded at 4:53 p.m., so rather than have commissioner discussion and a decision that day the commission’s 7-0 vote closed public testimony and continued the item to an August 12 field trip to the site before a September 11 return to the Planning Commission hearing room at 5520 Overland Avenue.

“It will take some time to vent this out properly. We will do it properly,” said commissioner Michael Seiler.

The final 20 minutes commissioners gave questions to staff for responses by September 11. “I undoubtedly am going to have more questions,” said commissioner Michael Beck.

Accretive Investments seeks a general plan amendment, specific plan, rezone, tentative map, major use permit, and habitat loss plan for 608 acres on the Bonsall/Valley Center/Escondido border. The property is within both the Bonsall and Valley Center community planning areas, in the VC Municipal Water District, and in the Deer Springs Fire Protection District. It borders the VC-Pauma Unified School District and Bonsall Unified School District.

Accretive proposes 1,746 residences consisting of 903 single-family detached homes, 164 single-family attached homes, 211 mixed-use residential units, and 468 age-restricted dwellings within a neighborhood designated for senior citizens. It would include 90,000 square feet of commercial office space, a 50-room country inn, a 200-bed group care facility, a recycling facility, a water reclamation facility, a new fire station if not a remodel of the California Department of Forestry and Fire Protection’s existing Miller Station, a site for a K-8 elementary school, 13.5 acres of public parks, 11.5 acres of private parks, and 104 acres of biological open space.

The proposed general plan amendment would change the land use category from Semi-Rural to Village while revising the Valley Center and Bonsall community plan texts to add the proposed village.

Lilac Hills Ranch would be built in five phases over ten years. About 4 million cubic yards of cut and fill would comprise grading over 504 acres of the project.

The draft Environmental Impact Report included eight project alternatives. The initial draft EIR was circulated for public review in July and August 2013 and a revised EIR was circulated in June and July 2014. The county received 188 comment letters with approximately 3,500 total comments.

“This is a very controversial item,” said PDS director Mark Wardlaw. “Our staff has been very thoughtful of that level of community concern.”

The travel time from the nearest Deer Springs Fire Protection District station to the northern part of the project is seven minutes, which exceeds the general plan’s five-minute standard for village areas. The Valley Center Municipal Water District has noted it will still be able to serve the project even with the April executive order reducing water use throughout the state. The new water reclamation facility will be added if additional capacity is needed after an increase in capacity at the Lower Moosa Water Reclamation Fa- cility.

Accretive sought ten waivers from county road standards, and PDS supported seven. One waiver PDS recommends denying involves the widening and realignment of curves for West Lilac Road. That would require eminent domain, which would take land currently used for agricultural operations but no residences and would also require the realignment of 11 driveways. The Accretive proposal does not require any eminent domain.

PDS staff recommends approval of the project with modifications which include a 50-foot buffer to enhance community character and provide screening (the proposal includes a 12- foot buffer), requiring the town center to be developed prior to or concurrent with the third phase, requiring all development to maintain conformance with the conceptual plan, and requiring an agreement with the North County Transit District for a transit stop on the site and to provide interim service to the nearest NCTD transit station until NCTD serves the property. (NCTD has indicated that the completion of the Palomar College campus in Fallbrook along with the Meadowood, Campus Park, and Campus Park West developments would likely make a north-south route from the Escondido Transit Cen- ter feasible; such a route could include Lilac Hills Ranch.

Two existing NCTD bus routes connect the Escondido Transit Center with Pala Casino; Route 389 has a stop at the park-and-ride by Interstate 15 and State Route 76 which is the nearest stop for the northern part of the Accretive area while Route 388 runs through Valley Center.)

Although the EIR found that some significant impacts could not be mitigated, PDS staff recommended 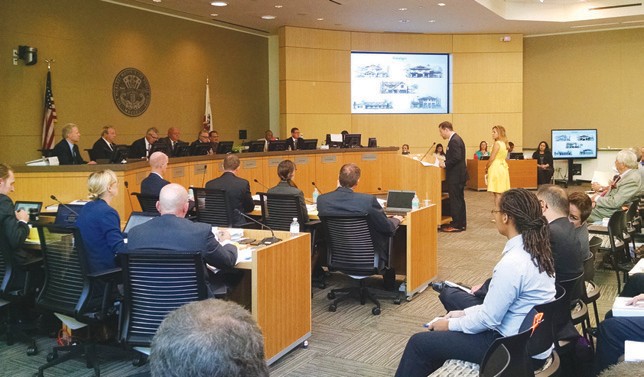 a finding of overriding considerations including the school site, recreational benefits, and low-income and moderate income housing along with the tax revenue and employment economic benefits. Lilac Hills Ranch would provide 375 units considered low-income or moderate-income along with 468 senior housing units.

Accretive filed its initial application for Lilac Hills Ranch in 2009. “We’ve had a top-notch team of planners and designers,” said Accretive CEO Randy Goodson. “We took your concerns to heart and we hope that you find Lilac Hills Ranch has exceeded your expectations.” “One major constant that remains is creating great neighborhoods,” Goodson said. “Community character has always been a fundamental priority for our design.”

“Having mixed-use creates a vibrant community,” said Accretive president Jon Rilling. “The eyes on the street make it a very safe community.” Rilling noted that all of the homes are within a ten-minute walk to one of three neighborhood centers.

“This is a place where neighbors know each other, where you can bike or walk to the town square,” said Accretive assistant project manager Cassandra Costa.

“Our number one planning requirement is safety,” Goodson said.

Hutchison added that the inadequacy of emergency evacuation routes in Valley Center was demonstrated during the 2003 and 2007 wildfires. “In Valley Center we take wildfires personally,” he said.

“This project is plagued with issues,” Hutchison said. “These problems will drastically impact Bonsall and Valley Center.”

“The Lilac Hills project would have a tremendous impact to county roads while leaving the taxpayers to foot the bill,” said Bonsall Sponsor Group secretary Phyllis Carullo-Miller.

The Valley Center-Pauma Unified School District is neutral on the project, although Supt. Mary Gorsuch expressed concerns about its expected additional 650 students from kindergarten through 12th grade. Accretive is only required to pay $3.7 million in developer fees, but the cost to build a new school not including the purchase of land is estimated at $25 million. “This school cannot be built without additional mitigation,” Gorsuch said.

Gorsuch noted that Accretive intends to enter into an agreement to build the school, but the district cannot rely on a verbal assertion alone. Gorsuch also noted that students would face a 45-minute bus ride each way without an on-site K-8 school. The school site is within the district boundary, although an interdistrict transfer is possible.

“If there’s that kind of a commute, they just might do that,” said Bonsall Unified School District superintendent Justin Cunningham. “We would not have a problem working out an agreement with them.” That agreement could possibly include transferring the territory, which is closer to Sullivan Middle School and Bonsall High School than to VC High School.

Cunningham spoke favorably of the project. “These are the only people telling us ‘we will build a school,’ ” he said. “When you have a developer who says ‘we will build a school,’ that’s much more attractive.” The informal communication between Accretive and Cunningham, which could become a condition of approval, indicates that Accretive would donate the land and build the school. “Accretive says they will. They said we’ll build it, a turnkey school,” Cunningham said.

In addition to the loss of farmland, agricultural concerns include urban-agricultural interface issues such as pesticide application and tractor dust and noise. “Growers in the area have major concerns,” said San Diego County Farm Bureau board member Hans Britsch, whose farm is on Lilac Road.

“Former Bonsall Rotary Club presi- dent Jon Frandell noted that the Meadowood, Campus Park, and Campus Park West projects were part of a coordinated plan. “If you’re going to have development it needs to be along the I-15 corridor,” he said. Frandell has a daughter who lives in San Elijo Hills. “The millennials want paths. They want recreation. They work at home,” he said. “The millennials want this kind of lifestyle.”

“Development will happen and needs to happen in a way that benefits the overall community,” said Julie Villelli, who has lived in Fallbrook for 23 years and has three children.