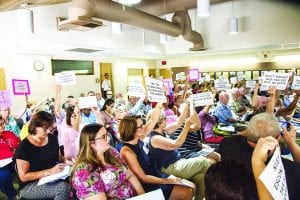 The library hall was filled for the foundation meeting. Normally these meetings are attended by a handful of residents, and often a few of the homeless, as well. Not so, Wednesday’s meeting. Photos by Lenny Kerbs

The Escondido Library Board of Trustees Wednesday voted unanimously to oppose privatization of the facility.

Normally a lightly attended event, the board of trustees meeting was a full house, which the Save Our Library Coalition estimated was more than 150. Many had signs with messages such as “Libraries are sacred,” and “Don’t Export our Tax $$$ Out of State.”  Organizers eventually ran out of badges.

The meeting opened with the board reading from their charter, explaining their responsibilities are.  Essentially, they make recommendations. The city council makes the decisions.

Speakers had a common theme:  if the library is privatized, it will decay until it is only a hangout for the homeless.

Some speakers said they didn’t trust the council majority because of its closing several years ago of the East Valley Branch. This remains an open wound for some.

“If they do this to our current library, why on earth would we support a bond measure for a new library?” said Laura Hunter, organizer of Escondido Indivisible and a Coalition member. 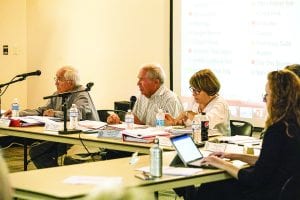 Members of the Library Foundation, who unanimously voted to oppose privatization.

Noting that volunteers play a large part in supporting the library, several speakers said the council might lose hundreds of thousands of dollars if privatization occurs. The city staff’s analysis has said the city could realize a gain of $400,000 a year by contracting with Library Systems and Services (LS&S.) But these speakers said that volunteers would be inclined to abandon a corporate-run facility.

“I find it galling that LS&S has indicated, as written in their budget proposal, that they expect us volunteers to continue to give them the same financial support as we do our beloved public institution,” she said. She quoted other volunteers as saying they wouldn’t likely support a private library.

Another volunteer declared, “Volunteering for free to line the pockets of a corporation is like me going to McDonalds and pushing a broom to sweep up for them. I’m not going to do it!”

The Coalition claims to have collected more than 1,500 signatures on a petition against privatization.

Liz White, a petition volunteer, said, “At first, we spent a lot of time educating people about what it meant. A week later, they were running to the table to sign the petition.” 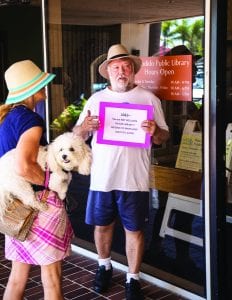 A protester out front of the library Wednesday. Photos by Lenny Kerbs

The city is seeking ways of making up about $20 million that it expects it will have to raise over the next four years due to increases in CalPERS premiums.

McKinney said, “The unfunded pension issue is a real issue and should be addressed with a master plan and timeline.” She added, “I am not in favor of LS&S. The community is the first to suffer so that LS&S gets their profits.”

The Coalition’s main presenter was Whitney McCoy, who spoke on research she conducted on our library, privatization, and LS&S.

“This matters because privatizing a public library is a red flag for a local government that is derelict in its duties to its citizenry. Contracting with LS&S will remove our taxpayer money from the local community and put it in the hands of a private, for-profit, equity firm-controlled company with no obligation for transparency and no incentive for responding to our needs,” McCoy said.

The only council member attending the meeting was Olga Diaz, who told the group that she had not signed the city’s response to the recent Grand Jury report that criticized the city for underserving its library population. 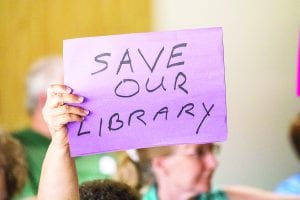 Most of the demonstrators had signs to make their points.

She asked the Library Trustees to “encourage the Council to abandon this idea. I’d love nothing more than to pick up my clipboard and work to get community support for the library bond measure.”

Board of Trustees Chairman Ron Guiles said he was concerned about building support for a new library. “We need a new library and we cannot pass a bond if we have any organized opposition in the community.” He said the overwhelming number of letters and emails received on the subject have opposed outsourcing.

The board’s vote was unanimous.