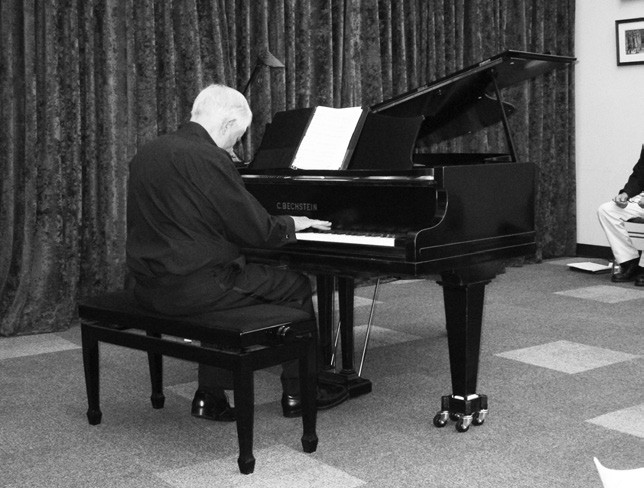 George Vickrey was one of four pianists who helped dedicate the Bechstein Grand Piano at the April 12 concert at the Valley Center Library.

Marian Klein led the 33rd annual meeting of the Friends of the Valley Center Library on April 12 at the library.

In a quickly held business meeting Klein and the other officers of the group were reelected. “It’s good to be the queen!” she quipped, after the show of hands confirmed the slate of officers. They include Vice President Carol Gartner, Treasurer Annie Brown and Secretary Tracy White.

Klein praised Laura Zuckerman, installed last year as VC’s branch manager. “We have a wonderful librarian! Under her leadership the library has become a beehive of activity. Circulation is passing that of all the other libraries. We are really on a roll!” she said.

She introduced librarian Richard Rivera and several bookstore volunteers (there are a total of 24 in all) who keep the bookstore open, even in the evenings. Bookstore sales and membership fees are the sole funding mechanism for the Friends, who provided many of the library amenities that patrons appreciate, such as programs, concerts, purchase of best-selling books, capital equipment and supplies and major projects.

Klein noted that the Friends recently were informed that their grant proposal for installing an audiovisual system at the library has been approved—for $53,000. The installation is expected to happen in September.

Once the business meeting was concluded the auditorium began to fill to capacity as members of the community arrived to hear the dedication concert in honor of the new Bechstein Grand Piano that was recently donated to the library by Julie Watkins. Seats were brought in to accommodate the crowd. About 120 people attended.

They performed a mixture of classical works by composers such as Chopin, Liszt and Beethoven as well as some more modern romantic compositions. The concert took about an hour (but no one was watching the clock!)