Editor’s note:  John Donel is currently one of three senior librarians at the Escondido Public Library. He manages technology and circulation and the other two manage adult and youth services. Together with the deputy librarian, who used to be the principal librarian, they manage the library as a team.

Donel will be the second of two senior librarians to resign in the last four weeks.

His letter, reprinted below, was addressed to Deputy Library Director Joanna Axelrod. 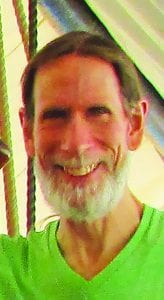 It is with deep regret that I submit my letter of resignation as Senior Librarian from the Escondido Public Library effective December 2, 2017. And while some of you who read this letter do not know me, I send this letter to all concerned citizens, because you need to know of the disregard for honesty and openness in government and the insult to democracy that has occurred in the City of Escondido. The short-sighted, biased, and disrespectful actions of Escondido City officials to privatize the Escondido Public Library by handing over its staffing and management to an irresponsible and unaccountable private company against the advice of Library staff and the desire of the overwhelming majority of Escondido residents leaves me no honorable choice but to resign. As a lifelong public employee who has always worked to meet the needs of the public, I cannot in good conscience continue to work for a city government that has dishonored what it means to be a public servant. While I have enjoyed my two years serving the people of Escondido the unconscionable action of a few self-serving politicians in Escondido government have created a nightmare for the Library and left a stain on our democracy.

Since their establishment nearly 300 years ago, public libraries in the United States have been the embodiment of the Constitutional rights of free speech and open access to information without which no democracy can survive. It is the responsibility of government, not private business, to protect and preserve these basic Constitutional rights. Public libraries and the collections and services they provide which have been established at taxpayer expense, have always been, and should always be, a non-profit government responsibility.

The decision to allow a poor-quality company with non-transparent management and financial practices like Library Systems & Services (LS&S) to make a profit from a free public library has already had a negative impact on Library staff and services as nearly 100 years of professional staff experience have been lost since the “process” of privatization began. The history of LS&S of providing library services “on the cheap” has resulted in their ranking in the lowest 10% of quality measures for public libraries, including professional staffing, circulation and expenditures per capita, according to California Library statistics. Escondido Public Library is currently ranked well above this level. Thus, privatization with LS&S poses a severe threat to quality Library services in Escondido.

However, even worse than the decision to privatize the Library has been the secretive, biased, noninclusive and disingenuous “process” that led to the decision. A “process” which from the very beginning has disrespected principles of public transparency, equal inclusion of key stakeholders, and objective, unbiased analysis of information. Library staff were not given an equal opportunity to be part of the investigative process of LS&S and after becoming aware of the negotiations, were shut out of any genuine opportunity to discuss, question and cross-examine the proposal directly with either City officials or LS&S in a public forum. Library management staff were never given an opportunity to present an alternative budget proposal that could save as much as, or maybe more than, the $400,000 amount that LS&S claims it could save the City annually. A request to develop such an alternative was made by former Library Director Loretta McKinney in April 2017 to the City Manager. Her request was not answered. A possible alternative to privatization drafted by Library staff in September 2017 which proposed a reduction in the number of Library benefitted staff that would have resulted in annual savings comparable to the LS&S projected savings, was also never considered by City officials.

On the other hand, LS&S was allowed to privately communicate with City officials throughout the entire “process”. LS&S also secretly investigated the Library and presented a biased report to City officials with no opportunity given to Library staff to rebut their unsupported claims. The City provided vague and unsubstantiated information in support of Library “outsourcing”, as they called it, which came exclusively from LS&S employees and customers. Information critical of LS&S was generally excluded from official City statements and the City website. Information in support of LS&S was generally placed on the City website in its entirety with no vetting for accuracy or opportunity for rebuttal by Library management staff or citizens. City officials were allowed to speak in favor of “outsourcing” at any time, to anyone and to publish any information that supported the proposal on the City website. Conversely, Library staff, who are the most knowledgeable on library issues, had to be silent about the issue during work hours and could only speak against Library privatization on their own personal time.

Indeed, as a professional research librarian for 28 years it has been embarrassing and frustrating to watch how the very few who support privatization have consistently presented biased, inaccurate and/or one sided information while at the same time dismissing or ignoring the volumes of documented facts and statistics against privatizing the Library presented by professional librarians, three former City Library directors, independent outside organizations such as the American Library Association, and the City’s own Library Board of Trustees.

On August 8, 2017, the Library Board of Trustees voted unanimously to oppose “outsourcing” of the Escondido Public Library. Their vote was ignored by City officials. At their September 26, 2017 meeting the Library Board of Trustees requested a delay in any “outsourcing” decision until investigations could be completed into a possible move of the Escondido Public Library into the San Diego County Library system. They also asked for time to investigate if the Board could take over Library management pursuant to California Education Code Section 18910, which states: “The public library shall be managed by a board of library trustees, consisting of five members, to be appointed by the mayor, president of the board of trustees, or other executive head of the municipality.” Based on this it was the Board’s contention that they should have the primary right to decide who manages the Library. Both of these very reasonable requests simply for more time to investigate alternatives to privatizing the Library were not even considered by Escondido City government officials.

Indeed, the City’s “process” provided no objective, justifiable answers to many questions. For instance, why was there such a rush to judgment in this “process”? Why were key stakeholders (Library staff, the Board of Trustees and the public) not involved in the “process” from the very beginning? Why was the Library, whose staffing budget represents less than 3% of the City’s general fund, singled out to deal with the City’s unfunded CalPERS liabilities? What was happening behind the scenes that caused such an important issue as control of the City’s public library to be decided in just two city council meetings less than two months apart? Why were Library staff not asked to submit an alternative proposal? Why was an unprecedented ten-year contract signed with LS&S?

As a Library staff member, it has been difficult to watch the negative effect on staff morale this “process” has had as Library staff have been dismissed, disrespected, insulted and discouraged from speaking out. That disrespect which led to the early retirement of former Library Director Loretta McKinney and the placement of former Deputy Director Cynthia Smith on administrative leave, both in less than a two-month period, and both for their persistent criticism and questioning of the City proposal to privatize the Library, shows the sacrifice made by some to speak out against this “process”.

And most sadly, as a citizen of Escondido it has been extremely disappointing and disillusioning to see how a few uninformed politicians in City government have disrespected democratic principles and disenfranchised the people of Escondido by advocating and adopting a proposal that no one outside of City Hall supports in a “process” that was a rushed, disingenuous charade from the very beginning. The final City Council vote to privatize the Library was disrespectful of the opinions and views of thousands of Escondido residents, who signed petitions, wrote letters to City officials and spoke in meetings and online forums. Hundreds of citizens made individual statements at City Council and Library Board of Trustees meetings, yet their pleas have been completely ignored by City officials. And to date those officials have provided absolutely no data to suggest that privatization of the Library is supported by anyone outside of City government.

Yes indeed, the entire privatization “process” was a travesty and an insult to open minded and unbiased investigation, inclusiveness of all concerned stakeholders, and showed total disregard for the will of the people and the principles of an open and democratic society. The opinions of experts and the voice of the overwhelming majority of citizens were ignored. It is this kind of closed minded decision making by a small minority in government that creates feelings of frustration, disenfranchisement and cynicism in the people and causes even deeper divisions in a society that is already too divided. Political officials need to remember that they work for the people and not for themselves.

I do thank councilperson Olga Diaz for her courageous and steadfast opposition to privatizing the Library. She has been the lone shining beacon of democracy in Escondido city government who understands the needs of the economically disadvantaged, minorities and less privileged who most need the resources of a public library. Indeed, she truly understands the mission of public libraries in a democratic society and the importance of libraries being managed and staffed by public employees who are pledged to transparency, accountability and public service.

Fortunately, our democracy is strong and as it has many times before, will survive the narrow minded decisions of uncaring politicians. To those who voted to privatize the Library, shame on you for dishonoring the will of the people, our Constitution and our democracy. To those who oppose privatizing the Library, take comfort in knowing that you have supported the Library and its staff during a time of great stress. Your opposition to a dictatorial government action has supported the best of democratic ideals and principles and affirmed that this is indeed a government of the people, by the people and for the people.

Finally, I invite all citizens concerned with propriety, fairness, inclusiveness and transparency in government action who read this letter to learn more about the injustice that has occurred against the citizens of Escondido. I hope everyone will see it as part of your civic duty to ensure that this never happens again and that such wrongs against democracy, wherever they occur must be opposed or else democracy anywhere is not safe.

13 responses to “Librarian submits resignation: A Librarian’s resignation letter and plea for justice”