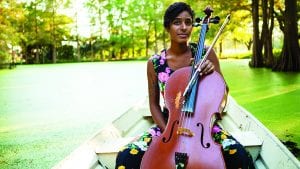 Leyla McCalla takes over downtown Escondido’s Center Theater at the California Center for the Arts, Escondido in support of her new critically acclaimed album “A Day for the Hunter, A Day for the Prey.”  The concert will be Sunday, October 1, at 7:30 p.m.

McCalla is a former member of the Grammy-winning Carolina Chocolate Drops, a renowned cellist and moving performer whose poetic lyrics are only matched by her elegant compositions.

NPR hails McCalla as a “virtuoso”, and The Guardian calls her latest album “powerful”, while PopMatters gives her the title of an “innovator” that can “transport those who listen intently to another place and another time.”

Whether McCalla is singing in English or singing in French, playing the cello or playing the banjo, creating new Creole jazz standards or plucking classical strings, the one thing she always does is inspire. Born in New York then taking up roots in Louisiana, where she still resides, Leyla has always stayed close to her Haitian heritage, while seamlessly connecting it to the vibrant culture that surrounds her.