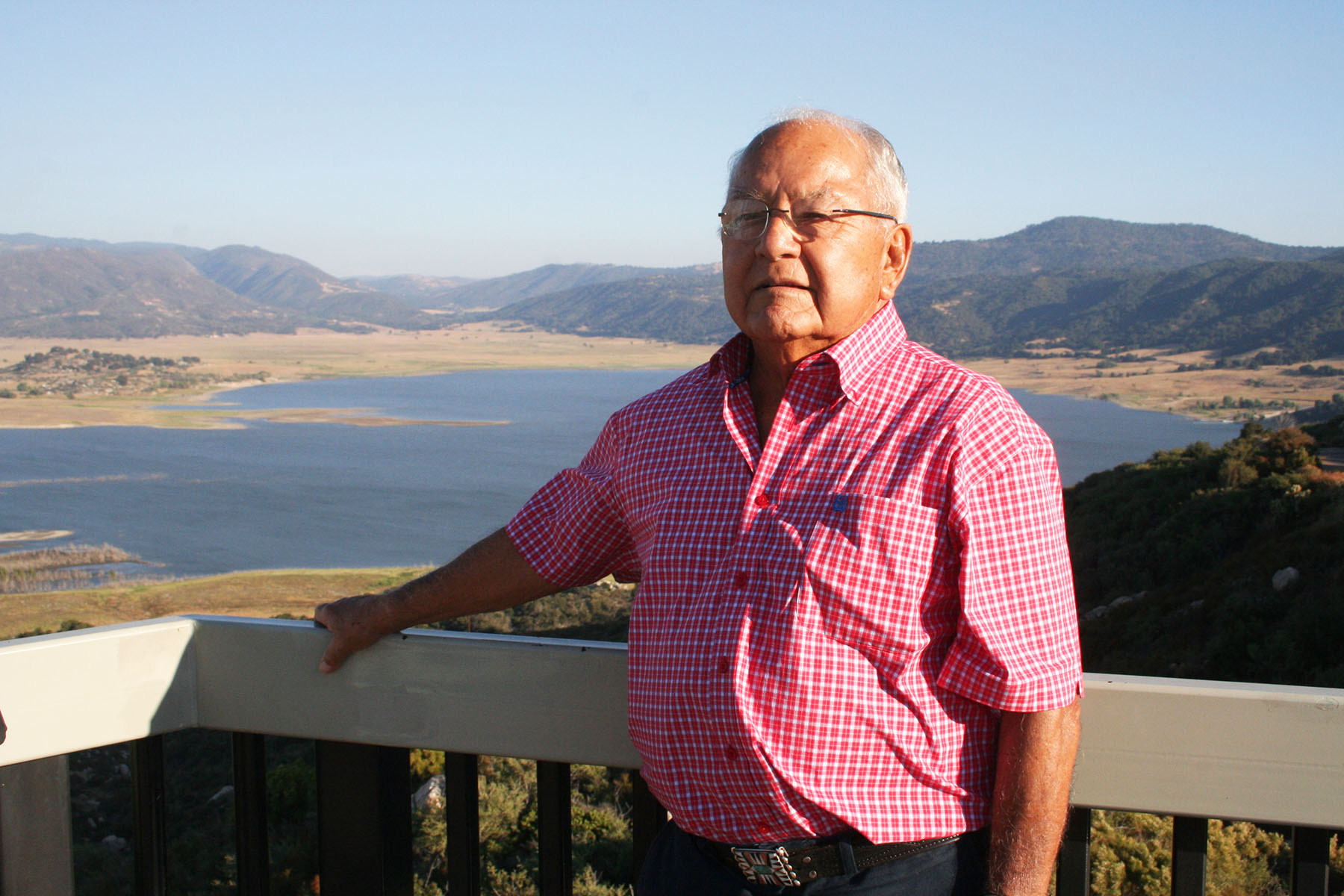 Leo Calac has been named one of nine 2019 Escondido Forever Legends by the Escondido History Center. Here he is shown with Lake Henshaw in the background.

Leo Calac has been selected as one of nine 2019 Escondido Forever Legends by the Escondido History Center.  A Senior from a High School in Escondido will receive the FLAG (Future Legends Award Group) Award in his name and be presented a $1,000 honorarium. This award, presented in an October 9, 2019 ceremony, is made possible by the generous sponsorship of the Rincon Band of the Luiseño Indians.

Leo Calac was born in Riverside, California in 1920. The family moved to Escondido in 1922 where he attended Escondido Grammar School (now Central School) and Escondido High School, graduating in 1938.  Leo played Football and, most notably, Baseball where he earned four Varsity letters.

The baseball team was the Metro League Champion for three consecutive years and in Leo’s senior year, their only loss was to Long Beach Poly in the Southern California Championship game.  During his High School Baseball career Leo played against Ted Williams (Hoover High) and Jackie Robinson (Muir Tech High).  Starting in 8th grade, Leo (2nd base) played softball for 30 years with his brothers Don (pitcher), Delisle (3rd base) and his father “Sat” Calac (catcher.)  Gordon, Leo’s son, was the batboy.  The team name was Dunamis and they were in the City’s Church League representing Emmanuel Faith Community Church at Finney Field, often in front of 800-900 fans from town.

Leo Calac had many important and successful roles in his life.  After high school, Leo attended Southwestern University, graduating in 1941 with a bachelor’s degree in accounting.  Drafted by the Army in 1942, he was stationed at Camp White, achieving the rank of master sergeant, where he met his wife, Monte, a WAC sergeant.  They were married in March, 1946 in Escondido where Leo had returned, working as an accountant. They had two children, Gordon and Mavany. Leo Calac was a charter member of Emmanuel Faith Community Church, served on the board as treasurer for 15 years and served as the choir director for 28 years.

In 1952 the Escondido Union High School District selected Leo as their first business manager.  He served in that capacity until 1975.  Monte and Leo opened The Indian Shop in 1964 in the old Escondido Village Mall and in Palm Springs in 1970.  In 1971 he was named the California Indian Small Businessman of the Year.

An important member of the Rincon Band of Luiseño Indians, Leo Calac was on the Rincon Tribal Council for nine years, serving as chairman for four years.  He has also promoted the Native America culture by serving on the California Advisory Commission on Indian Affairs, Indian Arts and Crafts Board appointed by the Secretary of Interior, charter member and president of the Indian Arts and Crafts Association and served as treasurer of the San Luis Rey Indian Water Authority.

Leo Calac has been a leader in every phase of his life, a role model for all of us and is a 2019 Escondido Forever Legend.