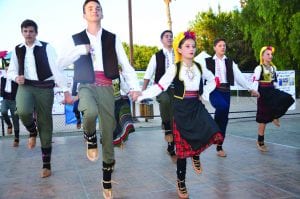 Serbian dance will be one of the many cultural elements on display at Serb Fest.

You’ve seen the beautiful church from Nordahl Road, on the edge between San Marcos and Escondido, and maybe thought of taking a closer look at the architecture and—or wondered about the Serbian culture.

On the weekend of September 16-17, listen to your curiosity and stop by for the 6th annual Serb Fest at St. Petka’s Serbian Orthodox Church, which will happen both Saturday and Sunday afternoons, with Serbian food, drink, culture, song and dance, and several tours of the beautiful interior.

About 2,500 visitors are expected to attend the popular event over the weekend.

Cost for adults is $3, with children, active military and first responders attending free. The times are Saturday, noon – 10 p.m. and Sunday, noon–8 p.m.

The theme of Serb Fest is “Discover Serbia” through food and culture, including drinks and vendor booths, which will offer books, religious items and Serbian toys. There will also booths of local businesses. The exhibit “Discover Serbia” will be in the main hall.

Special this year: the Kosovo Men’s Choir from Ohio will perform both days and will sing the liturgy during the Sunday service. Music for Orthodox services is provided by the human voice alone, with no other instruments.

That doesn’t mean that there won’t be instrumental music outside of the church after the service. Musicians will be here from Chicago and Houston to play traditional songs.

The Puerto Rican musician Samira Parilla, who has a love of Serbian music, will be a special guest of the festival and will sing several songs. 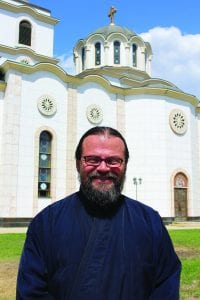 Serbian cuisine is savory and delicious with the main meat ingredient being lamb and beef. One such item is cevap, a grilled dish of minced meat, a type of skinless sausage, found traditionally in the countries of southeastern Europe (the Balkans).

Beside the popular Serbian cevap plate, there will also be chicken skewers, Serbian Grilled Sausage, Sarma (stuffed cabbage), Burek (made from layers of dough, alternating with layers of other fillings in a circular pan filled with cheese) and pork and lamb off the spit.

The sausage is made by church member and Escondido resident Basko Kresovic.

Desserts include Baklava, Tulumba (about 3 centimeters long) given a small ovoid shape with ridges along it using an “icing” bag with a special nozzle. It is first deep-fried to golden color and then sugar-sweet syrup is poured over it when still hot. It is eaten cold.  Other desserts are Krempita (custard creme cake) and Palacinke (crepes.)

St. Petka’s was built in 1987 and today serves about 250 families. St. Petka is a Serbian saint who was a hermit who sold all of her possessions and lived a quiet, isolated, contemplative life. When she returned home town to die, her body was credited with miraculous healing. “Today she is the second most popular woman saint next to Mary,” says Father Milovan Katanic, who came to the church in September of 2015.  He was born in Serbia but raised in Akron, Ohio.

“We are working to make sure there is something going on all the time during both days,” he told The Times-Advocate. He will lead the tours of the church on both days. The other activities will take place under a large tent.

Father Milovan, Chairman Alex Skrbic and members of the Serb Fest committee having been working on plans for the event since early summer. 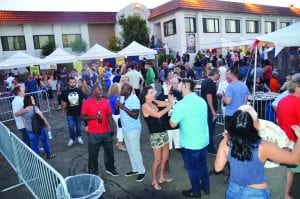 “This year it’s not just tasting but hearing, discovering our culture through the food and drink and our Orthodox faith,” said Father Milovan. “It’s an opportunity for us to open our doors. Lots of people have driven by and seen the church and we want to show it to them. We open our doors for two days and have a fun weekend promoting our culture.”

Serbia has a rich history. It has been a kingdom, an empire, part of the Austro-Hungarian Empire, part of Communist Yugoslavia and now a republic. “The one thing that has united us has been our church,” he said. “That’s why when Serbs come to America the first thing they do is organize their church.”

The festival is something of a fund-raiser for the church, but it is more than that. “If it was just a fund-raiser we wouldn’t go all out,” said Father Milovan.

The church is located at 1854 Knob Hill Rd. San Marcos.