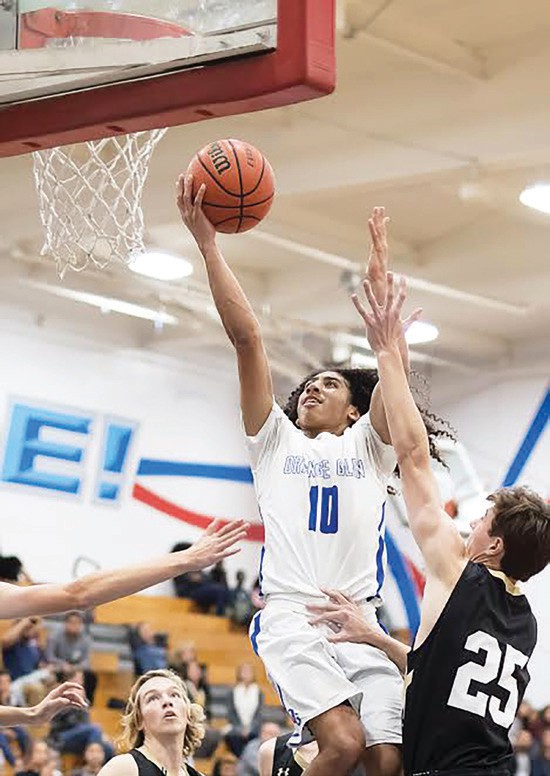 Early in the fourth period of Orange Glen’s recent home contest against Sage Creek, the Patriots were up 48-38 and seemed to have things reasonably in hand.

But give the visiting Bobcats credit. Throughout the game, no matter what the circumstance or the score, they continued to soldier on and brought persistent effort. And that perseverance was eventually rewarded.

SC was about to make a strong push to pull off an upset and steal a victory from the Pats that at one time appeared all but assured for the hosts. After lanky forward Bryce Buscher scored on a conventional 3-point play and then muscled up a bucket from in deep, the Bobcats were clawing their way back at 56-52.

A missed layup by the Pats continued to open the door and SC made them pay when Teiyler Scott drained two clutch free throws of his own. Suddenly, the OG fans in the stands were beginning to squirm in their seats and things became even more unnerving when the speedy Damian Miller, who would top the Pats in scoring with 15 points while aggressively attacking the rim, missed on a one-and-one chance from the line.

Finally given an opportunity to seize their first lead of the game, the ‘Cats didn’t falter as Scott camped out in the left corner and after receiving a spot-on pass, he proceeded to drill a perfect swish that stunned those in attendance. Now the count was 57-56 in favor of Sage Creek and a startling result/reversal seemed in the offing.

But a tip of the hat must go to the Patriots as they showed no signs of panic. Eschewing a timeout, OG hurriedly but under control brought the ball into the front court with smooth guard Michael Diaz in possession. Diaz dribbled assertively to the foul line and then demonstrating good vision, he delivered a superb 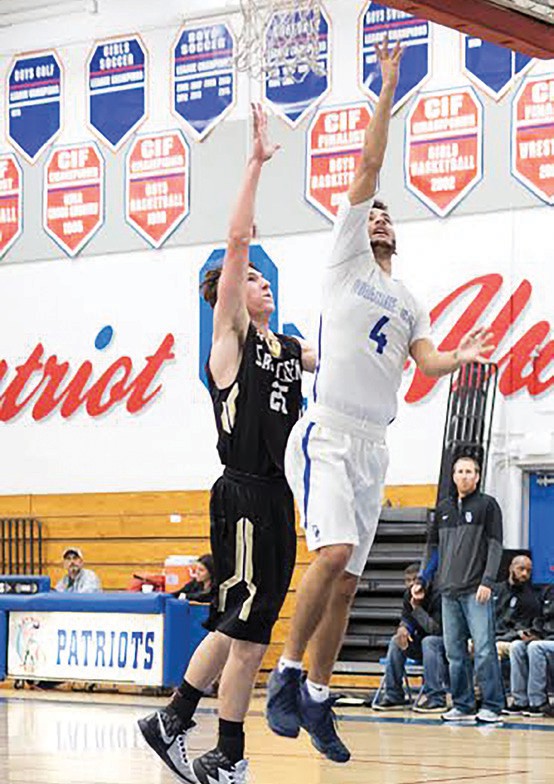 Trevor Owens finds room inside and puts up the decisive bucket in OG’s 58-57 win over Sage Creek.

bounce pass to Trevor Owens who was open underneath. Well positioned, Owens made no mistake as he neatly kissed the ball off the glass for the decisive layup that put OG up 58-57 with just 6.1 seconds remaining.

The Bobcats tried to regroup with a timeout but their last shot at victory evaporated when the OG defense forced a turnover as time expired. The Pats had come mighty close to letting this one slip away but their faultless execution when it mattered most had saved them.

With the win, the Pats improved their overall mark to 8-4 and snapped a three-game losing streak. This is a talented and athletic group with high expectations so that recent lull was wearing on the minds of the players. But it’s not like OG fell to teams of no consequence. Alemany, Saddleback Valley Christian, Rancho Bernardo and Mission Hills have an impressive combined record of 45-13. That isn’t exactly chopped liver and so coming up short to foes of that caliber is hardly cause for discouragement.

Nonetheless, it was a high priority for the Pats to get things back on track and create a more positive vibe moving forward. As such, a win over Sage Creek was very much needed.

A late spurt of seven unanswered points staked the Pats to a 20-13 at the end of the first period. A nifty shot by Miller in which he delayed his release and then drew a foul at the buzzer highlighted this run.

The Bobcats were able to close the gap to 33-30 at the half as they got scoring from seven different players in the quarter number two. But thanks to Owens, who knocked down a pair from the charity stripe before nailing a corner 3, OG was able to preserve at least a portion of its advantage.

Coming out of intermission after having sat 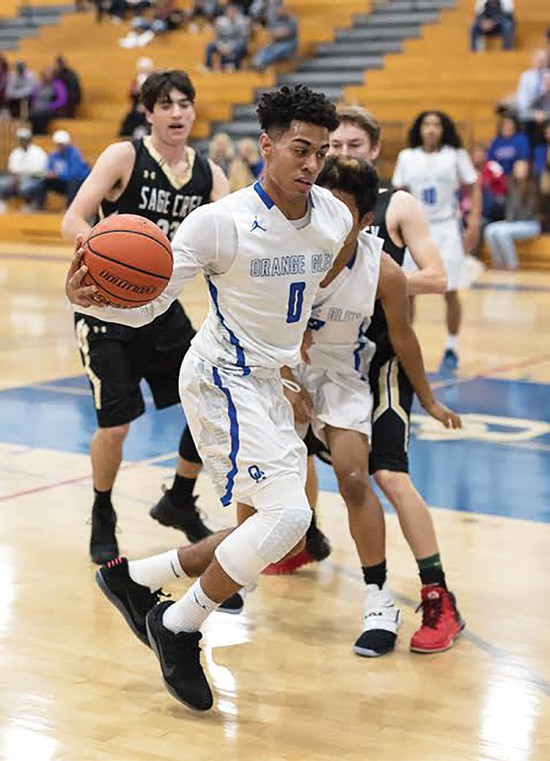 The versatile Michael Diaz keyed a third quarter surge by the Pats. Photos by Lenny Kerbs

out the second stanza, it was the fluid Diaz who ignited his club. First, he popped home a sweet jumper from inside the lane. Next, he deftly maneuvered to the top of the key, elevated and then let fly, hitting nothing but net. From there, it was Miller who the grabbed torch and took over. Four times he dribbled with aggression and purpose to the hoop. He was simply a penetrator who wouldn’t be denied. The end result was four converted free throws, a sky high layup and a pretty scoop with the left hand. With Diaz and Miller exerting their presence, the Pats had padded their margin to 47-38 entering the final eight minutes.

Which led to the climatic final period in which Sage Creek gallantly rallied only to have OG pull it out when it made the defining play with the game on the line.

Not surprisingly, it was OG’s top three scoring threats who generated most of the offense for the victors with Miller hitting for 15, Owens netting 14 while Diaz pitched in with 12. For the game Bobcats, it was Scott who led the way with 13 points while Buscher also reached double figures with 12.

With Coastal League play, featuring accomplished teams like Foothills Christian, Francis Parker and Santa Fe Christian, just around the corner, the Pats will have to be at their best to be viable contenders. But Coach Chris Featherly’s team has the wherewithal and talent to make a legitimate run at a title.

The Patriots are a club that possesses plenty of assets. Well-conditioned and willing to hustle, they can press effectively and are quite active on defense. With a rotation that can go eight, nine or perhaps even ten deep, Featherly can keep his charges relatively fresh by sending waves of personnel at the opposition.

OG is also a team that 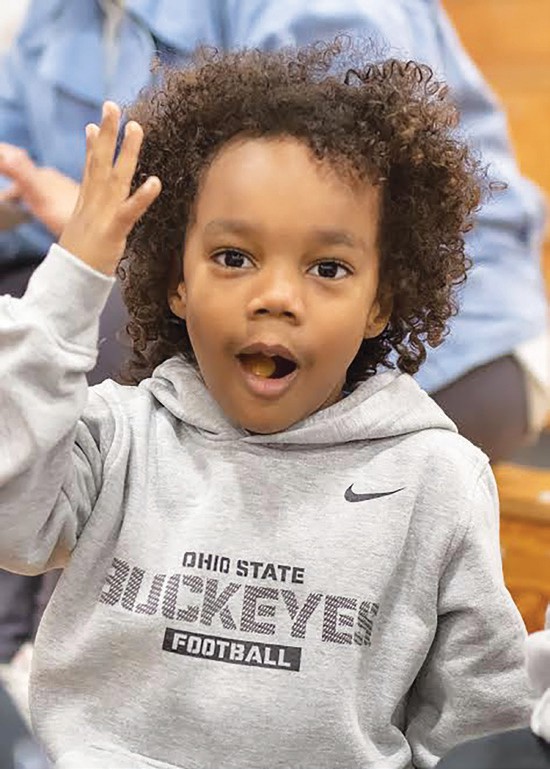 Young Daraji Copeland was one of OG’s most animated fans.

can crash the boards and has the athleticism to get out in transition and make the most of its fast-break opportunities.

Moreover, the Pats have some dynamic individuals on whom to rely. Miller is an exciting and fearless hoopster who has a great handle and can break down a defense. And when he gets a step, Damian can take it to the rack in quicksilver fashion. In addition, this junior is a splendid rebounder for his size.

Meanwhile, Owens is a dangerous scorer with good range who is capable of putting up points from any number of spots on the court.

In low, Nikola Kresovich has the type of strength that allows him to establish position to either score from in tight or grab his share of caroms. Kresovich gives OG a big body presence that it must have in order to prevent foes from dominating underneath.

And last, but in no way least, there’s M. Diaz. A singular talent, this senior is the complete package. Able to create his own shot, he’s can pull up and pop or glide effortlessly to rim. Equipped with a good motor, Diaz fights hard for rebounds, can penetrate, is a sweet passer and on the defensive end, he’s willing to get after it. He’s simply a beautiful player to watch. If he does have a shortcoming, it may be that on occasion, Diaz tries to do too much and as a result, he might force the issue. But you’ll live with that because this young man is a special breed who has difference maker written all over him.

Yeah, it was uncomfortably close but the win over Sage Creek was one that OG had to have. It should provide that Pats with a bit of a boost that just might kickstart them towards bigger and better things as the season hits the midway mark and continues to unfold.