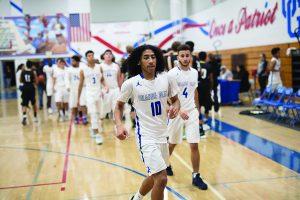 Can Damian Miller help lead his team to an upset over Capo in the State tourney?

After gallantly storming back from a 13-point fourth-quarter deficit during Saturday’s San Diego Section Division II Boys Basketball Championship, the Orange Glen Patriots were on the verge of pulling off one of the more memorable comebacks in local CIF history.

Down by a count of 40-27 early in the last period to Helix High and seemingly just about to go under, the Pats showed their tremendous moxie by putting together a spirited 17-6 run that brought them to within two with approximately six seconds remaining.

Even better news was the fact that a shot had just been released by the sizzling Nikola Kresovich, who let fly from beyond the arc. Kresovich had already swished home a pair of 3-pointers during the furious Pat rally and everyone at USD’s Jenny Craig Pavilion knew that the senior forward was really feeling it, with a great rhythm to his stroke. A trifecta here and the Pats would have astonishingly taken the lead and probably emerged victorious.

And for the briefest of moments, it did appear as if the Pats were about to steal this one had Kresovich’s attempt reached its intended target. But alas, it never got there. Reacting quickly and closing out fast on Kresovich was the Highlanders’ 6-foot-9 Miles Norris, who reached with an extended left hand to get a huge piece of the ball. Significantly deflected, the rock fell well short and Helix’s point guard Amari Green was right there to grab it before he was immediately fouled. And basically that’s where the drama ended although Green did tack on a couple of late free throws that brought the final count to a rather low scoring 48-44. 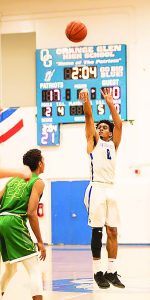 With the hard-fought win, the third-seeded Highlanders captured their 18th straight game, ran their overall mark to a remarkable 27-5 and most importantly, took home a coveted CIF title.

For the Patriots, who came into the postseason as a four seed, the disappointing loss leaves them with a seasonal ledger of 21-9 that features impressive playoff blowouts of Oceanside and Patrick Henry as well as a signature conquest of Canyon Crest Academy, the County’s top-seeded team Division II squad.

With both teams perhaps a bit tentative at the start, the first quarter produced little offense and ended with a slight Orange Glen advantage at 8-4. But then Helix seized the tempo and clearly took over, outscoring the Pats by a 19-5 margin in the second period. Power forward Jaylen Arnold, who would eventually finish as the game’s top scorer with 16 points, was the Scottie doing most of the damage during this pivotal spurt, tallying three hoops and converting four attempts from the charity stripe.

Down by ten at halftime, the Pats weren’t able to put much of a dent in the Helix lead because senior Dylan Lee suddenly came to life. After going scoreless throughout the first 16 minutes, the Highlander sharpshooter got locked in, burying three straight treys to go along with a conventional bucket.  Thanks in large part to Lee’s deadly assault from downtown, the Scotties still had a sizeable 36-27 cushion entering what would prove to be an eventual final quarter. 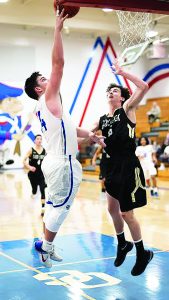 Forward Nikola Kresovich has been on a scoring tear in recent games.

And when the Highlanders scored the first four points of the last stanza, OG found itself in some serious trouble. But instead of becoming discouraged and disheartened, the Pats dug deep and roused themselves. Caedon Palmer got things headed in the right direction with a free throw. Then, guards Michael Diaz and Damian Miller each delivered a basket. After a Kresovich charity toss, it was the other Diaz, Devin, muscling up a shot and putting two more on the board.

That seemed to act as a cue for Kresovich to then occupy center stage. First, he drilled a straightaway 3-pointer. Shortly thereafter, Nik confidently rose up and knocked down another trey, this one coming from the right forecourt. And just like that, the Pats had closed with a rush to get within one at 45-44. Lee would get a point back for Henry via a free throw which served as the prelude to Kresovich’s last ditch try that the lengthy Norris would tip and alter.

In addition to the 16 points that Arnold rung up, the Scotties were also the beneficiaries of productive outings from both Lee and Norris, who registered 15 and 12 points respectively. Moreover, Norris was a tremendous force down in low, swatting away shots while controlling the boards en route to grabbing 14 rebounds.

Though Kresovich was the lone Pat to score in double figures with 12, OG did get solid offensive contributions from M. Diaz (8 pts.), Miller (8), Doup Chuol (7) and Palmer (7).

When OG looks back on this near miss, it will be hard to fault its defensive effort which was solid and persistent. Active with their hands and oft times applying effective pressure, the Pats forced Helix into a hefty total of 24 turnovers. 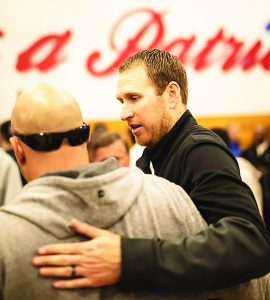 Fortunately, the season isn’t over for this talented and exciting Patriot contingent. There’s still another opportunity to hoop it up. By virtue of its splendid work during both the regular campaign and postseason, Coach Chris Featherly’s team deservedly earned a berth into the Division III CIF State Basketball Championships.

Not surprisingly, the Pats (No. 14 seed) will face an enormous Wednesday night challenge in that tournament when they confront a terrific Capistrano Valley unit that has won 25 games and comes in as third seed.

But big names and stern tests do not intimidate these Pats because they know full well that if they’re hitting on all cylinders, they can best just about anybody. Their belief and confidence is such that they simply won’t ever back down.

It’s just too bad that Kresovich’s potential game-winner just didn’t have quite enough clearance to get over the stretch of the lengthy Norris. Had it, OG very well might have entered State with the very real momentum that goes along with being a champ!