Last debate gets lively as mayoral candidates take off the gloves 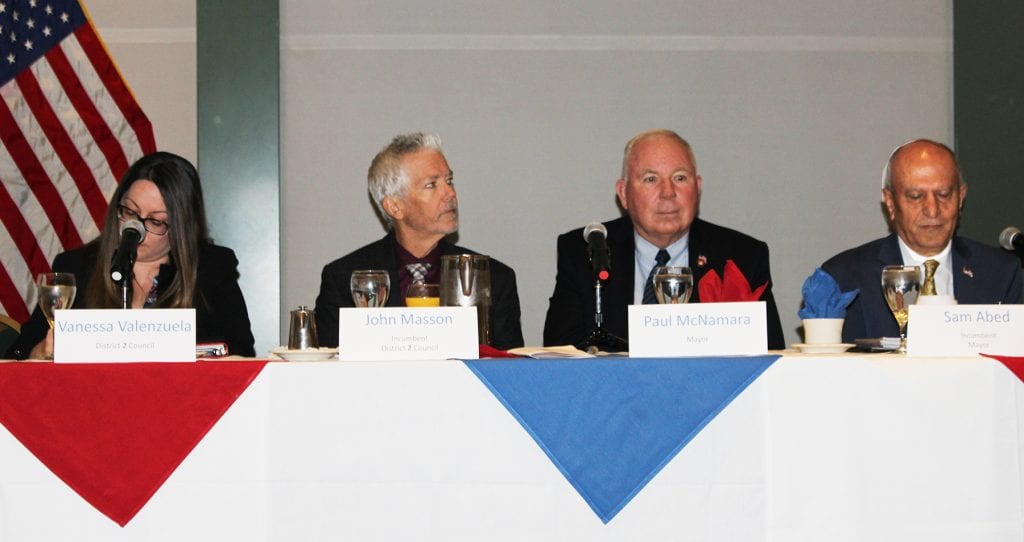 Some of the candidates at the debate, including (from left) Vanessa Valenzuela, John Masson, Paul McNamara and Sam Abed.

Is the city of Escondido poised on the edge of the Slough of Despond or “already arrived” in terms of America’s finest city (with apologies to that “other” city)? Depends on which candidate for mayor you ask.

Last week Mayoral candidate Paul McNamara stressed the “Escondido has problems” side of the equation while Mayor Sam Abed hove to the “the city is in great shape” line of the argument.

Both candidates for mayor, although sitting next to each other, came out of their corners swinging during the last of the city election debates, October 16 at the California Center for the Arts, Escondido, in the conference center. It was a little like attending a debate with Donald Trump on the ballot.

The city council candidates were somewhat more sedate but there was plenty of disagreement. One thing that they could all agree on, however, was when they were asked their favorite place in Escondido. Being politicians, they all named about twenty places each as their “favorite.”  John Masson got the biggest laugh when he quipped: “Pounders.”

Most candidates were also big on how “everybody needs to get along,” “we need to consult more with the voters.” “Listening tours” were also popular.

This debate was hosted by the Escondido Chamber of Commerce, and so the theme was business, and how the city treats business and attracts business. The moderator was Alex Presha, a reporter and host for NBC 7 San Diego. He is a reporter who primarily covers politics and a veteran of moderating debates of this kind.

Each candidate was given two minutes to introduce themselves. Then they were given a series of business-centric questions. The order of responses was changed up, so the same people weren’t answering questions in the same order.

Ed Gallo talked about how he came to Escondido in 1923 and got involved with the local government in 1990 and was first elected to the city council in 2000. He left the council for two years and then returned in 2010. He is running for a third term. “One of the things I’m most proud of is turning the California Center for the Arts from a negative to a positive,” he said. “Since Jerry Van Leeuwen took over, this place is operating in the black.”

His opponent, Consuelo Martinez, has had a career of serving people since she was 15. She began working at age 16 as a bank teller and has worked for various non-profits. She joined the ACLU in 2012. She is an advocate of city engagement. “I’m positive about the city. I want to see everyone involved in the city.”

Mayor Sam Abed said, “I’ve been engaged with the city for nearly thirty years. I came to this city as a first-time immigrant.” Since he became mayor that “Escondido is a safer and better city. We have reduced crime and balanced the budget without dipping into the reserves. We have achieved an A minus bond rating, which means that when we borrow money we don’t have to pay as much in interest.”

Challenger Paul McNamara said, “The city is in decline and our sense of community has been replaced. But the biggest problem is that our city is for sale.” He said the city’s upper limit on campaign contributions: $4,500, is the largest in the county. “We hear claims about the thousands of new businesses, but the mayor is talking about businesses that sell at street fairs. We are not moving in the right direction.”

John Masson of District 2 said, “I’m a small business owner who has provided twenty-eight jobs to this city. I’m proud of our accomplishments, including $17 million spent on roads.”

Masson’s challenger Vanessa Valenzuela is a professional controller. She has worked on the finances of organizations like the Rancho Santa Fe Assn. or country clubs “that function very much like a city.”  She said, “I’m running for District 2 because I’ve grown up here. I’ve watched the city deteriorate over the last sixteen years, including cutting services. I was shocked when I found out about the East Valley Library closing.”

Candidates were asked  their top priority if elected.

Valenzuela said her first priority would be to bring back the city council’s budget committee. “It is typical for a municipality to have a budget committee,” she said. “We need to take a hard look at what we are spending our money on.”

Gallo said he would “continue what we are going. He touted the 45 LED street lights that have been installed in his district. Some of those neighborhoods were down to one light per block. Hickory Street had no lights at all between Washington and Mission. If reelected, he said, he would continue this process into other neighborhoods.

Martinez said “I would do a listening tour and find out what the most pressing need is in each neighborhood—and create a list. I’m taking notes. I want to make sure that street lights don’t take seven years to get up.”

Abed said, “I will continue to focus on economic issues, safety and housing affordability and addressing the homeless issue. If we don’t build enough homes the poor will be the hardest hit. We are going to build two thousand units in the downtown that will add to affordability.”

McNamara said, “When you knock on a lot of doors, you get a lot of feedback.  The first thing I would do is start that dialogue to get that feedback. We need to get our businesses back on track. Not just build homes.”

Masson would continue the existing policies and focus on public safety and addressing problems such as graffiti. “I’d like to see more parks, such as skate parks. We’ve neglected our parks I the last five to ten years.” He said he would expand the program of synchronizing signal lights.”

Asked to name the greatest challenge facing small business, Valenzuela said, “Regulations are difficult” She knows businesses that had a hard time starting up because of them. Other challenges to business are parking and the homeless, she said.

Gallo said “Last year we went on a business visit. The biggest thing we were told is the homeless problem. The other thing we heard was the need to help startups. We can help by streamlining the process and dress up the downtown to give it eye appeal.”

Martinez said, “A lot of businesses have challenges getting off the ground. They don’t have as much parking as they need. If we want to help our businesses, we need to talk to them.”

Abed pointed to the national economy. “Look at what has happened nationally. GDP has gone up. We cut regulations. You talk about Escondido not being business friendly. We have two thousand new business. This is a very desirable city. We are very competitive.”

McNamara said, “We need to streamline the process for starting a new business. Right now, that needs work.”

Masson said the city needs more homes to bring in people to support jobs. “We need more human capital,” he said. “We need to continue to streamline regulations to the bare minimum. We’re dealing with stuff that has been in place for years. It’s like slowly changing the direction of the Titanic. It takes time.”

Towards the end of the debate the candidates were asked about the city’s reputation.

Gallo said, “Other cities are jealous of us. We used to have the lowest median income, but that has changed. It’s a great city to live and work in.”

Martinez said the city has a “bad reputation,” because of the press that it has gotten over immigration policy in the city. “Stay out of the immigration issue,” she said. “That has affected our image as a city. I doubt that it’s something our city should be known for.”

McNamara countered, “If we had a great reputation, we wouldn’t be asked this question. I’d say to stay away from things that start this controversy. Things that draw attention to our city.”

Masson said, “We have a reputation for being business friendly. I don’t think we have a bad reputation.” He said they are recovering from bad economic and business decisions made by previous councils. “We are clawing our way back, so we can become the hub of North County that we once were.”

Valenzuela said “Most people know what they read in the paper. That’s what people read. So, they are reading of the chaos going on at City Hall.”