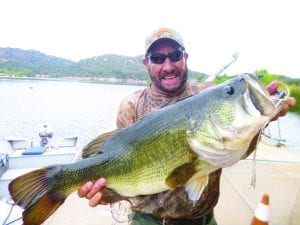 This 14.10 pound bass was caught by Martin Arenas of Escondido at Lake Wohlford September 16. Arenas is a frequent angler at the lake and has won several competitions for his fishing abilities.

Anglers are in a waiting pattern in between plantings. The last plant was 750 pounds of Channel Catfish in August and the next one of Rainbow Trout won’t be until December. But there’s still plenty of fish worth dropping your hook for, such as “voracious” largemouth bass reported below.

To protect Wohlford from invasive exotic Quagga mussels, there is a ban on private water craft and equipment that could have been exposed to mussels. Restricted equipment includes; private boats, canoes, kayaks, float tubes, trolling motors, fish finders, anchors, and other equipment that contacts the water.

Permits and boat rentals are now issued via a fully automated machine located at the Ranger Station. The machine takes debit/credit or cash. Rangers do not sell fishing licenses, bait, or tackle so anglers must acquire these essentials elsewhere prior to their visit. The lake is offering $20 all day motor boats to active military every Saturday.

Catfish are being caught particularly near the west buoy line. Chicken liver or cut mackerel are two of the most preferred baits for catfish.

The Largemouth Bass bite has been voracious over last few weekends with several monstrous sized bass hitting the scales. Martin Arenas of Escondido caught and released a 14.10-pound behemoth on Saturday using a jig in the cove adjacent to the South Shore Rock Pile. On Sunday Jordon Umhra caught and released 9.70 pound bass as well as a 7.20 pounder on frogs in Willow Cove. The bass respond well to frogs, crawdads, and dark colored plastics.

The crappie fishing is best in the early morning hours near the cover of shade or in rocky outcroppings. Crappie are most often caught on finger jigs or live golden shiners.

Each month Whopper Contest winners in four categories are awarded a free fishing and boating permit. For information on the contest or fishing conditions, please contact the Ranger Station at (760) 839-4346.