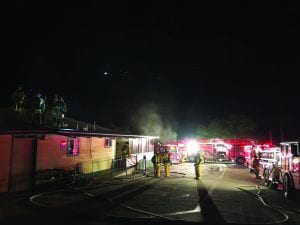 Firefighters from multiple agencies made short work of a fire at the popular resort cafe overlooking Lake Wohlford.

The cause of the fire is under investigation by the Valley Center Fire Protection District Investigators.

The owner was alerted to the fire by smoke detectors and an external alarm bell.

There were no civilian or firefighter injuries.

Damage was estimated to be $5,000 dollars in content and structural loss.  The café will reportedly reopen this week.