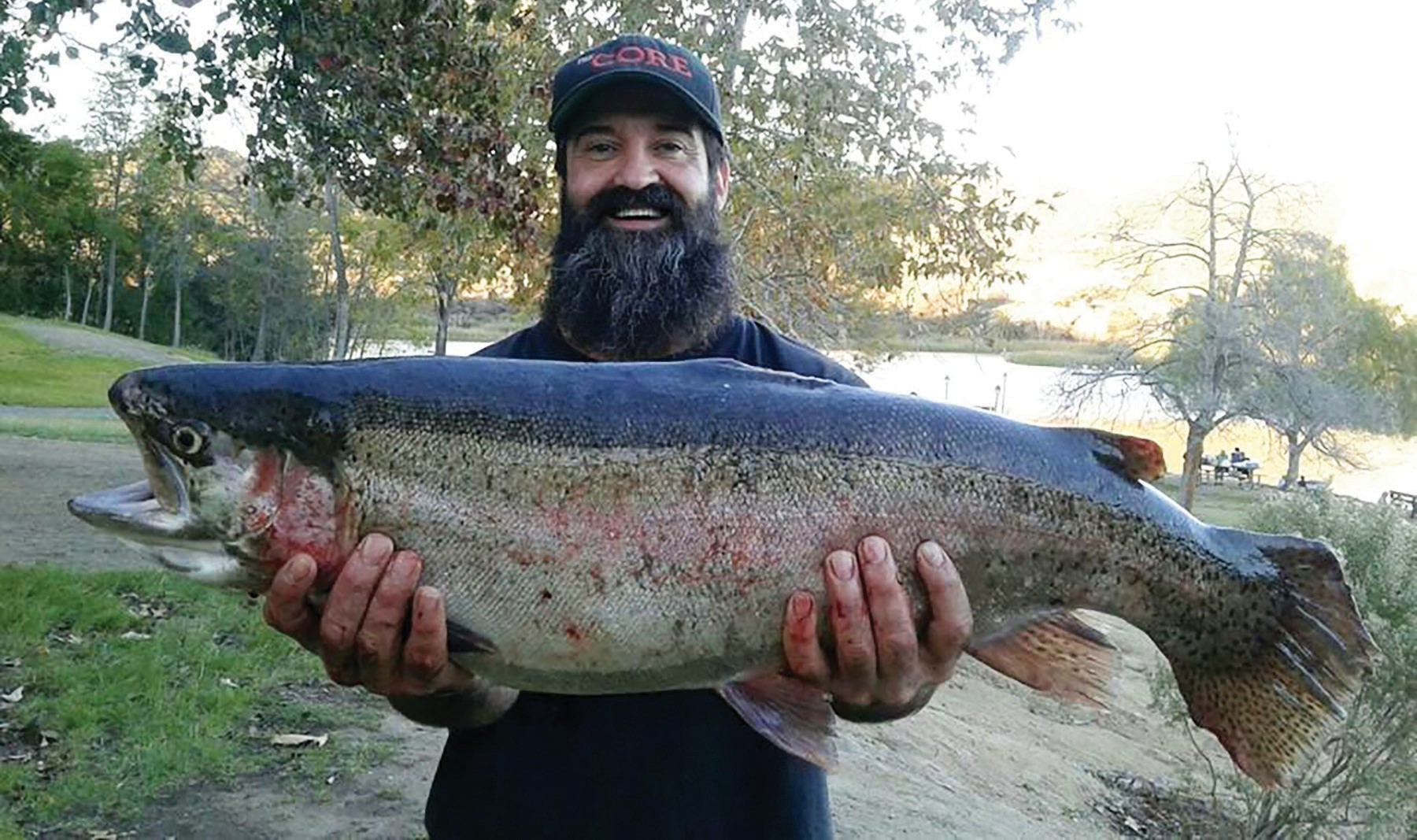 Steve Capps, of Escondido, produced not only a new derby record, but a new Dixon Lake record as well – a 16.41 pounder. He beat Stroud’s record, which was set earlier in the weekend.

December 2 was opening day for Dixon Lake’s 38th annual Trout Derby. With 6,000 pounds of Nebraska Tailwalker rainbows stocked earlier in the week, derby and lake records were broken over the three-day event.

Four hours into the derby, “It’s a good day when ten and twelve pounders are being knocked off the leader board,” said Larry Jaurett, president of the Senior Anglers of Escondido, as bigger fish kept coming in. The angler’s club were the official weigh masters.

At 10:30 a.m., Seaton Stroud, of Big Bear City, came running up to the weigh station from Dock #4, with a huge 13.89-pound rainbow, caught on a worm. “I can’t believe it, man, I can’t believe it! And on two pound test!” he said, shaking, panting, and pacing with excitement as the fish was weighed. He has been fishing the opener for the last five years.

Stroud’s trout broke the previous derby record of 13.60 pounds set in 2011 by Oceanside’s Sam Arnold. Arnold was on hand to see his record slip away. And congratulate Stroud.

However Stroud’s new record would only stand for 29 hours. Around 3:30 p.m. on December 3, Steve Capps, of Escondido, produced not only a new derby record, but a new Dixon Lake record as well – a 16.41 pounder.

The lunker was caught in Trout Cove with a new flavor of Gulp power bait – Salmon Egg Rainbow. When told of the news that his record held throughout the weekend derby, “That’s unreal,” 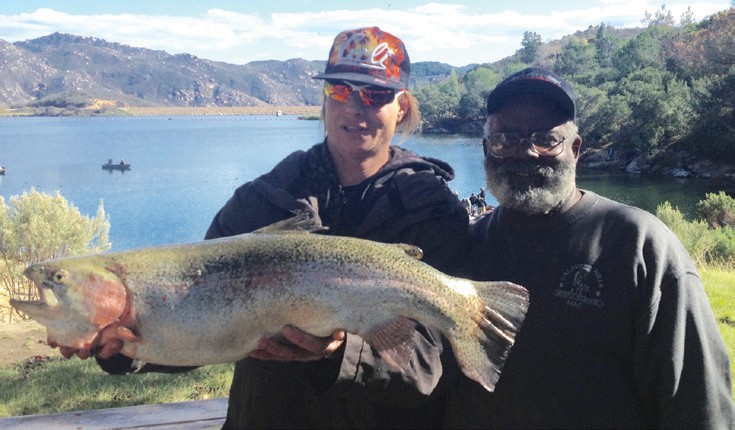 Seaton Stroud, of Big Bear City, with his record-breaking 13.89-pound rainbow. He broke the record set by Sam Arnold (right), who was there to congratulate him.

Capps exclaimed. “I’ve been fishing that lake since I was five years old. My dad first took me there and I’ve been trying all this time.”

Capps received the grand prize of a $150 in gift cards from the derby’s sponsors, the City of Escondido, Big 5 Sporting Goods, and Dick’s Sporting Goods. Prizes were also given for the first and second place largest fish caught each day, along with largest trout caught by a senior, or a kid. Fifteen lucky anglers also caught one of the 25 special tagged trout, and received a $25 gift card.

“We couldn’t believe the size of the fish we saw coming out of the [stocking] truck,” said Dan Hippert, superintendent of the City of Escondido’s fishing lakes. The stocking occurred in a remote section along the northern shoreline a few days prior. By that afternoon however, Hippert says the fish had swam all the way around the lake into the popular docks area, where many anglers would gather on opening weekend.

For the first time at Dixon, the lake was closed to fishing two days before the derby, to allow the large fish to acclimate. Rangers did have to issue a few $250 tickets to violators who showed up a few days early to the closed lake. “I guess they wanted to get a jump start on the derby,” said Hippert.

– Ken Harrison is a freelance reporter for the San Diego Reader newspaper and regularly reports on local fishing in the paper’s Waterfront section.