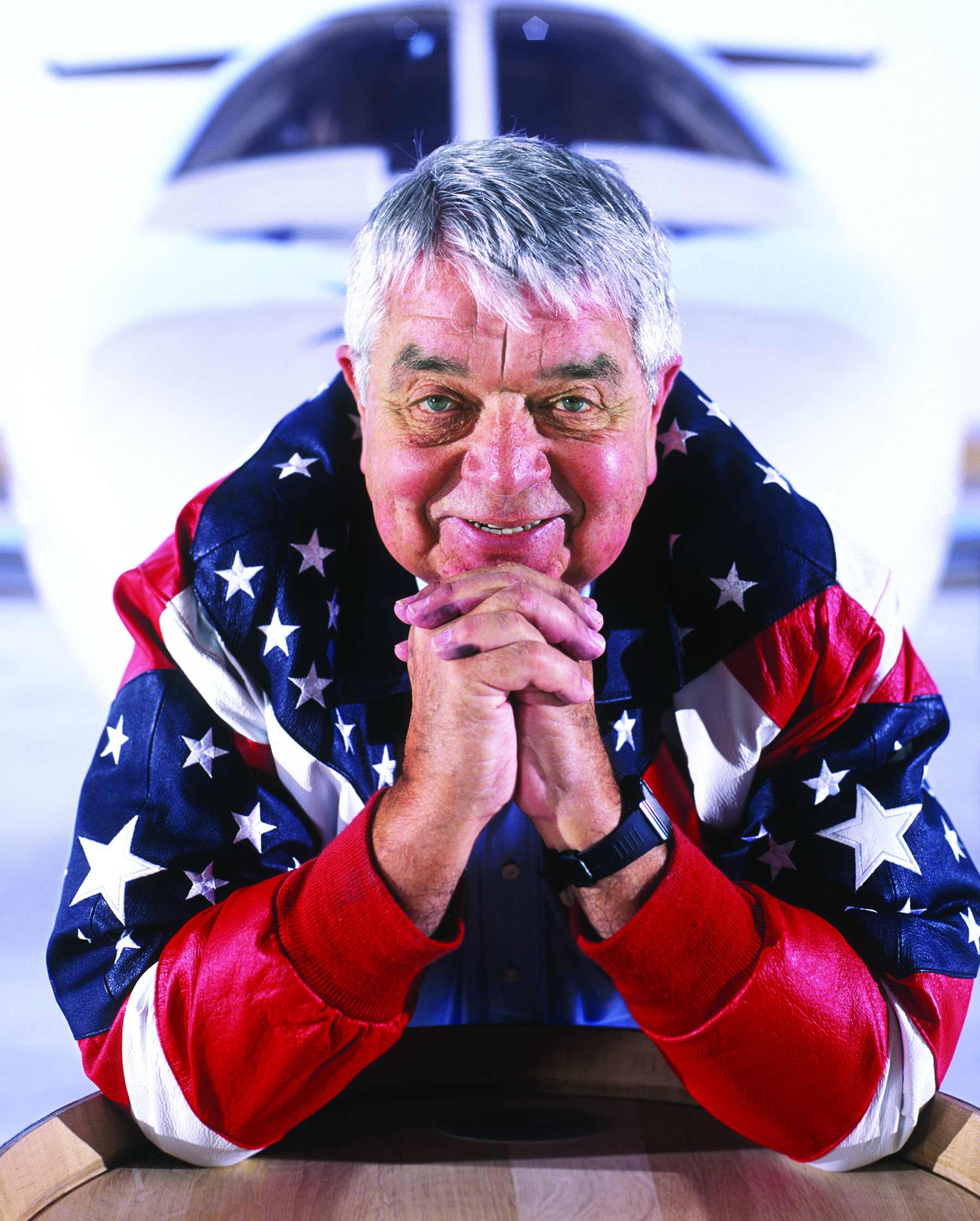 Koerner Rombauer with his airplane and a wine barrel at the Napa Valley Airport, California, October 12, 2004.

Koerner Rombauer, the founder of Rombauer Vineyards and a beloved figure in the Napa Valley over the last four decades, died on May 10. He was 83.
Mr. Rombauer is survived by his wife, Sandy, children Sheana Rombauer and K.R. Rombauer III, grandchildren Reagan, Drew, Seth, Lane, Ransome and sister Kay Thornton.
Mr. Rombauer was born and raised in Escondido, where he married Joan Ransome, his wife of 43 years. He served in the California Air National Guard as a pilot from 1956 to 1965, beginning his lifelong love of flying. Koerner and Joan had two children, Sheana and KR, who were born in Escondido and then later moved to Texas where Koerner began his commercial airline pilot career flying for Braniff International Airways in 1965.
The family relocated to the Napa Valley in 1972 where they settled in a hilltop property north of St. Helena on the Silverado Trail. In between his commitments with Braniff, Koerner began spending time learning about winemaking at Conn Creek Winery. In 1980 they founded Rombauer Vineyards. They harvested their first grapes—-Cabernet Sauvignon from the Stags Leap District—-in 1980 followed by their first vintage of Chardonnay in 1982. Joan died of pancreatic cancer after a three-year battle in 2002.
Rombauer wines, especially the Chardonnay, are beloved around the world. Such uncommon affection from the public grew partly out of Koerner’s outgoing personality, his contagious sense of pleasure for wine and gusto. He was the kind of person you could recognize from a mile away. There would be no mistaking his optimistic and sunny personality, and the confidence and pride with which he wore his signature stars and stripes jacket. He was red, white and blue, through and through. From the time he first came to Napa as a commercial pilot, he would always share his personal love of life in everything he did. His habit of including everyone around him in his enjoyment carried through into a passion for the Napa Valley, and became one of the cornerstones of Rombauer Vineyards.
The connection with the legacy of his great-aunt, Irma Rombauer, and her American classic, The “Joy of Cooking,” often provided Mr. Rombauer with an introduction to his customers and accounts. He explains that “Joy,” as the book is affectionately known around Rombauer Vineyards, helped him be perceived as someone with whom people were already familiar; he wasn’t a stranger, he was Irma’s grand-nephew. This emphasis on helping people feel at ease and like family is no small detail. It sums up the way he lived his life. The sense of graciousness and hospitality infused his decisions and his vision and became synonymous with the Rombauer Vineyards style—distinctive and inviting.
Mr. Rombauer was known as an extremely generous philanthropist. Before Joan passed away from pancreatic cancer in 2002, they started the Rombauer Pancreatic Cancer Research Fund at University of California, San Francisco. The Rombauer Family has continued to be involved in fighting cancer and in 2010 established a $4 million endowment, the Joan Rombauer UCSF Endowed Fellowship. Other causes he supported included V Foundation for Cancer Research, Collabria Care (formerly known as Napa Valley Hospice and Adult Day Services), Napa Valley Land Trust and the St. Helena Montessori School.
Mr. Rombauer’s community involvement has included serving on the boards of Napa Airport Advisory Board Committee and Tower Road Co-Op as well as being the 2011 Auction Napa Valley Chair. He was a long-time supporter of the St. Helena High School FFA and Agriculture Program and a recurring purchaser of livestock at the Napa Town and Country Fair. For many years, he was a familiar face at the Calistoga Fourth of July parade driving Congressman Mike Thompson.
His love for flying took him many places, allowing him to share his passion for life and generous spirit with countless people. When Mr. Rombauer was once asked to explain why both flying airplanes and making wine were so important to him, he answered that “Flying and winemaking are both mystical, magical things. The magic of flying is that it allows you to leave behind all that binds you to the earth. The magic of winemaking is that you create something with your own hands, from your own piece of earth, that lasts for years. If you turn out a wine that can score the highest points, or highest bid, it’s like breaking out at minimums, right over the runway numbers, knowing you’ve nailed the approach.”
Memorial church services will be held at 11 a.m. on June 5 at Grace Church in St. Helena, followed by a public Celebration of Life from noon until 4 p.m. at The Culinary Institute of America at Greystone in St. Helena. Interment will be private.
The family suggests donations can be made in Koerner’s honor to Rombauer Pancreatic Cancer Research Fund at the University of California, San Francisco, V Foundation for Cancer Research or Collabria Care.
Details: www.rombauer.com/memorial-donations/.