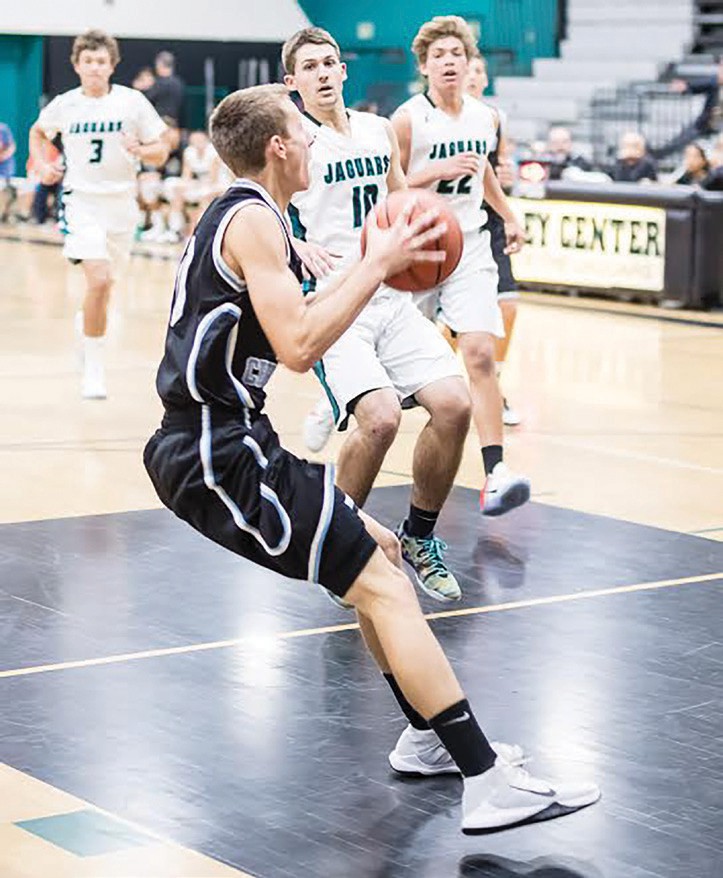 Guard Johnny Steenstra, who scored 10 points on the night, drives to the hoop.

There’s always a bit more intrigue and perhaps even motivation whenever Valley Center High takes on an Escondido based opponent. The Jags seemingly always bring a little added juice whenever they take on a neighbor from the south.

And such was the case last Friday night in VC’s season opener when it parlayed some impressive outside shooting from Josh Kirby and Kamin Davis and then rode a tenacious and active defense to a 65-50 win over Calvin Christian. Meanwhile, the setback was the second of the newly- minted season for the Crusaders who had fallen earlier in the week to San Diego High.

Decisive second and third quarters in which the Jags outscored Calvin 34- 17 were clearly the difference in determining the outcome of this meeting between foes who are separated by less than 15 miles. Kirby and Davis each finished with 18 points apiece to lead the way for the hosts while center Joshua Bakker put his post-game to good use while tallying 25 for the Crusaders.

Things looked promising in the early going for the visitors when a pair of buckets from in close by guard Johnny Steenstra and a Clay Albright banked-in trey staked the visitors to a 7-2 advantage. But then the senior Kirby, who must be a force offensively if the Jags are to have a successful season in 2016- 17, started to take over. First, he stroked a pretty 3-pointer from downtown. And then after adding a free throw, he nailed another trey late in the first quarter that gave VC its first lead at 15-13. Tellingly, the Jags would not trail for the remainder of the contest.

It was in the following quarter that VC really began turning up its defense intensity, the result being plenty of deflections, passing lanes being taken away and some critical steals. The sophomore Davis, making his varsity debut, was particularly noteworthy when he came up with a pair of nifty thefts on consecutive possessions, one of which he converted into a driving layup.

With its suffocating “D” setting the tone and getting offensive contributions from multiple players, VC scored the first 12 points of the second period, culminating 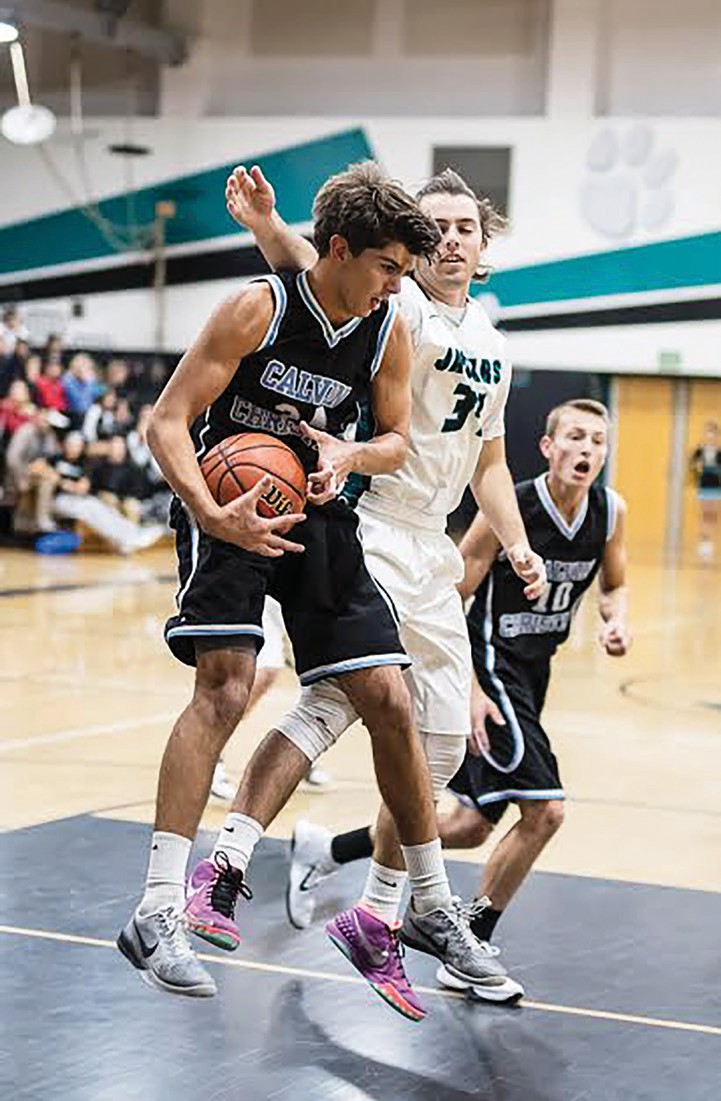 Active on the boards, Crusader Matt Lafler pulled down 12 rebounds against the Jags. Photos by Lenny Kerbs

with a Noah Tortes chippie that extended the margin to 27-13. However, the bulky Bakker did his utmost to try to keep his club within hailing distance, dropping in a free throw before putting home a sweet kiss off the glass. But at halftime, the Jags were on somewhat of a roll at 29-19 and looked to be in firm control.

And if there was any doubt about the outcome, Kirby helped remove it shortly after intermission with impressive bombing forays from the outside that basically salted things away. In one memorable stretch in which he scored nine of 11 VC points, the sharpshooting wing buried three treys, two coming on swishes from the right forecourt. Kirby had the home crowd buzzing over his long-distance marksmanship and with the Jags holding a 49-30 at the end of the third quarter, this game was clearly in the refrigerator.

In the fourth, VC was to enjoy its biggest margin of the game at 62-39 when senior Leo Gonzalez popped in a jumper from mid-range. But much to his credit, the game Bakker continued to compete and by doing so he helped make the final total a more respectable 65-50. After scoring from close quarters, he then banked another one home before using a deft move to his left to finish out his productive night.

The Jags, who have undergone a significant makeover since the departure of high-profile standouts from last year, got the kind of across-the-board contributions against Calvin that they’ll need moving forward.

Kirby was an absolute force. In addition to his 18 points and five 3-pointers, the senior demonstrated a splendid all-around game, pacing the team with 7 rebounds and 6 deflections while also picking up 4 steals.

As far as Davis is concerned, he was a revelation. Shooting with great confidence, he drilled four treys with seeming ease. The youngster was also all over the court as evidenced by his 8 deflections and 4 steals. Moreover, as VC’s point guard he showed a good handle while orchestrating the offense.

Another sophomore starter who played well was Jake Stehly, who brought energy and showed a willingness to battle inside en route to a 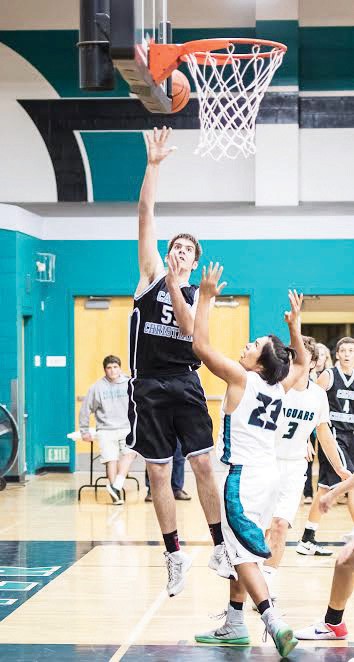 Center Joshua Bakker was an effective scorer from in low.

7-point, 3-rebound effort. The junior Tortes came off the bench to give the Jags a big lift with his 6 points, 6 rebounds, 4 assists and 2 blocks. Other subs that were real factors were Justin Roche (6 pts., 4 rebounds) and the athletic Kobe Dominquez (4 pts., 4 boards, 2 steals).

And finally, there was that hustling go-getter Joe Stehly. Though he would tally just two points, the elder Stehly set the tone for the Jags with his all-out style, scrapping for loose balls, contesting passes, getting after it on the defensive end and coming up with a team-leading 5 steals. Stehly is a rarity in basketball in that he can exert tremendous influence on a game’s outcome while scoring very little.

As for the Crusaders, as was the case in their earlier loss to the Cavers, the offense clearly revolved around the productive Bakker, who was game’s leading scorer with his 25 markers. Able to establish position in low, the junior postman showed a knack for turning either left or right and muscling up shots from in tight. Around the basket, he was tough to contain as the Jags found out. The 6-5, 190-pounder also cleaned the glass to the tune of 11 caroms.

Guard Matt Lafler had his moments as well, grabbing an impressive 12 rebounds (11 on the defensive end), making some artful entry passes (6 assists) and swatting away 4 shots. However, Lafler, who just came over from the football team after having an exceptional year as a quarterback/linebacker, will need to hone his shot as it was rather erratic against the Jags, although he did manage to drain a pair of treys.

And finally, Steenstra also deserves mention for being the only other Crusader in double figures with 10. He hit on four of his five field goal attempts, demonstrated that he can drive and even found time to block a couple of shots.

So, the Jag season is off to a promising start while the Crusaders will look to regroup in hopes of soon securing their first win. At least on Friday night, it was VC that proved it was the neighbor that possessed considerably more clout!