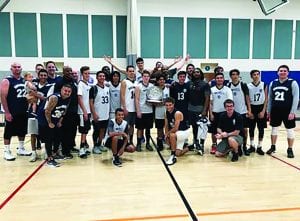 Participants in the recent PAL tournament.

On Saturday, August 5, , the police and Police Athletic League (PAL) coaches could not get the Galindo Shield back in the annual PAL tournament.

The day belonged to the PAL kids. It helped that they allowed the 6’11” soon to be European Pro basketball player Ryan Smith play for the kids again. Smith was 6’8” when he played with PAL four years ago.

However, the young kids did more damage. They were hitting all their 3 point shots and won by the first time ever blowout 57-42.

Local observers remarked that Escondido High and Orange Glen are going to have some very good players this year.  The kids now lead the series 6-2.   The event raised $6,300.00 for PAL.

PAL’s main goals are to improve the confidence of children in low-income areas and provide children a positive relationship with the Police Officers and the community. PAL relies on educational and athletic activities to cement a bond between police officers and the youth in our community.

PAL operates on donated funds and is not part of the City budget. Through private donations, PAL is able to charge very low, and in some cases, no fees for the children to participate in this program.