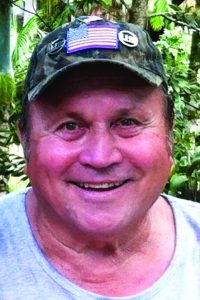 Kenneth James Gann, a 77-year-old Lake Shastina resident, who formerly lived in Valley Center and had many friends in Escondido passed away on March 11, at Madrone Hospice in Yreka.

Mr. Gann was born on May 26, 1939, in Los Angeles to William and Anna Gann. He served in the U.S. Army National Guard prior to working in construction as an iron worker for many years in Southern California. He settled down to raise his family as a longtime resident of Valley Center,  from 1977-2005, then retired near Mount Shasta in the Lake Shastina Community just outside of Weed.

Mr. Gann enjoyed fishing, playing cards, socializing, yard sales and any types of crafts. He was a Cub Scout Master, and helped in the Boy Scouts and little league baseball. He loved to make children happy, and always had plenty of time for kids. He was a father figure to many.

A memorial service was held at 11 a.m. on Sunday, March 26, at Christ Lutheran Church in Mount Shasta, with Pastor James Cavener officiating. Condolences may be sent to Delores Gann at kenanddee@finestplanet.com.