“Keanu”: The cat lives up to the hype; the movie does not 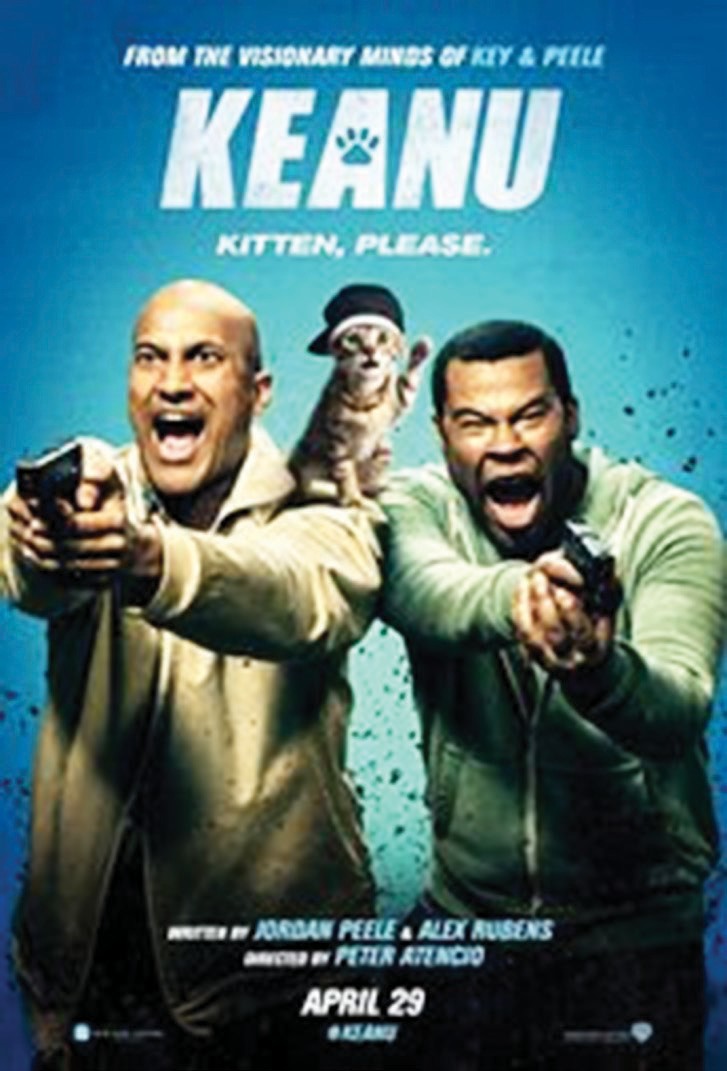 For weeks, I was dying to see “Kea­nu.” I’m a big fan of Keegan-Michael Key and Jordan Peele and their sketch show “Key & Peele.” My family loves those sketches where they play college football players with wacky names, and I personally am a huge fan of the sketch where they play devil- hating old ladies. And Key and Peele weren’t even the main attraction. That honor belonged to the title character, the cutest kitty cat in the whole wide world. Good news, Keanu the charac­ter lives up to the hype. “Keanu” the movie does not.

The plot sees Rell (Peele) devas­tated by a breakup when Keanu the kitten inexplicably arrives at his door. Rell instantly becomes obsessed with the kitkat, leaving him only to see a movie with his people-pleasing cous­in Clarence (Key). While they’re out, Rell’s house is ransacked and Keanu is catnapped. They discover that a local drug ring was behind the break-in, and plot to pose as deadly guns-for-hire to get him back. The problem is that they aren’t naturally tough guys, and they have a hard time passing themselves off as thugs.

Most of the humor revolves around the duo making awkward attempts to seem tough around the gang members. They’ll use heavy profanity (and a certain racial epithet), recount dubious violent escapades, invent slang, and spin questionable “street” wisdom. A lot of it takes the form of poorly-paced rambling. The movie could have been shorter, sweeter, and probably funnier if these two were able to blurt out an­swers to expected questions. But we constantly have to watch them stall for time while they search for an­swers that aren’t that funny. The an­swers themselves should tell that gang members that they’re faking, but what should really give them away is the lack of confidence.

This is the kind of movie where the supporting characters have to be complete idiots to believe the main characters. And then those characters seem less threatening because you know they can be so easily fooled. Say what you will about drug runners and killers, but if they’re truly at the top of their game, they know how to read people. These characters fail to read Clarence and Rell, so they must not be at the top of their game. Also, this movie has those annoying villains who can’t help but draw out deadly confrontations, which of course leads to miraculous last-minute foiling by heroes who do know how to use the element of surprise.

One gag that was definitely planned out in advance is one where Clarence convinces the gang members to be­come fans of George Michael. It’s a little bit funny to see them fawning over such passé music, but I don’t buy that they’ve never heard of George Michael. I could see the gag being that they think he’s a lame has-been until Clarence convinces them other­wise, but he’s had more staying power in popular culture than the movie is giving him credit for. By the way, I hope you’re a big George Michael fan yourself, because his music is all over this movie. I’d go so far as to say that he has more of a presence than Keanu.

Keanu himself is just as adorable as advertised. I wish he was in the movie more, but I theorize that they had a specific window of time in which to use the kitkat before he physically outgrew the part. The rest of the mov­ie is a mess. Enough jokes are thrown around that occasionally one will land (the gang makes a delivery to a drug-addled actress, who is at once more than what she seems and exactly what she seems), but it’s not enough to make “Keanu” work overall. Your time would be better spent online watching “Key & Peele” sketches, and of course the endless supply of cat videos.

“Keanu” is rated R for violence, language throughout, drug use, and sexuality/nudity. Its running time is 98 minutes.