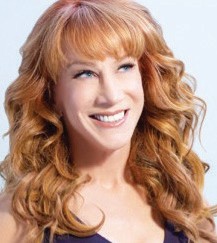 Kathy Griffin has been nominated for a Grammy six times and in 2014 won the award for “Best Comedy Album.”

The California Center for the Arts, Escondido will present two-time Emmy and Grammy Award-winning comedian Kathy Griffin on Saturday, September 10, in the Concert Hall.

Griffin will deliver her rapid-fire wit, outrageous musings on popular culture, and hilarious celebrity anecdotes. With her ability to break through the entertainment clutter with her universally recognized brand of pull-no-punches comedy, this is a show not to be missed.

Kathy Griffin is a towering figure on television, on tour and in publishing. She’s perhaps best known for her role as the best friend to Brooke Shields on NBC’s Suddenly Susan as well as her own hugely popular reality TV show, “Kathy Griffin: My Life on the D-List.” Buoyed by her dedicated fans, Griffin’s live stand-up performances are legendary and in a class of their own. She has performed at sold out shows everywhere from New York City’s Carnegie Hall to the Sydney Opera House.

In 2013, Kathy Griffin was inducted into the Guinness Book of World Records for writing and starring in an unprecedented 20 televised stand-up-specials — more than any comedian in history. She’s co-hosted the CNN New Year’s Eve special with Anderson Cooper every year since 2007. Additionally, she is one of television’s go-to-hosts for premier live events and has hosted The Billboard Music Awards, the 41st Annual Daytime Emmy Awards and AARP’s Movies for Grownups Gala.

Aside from stand-up comedy shows, hosting at events and television features, Kathy Griffin’s boisterous and revealing memoir, “Official Book Club Selection: A Memoir According to Kathy Griffin,” debuted at No. 1 on the coveted New York Times Bestseller List. She’s also won various additional awards and honors, including The Human Rights Campaign’s Ally for Equality, Iraq and Afghanistan Veterans of American’s Leadership in Entertainment honor, GLAAD’s Vanguard Award, The Trevor Life Award from the Trevor Project, and a Gracie Award for “Outstanding Female Lead.”

The Center is located at 340 N. Escondido Blvd. in Escondido. The Ticket Office can be reached at 800-988-4253. Tickets can also be purchased online. To learn more, including performance dates, times and ticket information, visit artcenter.org/