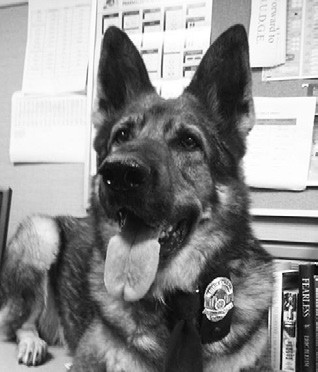 The Escondido Police Department K9 Jena was recently promoted to detective. Jena is the first dog in the department’s history to make detective.

Jena, an 8-year-old German Sheppard born in the Czech Republic became employed by the EPD in 2010 and has worked her entire career as a Patrol K9.

Her duties were searching for suspects and evidence such as narcotics, assisting officers in apprehending violent offenders, and providing K9 demonstrations to community members.

Due to the vigorous and ongoing training requirements police dogs are often retired at an earlier age to enjoy civilian life. Jena, although nearing retirement age, was not ready to stop serving Escondido and was eager for a less physically demanding assignment.

Luckily, Jena was also trained in narcotics detection. The decision was made to promote Jena to detective where her skills could be used to assist detectives with narcotic interdiction and she would not be subject to the physical demands of a patrol service dog.