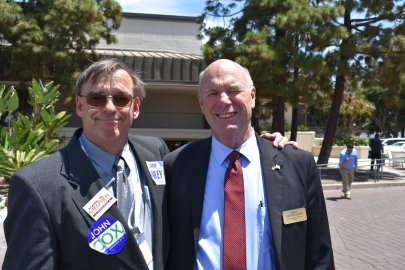 Bailey (right) with California Governor’s candidate John Cox over the weekend at the State GOP convention in San Diego.

Editor’s note: The newspaper was pleased that Judge Steven Bailey, a candidate for state Attorney General, dropped by our office Tuesday for an interview. Our policy is that we happily interview candidates for any federal, state or local position who visit our office. We don’t chase candidates and we don’t do telephone interviews.