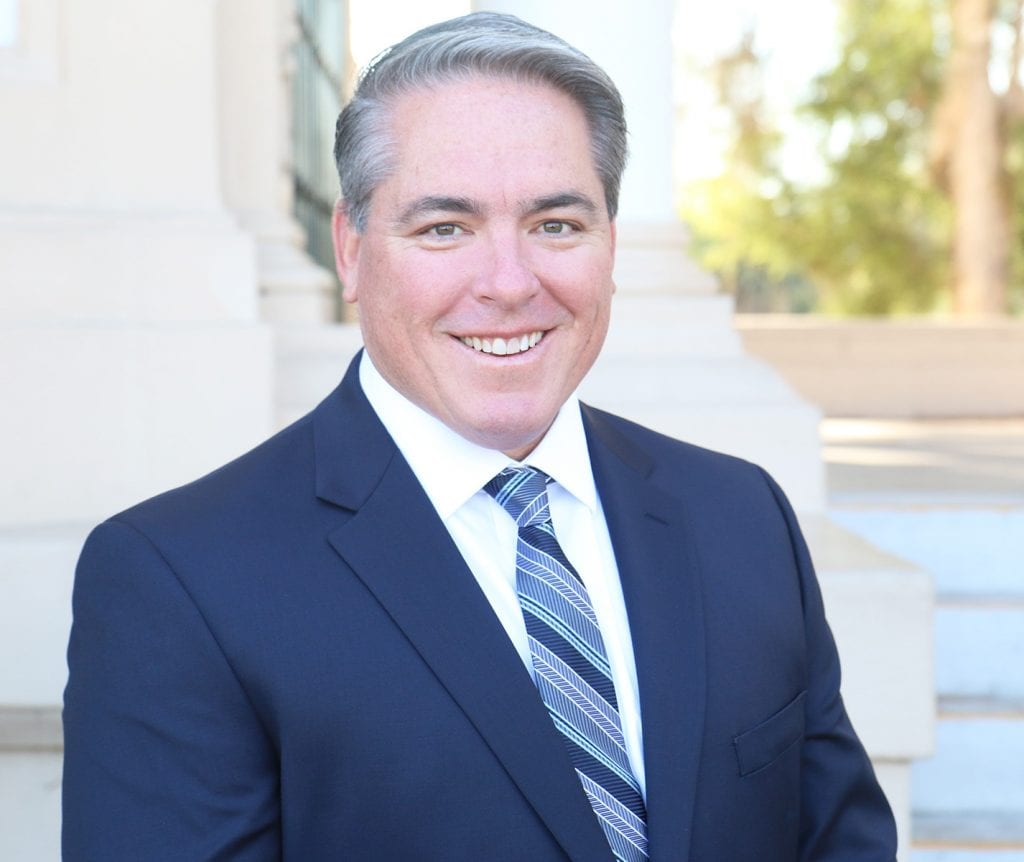 Mark Skeels is a candidate for Superior Court Judge Seat No. 22. As with all  Superior Court spots on the March 3 ballot, this is a countywide job. Anyone can vote for any of the four judges’ seats.

The 50-year-old is a prosecutor, teacher, father, and coach.  He has three children. His oldest daughter is a freshman at UC Santa Barbara and the others attend Steel Canyon High School in Rancho San Diego.

He serves as Senior Chief Deputy City Attorney for the Criminal Division of the San Diego City Attorney’s Office. He previously worked as a Deputy District Attorney in the San Diego County District Attorney’s Office.  He has prosecuted over 40 manslaughter cases and led the effort to reduce homelessness and curb gun violence. He prosecuted cases of elder abuse and domestic violence in Superior Courts and fought to prevent the release of rapists and child molesters classified as Sexually Violent Predators back into our communities.

He told the newspaper, “I have served a combined twenty years in both offices.  I have tried dozens of cases including manslaughter, domestic violence, narcotics, DUI, weapons offenses, and sexual assault.  I taught trial advocacy at the University of San Diego School of Law, my alma mater.  I am a father of three amazing teenage children.  I am a former professional baseball player with the Florida Marlins and I have volunteered for many years to coach youth baseball in both Little League and high school.

He played five years of Professional Baseball. He signed in 1992 with the Marlins. He was part of a family of players. Both his older and younger brother played professional baseball. He played until 1996 and went to the University of San Diego School of Law with the idea of returning as a player agent. But “when I had my first internship in the DA’s office I realized I enjoyed that kind of work and being in the courtroom.”

He feels that his experience in superior courts is important. “This is a state Superior Court, dealing with state court cases—as opposed to federal cases,” he said. “I’m running against two candidates who have spent their careers in the federal system, as opposed to the state system.”

He added, “The other component for a state court judge is you have to have courtroom experience. For 22 years I have been in the courtroom seeing the kinds of cases I would be presiding over. I was pleased that the San Diego County Bar Association rated me as ‘exceptionally qualified’ for the position— the highest rating.”

Asked why he is running, he said, “What I’ve seen in twenty years is that when people are in the courtroom setting, a lot is on the line for them as individuals. Whether they are a victim in a criminal case or they are in the family court setting where the judge must decide issues of child custody, it’s important to have judges who have the experience from the courtroom and also some life experience to give them perspective of what a just result would be in any individual case. The two most common assignments for new judges are criminal or family courts.”

He also cites the endorsement by the Family Law Bar Association, which he said, “has taken a more active role in evaluating judicial candidates because that is a common first assignment for new judges.”

Of his judicial philosophy, he said, “I’m certainly sworn to uphold the Constitution and I would give a strict construction to statutes and case law. I’m not an activist judge who legislates from the bench.”

He distinguishes himself from others on the ballot: “I’m the only candidate in my seat who is endorsed by such a broad spectrum of people, including law enforcement organizations, prosecutors, defense attorneys and superior court judges.” Retired Judge and former San Diego City Attorney Jan Goldsmith wrote of him: “Mark often appeared in my courtroom as a prosecutor.  He always displayed fairness, intellect, and the patient demeanor needed to make an outstanding judge.”