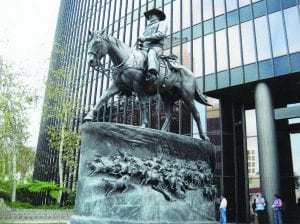 The Valley Center History Museum hopes to acquire this 6-ton sculpture of John Wayne in full cowboy regalia on horseback. It sits atop a 21-foot wide pedestal.

Valley Center History Museum is recalling the time when actor John Wayne almost served as the first Grand Marshal of the annual Western Days Parade, which Valley Center celebrated over the weekend.

At the same time, museum docents are in awe that, after 14 years, the John Wayne exhibit remains one of the most popular among dozens of displays.

In 1971, Wayne, at the time the world’s number one Western star,  was the obvious choice to serve as Grand Marshal.  Western Days had been a community event since 1950.  The parade was added in 1970, and the following year organizers issued an invitation to the actor to head the big parade and serve as the first Grand Marshal.

Wayne had been a local resident and regularly rode horseback through roads of Valley Center and Pauma Valley when he owned a 3,600-square foot adobe home on Pauma Valley Drive.  “McNally Road is my favorite riding trail,” he once declared.

The invitation to Wayne apparently was favorably received, according to correspondence with the actor’s agent in Hollywood.  However, shortly before the parade, Wayne backed out after being diagnosed with lung cancer.  He subsequently died of stomach cancer.

Museum curator Marjorie Deskovick said the Wayne exhibit, which was planned as a six-month display in 2003, has grown over the years with the addition of personal mementos, memorabilia and photographs.  In 2007, she recalled, a special exhibit marking the centennial of the actor’s birth drew record crowds.

Although Wayne missed the Western Days Parade in 1971, he may yet return to Valley Center in the form of a massive bronze statue.  The owner of a 6-ton sculpture of the late actor on horseback, which has been at a Beverly Hills intersection for years, indicated a willingness in 2008 to donate it to the History Museum.  However, complications between the owner and city officials have caused a long delay.

Museum president Earl Brown said the museum is prepared to accept the bronze sculpture and install it outside the museum and library on Cole Grade Road.  “We continue to pursue acquisition of this potential tourist attraction,” said Brown, “and have a group of volunteers and the heavy-duty equipment ready to move.”