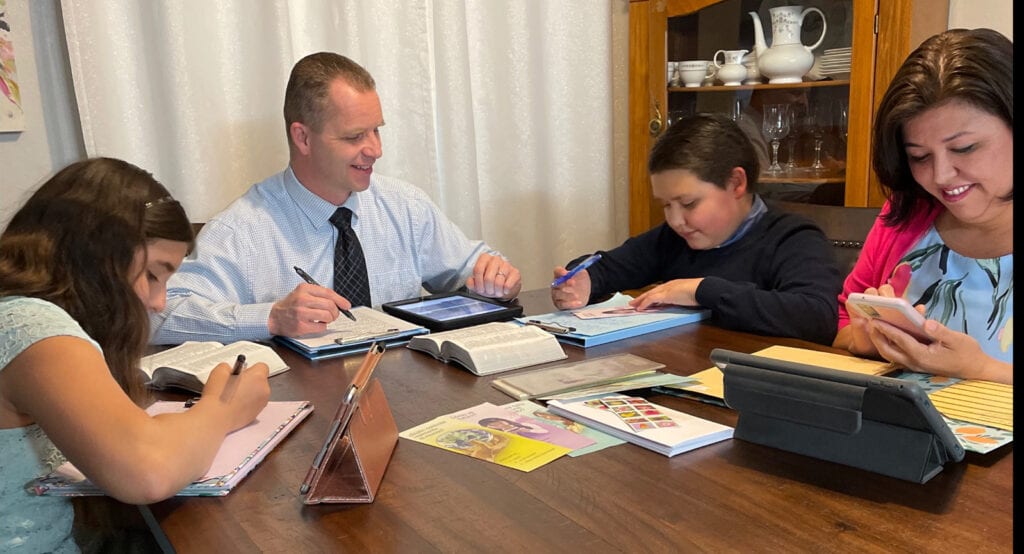 The Fisher family writing letters as part of their ministry.

It’s been one year since Jehovah’s Witnesses worldwide adjusted their hallmark methods of sharing comfort and hope from the scriptures due to the pandemic.

For many, the change from ringing doorbells and knocking on doors to making phone calls and writing letters expanded and invigorated their ministry.

“Witnesses have embraced this shift, finding the good in these trying times,” said Jamey Anderson, who reports a 15% increase in the Witnesses’ preaching activity in Escondido.

In March 2020, the some 1.3 million Witnesses in the U.S. suspended their door-to-door and face-to-face forms of public ministry and moved congregation meetings to videoconferencing.

“It has been a very deliberate decision based on two principles: our respect for life and love of neighbor,” said Robert Hendriks, U.S. spokesman for Jehovah’s Witnesses. “But we are still witnesses and, as such, we must testify about our faith. So it was inevitable that we would find a way to continue our work.”

The Fisher family had been used to going door to door in Escondido where they live now, and from door to door and from ranch to ranch in Ramona  where they lived previously. Since the beginning of the COVID-19 pandemic, however, they have had to adjust to reaching their neighbors by other means.

Though the father and mother, Jonathan and Toni, had experienced sharing the Bible’s message through letter writing and phone conversations in the past, their children, Amber and Micah, had never experienced such. As a family, however, due to their love of God and neighbor, they were able to make the adjustment.

Jonathan enjoys writing letters to people with a scriptural thought, and the follows up with the same people writing them two more letters reasoning on the thought that the original letter addressed.

Toni enjoys writing letters, and texting family members, neighbors, and workmates sharing encouraging thoughts based on the hope that the Bible provides.

Amber, 12, is rather shy when it comes to speaking with people face to face. However, she has really enjoyed writing letters to her neighbors on different subjects, writing up to three letters every weekend.

Micah, 10, struggled with writing before the pandemic hit. However, with patience and a lot of hard work, his writing and penmanship have improved greatly. Not only does he enjoy writing to neighbors and family, but it has contributed to his improving his grades in school.

The Fisher parents couldn’t be more proud of their children. And the unity that they share as a family as a result of working together on this new form of their ministry has been the biggest blessing of all.

Nearly 51,000 people in the U.S. last year made a request for a Witness to contact them, either through a local congregation or jw.org, the official website, according to Hendriks. Since the outbreak, Witnesses have followed up on these requests via letters and phone calls instead of in-person visits.

“Our love for our neighbors is stronger than ever,” said Hendriks. “In fact, I think we have needed each other more than ever. We are finding that people are perplexed, stressed, and feeling isolated. Our work has helped many regain a sense of footing – even normalcy – at a very unsettled time.”

Nearly 50 years ago Lorrita Parsons vowed to do the Lord’s work as one of Jehovah’s Witnesses. She could often spend a full day preaching from door-to-door, conducting in-home Bible studies, and standing with a cart displaying Bible-based literature at a local train station. Then age slowed her down. “I just didn’t have the energy to stay out as long,” said Parsons, 83, of Southern California.

But during the pandemic, she has regularly participated in virtual ministry groups, making dozens of telephone calls and writing more than 400 letters. “None of us like being in this pandemic, but I can go all day if I want to and not tire out,” she said. “I feel like I got a second wind.”

Parsons said the door-to-door ministry will always be her preferred mode of preaching; but when it resumes, she won’t stop calling people and writing letters. “I see the value in it,” she said. “We’re reaching people. Sometimes they can’t come to their door, but they’ll get their mail.”

Witnesses have also made a concerted effort to check on distant friends and family—sometimes texting links to Bible-based articles on jw.org that cover timely topics, such as isolation, depression, and how to beat pandemic fatigue.

Jamey Anderson reports about a 20 percent increase in online meeting attendance. But perhaps the most significant growth is in an area that cannot be measured by numbers.

Many local Jehovah’s Witnesses feel like they’ve grown in appreciation for other avenues of the ministry, love for neighbor, and love for one another.

After decades away from the faith, in March 2020, Dean visited JW.org, the official website of Jehovah’s Witnesses, and requested to be contacted. Within a week he was contacted by a local Jehovah’s Witness and started studying the Bible three times a week.

Dean no longer smokes or uses drugs. He is once again active as one of Jehovah’s Witnesses. He was amazed how many Bible study tools and videos are available today compared to when he first studied the Bible in the 1970s. He says he’s never been happier and he is excited to share Bible truths with his friends and neighbors. Like all of the nearly 9 million Jehovah’s Witnesses worldwide, Dean is sharing the Bible’s message by making phone calls and writing letters.

There are 16 congregations of Jehovah’s Witnesses in four different languages in Escondido and Valley Center.

For more information on the activities of Jehovah’s Witnesses, visit their website jw.org, with content available in over 1,000 languages.

3 responses to “Jehovah’s Witnesses’ year without knocking on doors”