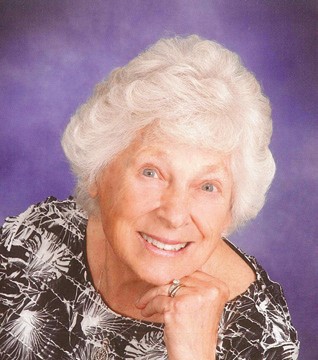 Jean Lydia Kraus passed away quietly on Tuesday, December 2 shortly before her 89th birthday. She had recently spent Thanksgiving Day in the company of many of her family and was surrounded by her sons and daughter as she passed.

Jean Riker was born in Spring Grove, Pennsylvania on Dec. 16, 1925. Despite the loss of her father at a very young age, Jean had wonderful family memories being raised by her mother and many aunts. She trained as a Registered Nurse at Mount Sinai Hospital in New York and then took off with a girl friend on an adventure to California. In Los Angeles her brother, Earl Riker, invited her on a blind date with Dick Kraus, who became her husband on December 1, 1952.

Much moving and traveling ensued due to the nature of Dick’s job, but nothing interfered with Jean’s ability to make friends, her desire to contribute to worthy causes, and her ability to create a warm and loving home for her growing family of three sons and a daughter. Dick and Jean Kraus spent most of their marriage in San Gabriel, California, and their retirement in Valley Center, but also travelled to almost every continent, where they made lifelong, global friends.

In addition to raising her family Mrs. Kraus found time to continue her nursing career, and share her passion for music as a piano teacher. She also taught English as a second language. After “retiring” to Valley Center she continued to teach piano, spent many years as the choir director at Light of the Valley Lutheran Church, where she was a founding member, continued her involvement with the PEO philanthropic organization, was president of the Valley Center Republican Women’s Group, secretary of the Dos Valles Garden Club and above all beloved babysitter for her 12 Grandchildren!

Mrs. Kraus will be remembered for her many activities; but above all for her loyalty to friends, her love of family, church and PEO sisters and above all else her smile that could brighten any day. She will be remembered with great joy by her children: Hank, Sue, Bill, and Tim, her daughters-in-law, and her 12 grandchildren.

The community is invited to a celebration of life on January 31 at 1 p.m. at Light of the Valley Lutheran Church, 28330 Lilac Rd., Valley Center, and afterwards at the home of her son, Hank Kraus, 11760 Betsworth Rd. Valley Center.