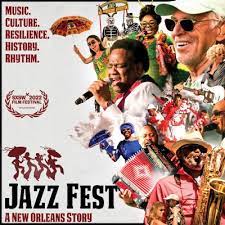 I love music. I love documentaries. So it seemed this documentary was right in my wheelhouse. It doesn’t help that this comes just after seeing the great music documentaries Summer of Soul, as well as ones on Creem Magazine, the Velvet Underground, Beatles (Get Back), Beastie Boys, and Billie Eilish.

Director Frank Marshall did some movies I wasn’t so fond of (Congo, Arachnophobia), but has done some solid music documentaries of late (Carol King & James Taylor, Mr. A & Mr. M, Laurel Canyon, The Journey of Johnny Cash, and The Bee Gees: How Can You Mend A Broken Heart). Yet Marshall and Ryan Suffern made us suffer with what comes off as more of an hour and a half infomercial for the New Orleans Jazz & Heritage Festival. There were times I was watching gumbo being prepared and thinking – you’re spending more time on the food than the incredible Gary Clark, Jr.!

Maybe the filmmakers felt showing it in a cultural context would give it a more Woodstock-esque vibe. Yet you can only watch so many people dancing poorly in tie-dye shirts.

Watching as they went from stage to stage brought back sad memories of how great the San Diego Street Scene was back in the day. Sure, we didn’t have beignets or crawfish kabobs, but we had a great variety of bands. Speaking of which, Jimmy Buffett is featured heavily in this. Now, just as I always made fun of the Utah Jazz for being an NBA team in the least jazzy state in the U.S., Buffett isn’t a name that comes to mind when I think of jazz artists (although it does make a bit more sense when they explain his involvement). Now, B.B. King and Louis Armstrong are shown in brief archival footage from the early days. I would have liked a bit more of them, though.

It’s a bit of fun to see marching bands, or a merry-go-round with a group playing live inside it. Take that, side stages of the Del Mar Fair!

Tom Jones is the biggest talking head involved, and too much time is spent with musicians that aren’t household names.

It was interesting to learn about Quint Davis, a teenager who helped organize the first festival in 1962, and is still involved. Because of Jim Crow, this festival didn’t really get going until the early ‘70s. Its incredible to think this was organized by a Jew, George Wein, that didn’t even live in the Big Easy. The Festival is celebrating it’s 50th Anniversary, and had as expected, a two year pause because of Covid.

Yet there ends up being so much discussed here, the 95 minutes feels like three hours.

After Hurricane Katrina, Bruce Springsteen showed up the following year, and he performed “My City in Ruins.” That was moving.

You’ll get to see many artists, including blues guitarist Sonny Landreth, the Zydeco Hellraisers, and more contemporary artists like Earth, Wind, & Fire, Pitbull and Katy Perry with a full gospel choir.

The concert footage was cool. I loved seeing Al Green and Herbie Hancock.

The segment on the Marsalis family was interesting. It’s a shame that more of this wasn’t interesting or all that informative.

And the closing credits will have Jimmy Buffett, also the executive producer, singing “You Can’t Always Get What You Want.” A non-jazz artist, covering another non-jazz artist.

This music documentary was a missed opportunity.

Josh Board is a member of the Critics’ Choice Awards and his reviews can be heard on KOGO 600 AM every Friday morning.