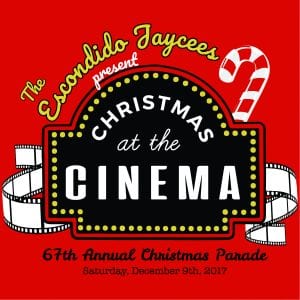 Take two American fascinations, the movies and Christmas, and combine them, and you have the theme of this year’s 67th annual Jaycees Christmas parade, which will be held December 9 along Broadway from Escondido High School to Grape Day Park.

“Christmas at the Cinema” is the theme that all entries must at least make some attempt to address. This year the theme was the brainchild of Jeff Beck, the director of the Valley Center High School band, one of four high school bands that takes part in the parade each year. The others are Escondido High School, Orange Glen High School and San Pasqual High School.

Kim Michel, who is chairing the parade for the third year, but is also the Jaycees’ president told The Times Advocate: “Jeff Beck had emailed me that it would be fun to do the movies as the theme. And it had been a while since we had a theme like that—so we went with it.”

Although the Christmas and cinema elements are involved, that doesn’t mean that an entry would have to, say, reference an actual Christmas movie like “Home Alone,” “Christmas Story,” “It’s a Wonderful Life” or even “Die Hard.” You could, for instance, have an entry with a Santa Claus dressed as Darth Vader (something that is just so basically wrong and twisted that I don’t even know why I went with it. On the other hand, I’ve seen Death Star Christmas ornaments.)

The parade begins at 9:30 a.m. and will be over about two hours later.  About 100 entries are expected, including four marching bands, the city council, Mayor Sam Abed, Assemblywoman Marie Waldron of the 75th District, all riding in convertibles.

The parade is run completely by volunteers. Organizers pride themselves on a community feel as most of the parade entries and volunteers are from Escondido and have been participating over several generations. The club has about 25 members—and is always looking for more.

Some other examples of parade entries are youth karate and tae kwon do, Little League baseball teams, Boy Scout and girl scout groups, school clubs, and equestrian groups.  There will also be queens from the Valley Center Stampede Rodeo, Vista, Escondido and Rancho Bernardo.

The deadline to enter the parade is November 15.

Awards will be given out about half an hour after the end of the parade at Grape Day Park. They will be presented at the Train Station stage. Participants are required to show up for their awards, as they committee won’t hold onto them afterwards and or try to deliver them.

The parade is a fundraiser for the Jaycees, and so the club will be selling advertising space in the program that volunteers will be passing out along the parade route.  The programs are free to the public.

Michel’s co-chairman is Dave Blickenstaff, who has actually been involved in putting on the parade for many years. “He’s been doing this much longer than I have,” said Michel. “He’s a huge help.”

An event that will take place in conjunction with the parade is the Christmas on Maple celebration, which will be held from 10 a.m. –3 p.m. on Maple Plaza.

Did you make your list and check it twice? Come shop at the Holiday Boutique where they will have over 50 plus vendors selling wonderful unique and hand-crafted items to help you finish your holiday shopping. There really is something for everyone, including your pets.

Many local businesses and restaurants have deeply discounted specials for the Holidays. Give them a look and remember to shop local.

There will be an awards ceremony at the Grape Day Park Train Depot following the conclusion of the parade. If you signed up to compete, you are required to send at least one representative to the awards ceremony.

If you’d like to enter the parade, you have until November. Remember, that the organizers are still looking for classic convertibles to transport the VIPS in dignified style.  Call 760-705-4151 or email parade@escondidojaycees.org.