Mercedes Benz of Escondido GM Jason Cestaro in the driver’s seat, with some of his staff, including Dan Casey, Rhett Saunders, Angel Cruz and Jenna Flynn (seated.)

Jason Cestaro, the ebullient, boyish general manager of Mercedes-Benz of Escondido, has a luxurious, spacious office — but he doesn’t spend much time in it. Instead, he is constantly on the move of the floor of this large car dealership that recently won the 2015 Mercedes-Benz “Best of the Best” Dealer Recognition Award and just a few weeks ago copped the 2016 Automotive News “Best Dealerships To Work For” award.

As he prowls the dealership he tosses off happy greetings to his employees. These are people, he says, he “works with,” rather than people who “work for him.” One of Cestaro’s tenets of leadership is that the employees should “have fun.” Obviously car sales and service is a high-stress profession, but if the employees aren’t having a good time, that will reflect in all kinds of ways, from quality to customer service, he says.

One of the most visually prominent car dealerships in Escondido due to its huge American flag that can be seen from I-15, Mercedes-Benz is part of Group 1 Automotive, which owns and operates 161 automotive dealerships, 212 franchises, and 37 collision centers in the U.S., U.K. and Brazil and 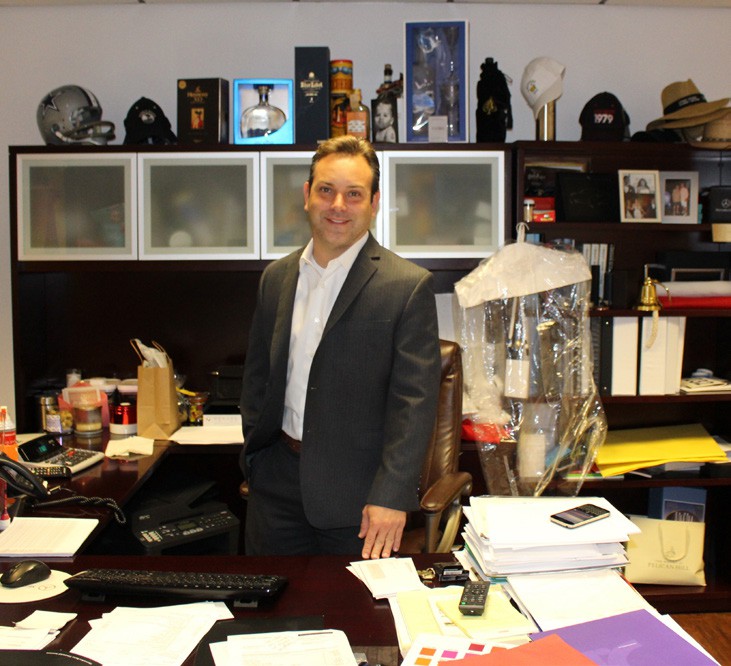 Jason Cestaro, general manager of Mercedes Benz of Escondido in his office, where he rarely spends much time.

Several years ago Group 1 purchased the dealership from longtime owner Angelo Damante, who was himself a pillar of Escondido’s business community for decades. In its day the dealership sold 450-500 cars a year.

Cestaro arrived to be general manager two years ago and soon began revving the company into a high performance culture of excellence. But he had a good solid staff to begin with, one with literally centuries of experience. 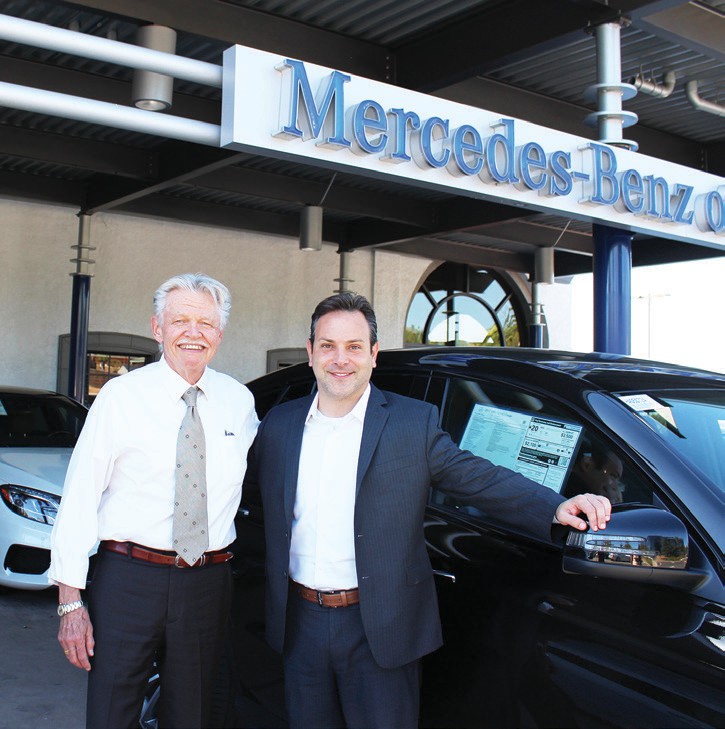 Jason Cestaro and one of his veteran salesmen, Mike Guerin.

good works,” says Cestaro. He serves on the board of the North San Diego Chamber board of directors, and was one of those who helped start the Chamber’s annual Hero awards.

“It was amazing to see all of those police officers, firefighters and fire chiefs all in one room,” says an admiring Cestaro, who handed out the Hero awards at this year’s event at the California Center for the Arts, Escondido.

Not too long ago Cestaro was asked to join the San Diego Good Guys, an organization that he really likes because no one involved with it takes a dime for their time, and all of the money raised is directed to help people. “We don’t give a hand out — we give a hand up,” he says. The board makes the decision who to help. “It’s pretty great!”

He loves doing things for the 140 employees of the company. “We do golf tournaments. We go shooting. We have monthly dinners and sometimes I cook and sometimes I serve,” he says.

At their annual holiday lunch he brings out Christmas presents. “Everybody gets a present,” he says. “And we try to be practical and get 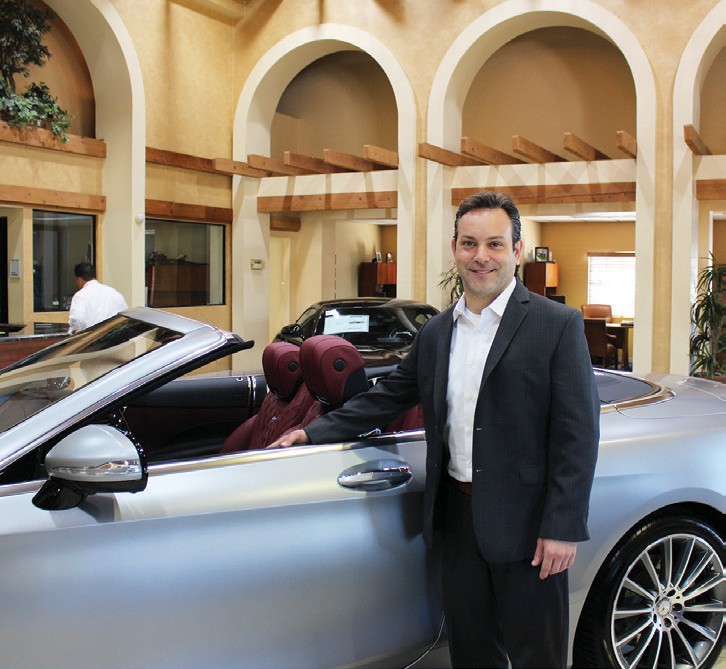 Jason Cestaro with one of the luxurious new Mercedes Benz automobiles in the Escondido showroom.

gifts that people can actually use and appreciate. It’s amazing to see them eagerly opening the gifts and swapping them for things they want. I definitely should have bought more Ninja blenders last year. You should see the two vans we fill up! Everybody should have a holiday and everybody gets bonuses.”

He is looking at a big year in 2017. “We are starting a huge remodel next year, and, of course, we will be doing everything we can to boost sales,” says the GM.

“I’m running a dealership that is very dynamic,” said Cestaro. He attributes that success to the way he treats his employees and encourages them to treat him.

“I believe in two way communication — not one way,” he says. “I listen just as much as I speak and sometimes more . We try to be as open as possible to new ideas and the impact of that is huge.”

Next: “Respect for those who work with you. Knowing everyone and being approachable. Having the attitude that we will do anything — anything, and the culture that says it’s all right to try and fail.”

And finally: “When you have excellent employee 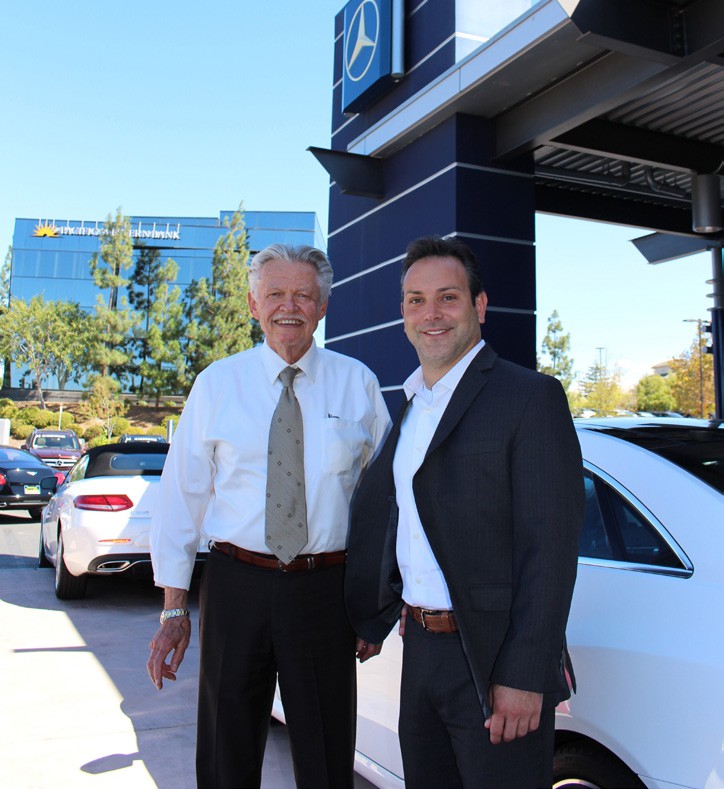 satisfaction you are going to have great customer service. We let the customers know we are doing everything we can to make them happy.” They use unhappy customers as a way to coach employees on how to improve customer satisfaction. “Even though fifty-five out of fifty-six customers might be happy, that’s still not enough,” he says.

He added, “One of the biggest things we do is have a lot of fun. It’s a very competitive business. It’s also a very complex business. Sometimes you don’t think about the fact that parts for the Mercedes are manufactured by thirty five different companies. The sales staff must know their customers in and out and know their product intimately so they can meet their customers’ needs. The only way we are going to move forward is if everyone is having a good time doing it. I am proud to be part of this hardworking and talented team.”

As for worrying about the business. “That’s my job!” says Cestaro. “The employees don’t need to worry about anything except doing a great job and having fun.”