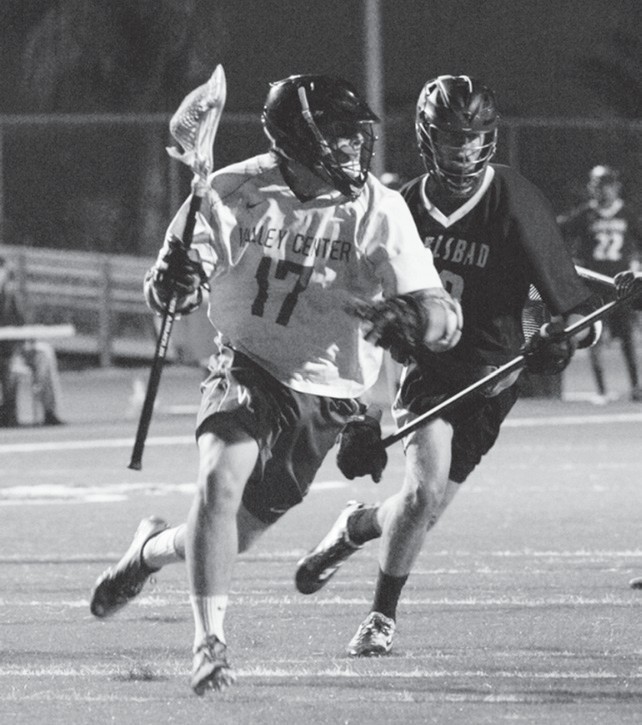 In the case of Brewster, the stick he employs seems to have almost mystical qualities. In the hands of the 6-1, 190-pound senior, his instrument of choice becomes a many splendored thing, used for flicking accurate passes, unleashing bullet-like shots, gracefully scooping up loose ground balls and helping to keep offensive-minded opponents at bay. In so many ways, it appears as if the stick and Brewster become one in the same, as if they take on the same personality.

Brewster’s obvious rapport with his stick is an overriding reason why he has ascended to exalted status on the San Diego prep lacrosse scene. But it’s far from being the only asset that has transformed him into a flat out stud on the field. His powerful body, featuring broad shoulders and sturdy legs, makes him a physical match for anybody. And then there is what rests upon those aforementioned shoulders. A most functional head that is both analytical and keen, one that reveals a sizeable lacrosse IQ. Brewster has a solid physique that meshes neatly with an engaged mind.

Brewster’s rise to excellence has been a relatively rapid one. Taking up the game in the fifth grade, it was just three years later that he earned a spot on a San Diego All-Star team. Seemingly a natural, Jason’s progression continued unimpeded. That ultimately led him to becoming a mainstay on the Nike 3D Select team, a squad of elite talent that travels the country, taking on some of the best club teams in the land.

Brewster’s impact at Valley Center has been every bit as dramatic. So skilled that his versatility had to be prioritized, he’s been employed both on defense and as an attackman. He’s been a four-year starter and a threetime captain. He’s also garnered plenty of recognition along the way including being tabbed last season’s Valley League Player of the Year. But perhaps his most significant achievement as a Jaguar was being the driving force behind VC capturing the 2014 CIF Division II Championship.

Because of the diversification that Brewster brings to bear, VC’s upbeat and charismatic young coach Robert Talley knows it’s incumbent on him to maximize Jason’s talents wherever possible. Brewster’s all-around gifts are such that Talley considers him to be a once-in-a-decade type of player. Thus, Talley places him in a variety of roles to optimize his many strengths and ensure that his coach is getting the most out of him. Though Brewster’s primary function is as a defenseman, he is just as dynamic on the attack. Brewster can switch seamlessly from defense to offense.

But it’s on the back end where Brewster does his most physical work. Able to move and change directions adroitly, Jason hounds and harasses foes whenever they possess the ball. Rarely does he give them a chance to breathe. And when he puts his body into someone, the reverb can almost be felt in the stands. He also does a masterful job of keeping opponents at bay with his stick, making it tough for them to penetrate his space or make any sort of headway towards the goal. He knows plenty about walling someone off. Asked what he enjoys most about playing “D,” a smile creases Jason’s lips. “I love it because you don’t get beat up as much. You’re the one who gets to do the beating.” And he relishes the inherent challenge that a defender faces. “There’s nothing better,” says Brewster, “than getting into a one-onone matchup with a player and being able to shut him down.”

Another area where Brewster distinguishes himself is his nose for ground balls. Quick to close on any ball that lies loose, he is like a vacuum cleaner when scooping them up. His hefty total of 90-plus ground balls has him as the clear-cut team leader in that key statistical category.

And the checklist of things that Jason excels at is certainly not limited to what has already been mentioned. For instance, his passing is both precise and snappy. Be it from short-range or long- distance, Brewster’s passes are continually on the mark.

His knack for unleashing velocitylaced shots is no less noteworthy. He is a dangerous threat any time he’s around the goal. He gave a prime example of this in the Jags regular season finale against San Marcos. While deftly moving away from pressure, he fired a seed that found the net’s top corner and left the goalie grasping for nothing but the chilled night air. Make no mistake, Brewster can be an offensive force as well. The fact that he’s tallied 21 goals while operating upfront on just a parttime basis speaks to his undeniable value as a scorer.

Jason’s biggest booster is and will forever remain the man who’s seen him accomplish some mighty impressive feats during the past four years. Coach Talley absolutely rhapsodizes about the overall package that is Brewster. “He’s a big, strong athlete with real intelligence and superior stick skills,” Talley states. “ He’s a special player blessed with great awareness. There’s not a situation that comes up in which he doesn’t know what to do.”

Though Brewster is a big reason why Valley Center has ascended to a place of prominence, his teammates must share in the glory. Senior attackman Ian Leek, just to name one, has been an indispensible component in VC’s rise. Armed with speed, nifty moves and a bang-up shot, Leek is among the county’s most productive scorers.

This year’s team, backboned by a core of experienced players, has continued to enhance the Jags’ brand. Their accomplishments have been nothing short of majestic. Currently ranked 9th in the section and 34th in the state, VC just finished the regular season with a 14-3 record and an unblemished mark in the Valley (League). Moreover, the Jags’ play has been so spectacular that it has elevated them into the Open Division for the upcoming playoffs. That’s the upper crust of the sport, the absolute pinnacle.

Back to Jason, where later this year he will find himself attending the University of Maryland, Baltimore County, a school renowned for its lacrosse. Securing a full ride to a Division I school is the culmination of a longtime dream for Brewster. Knowing that a couple of spots are opening up on defense at UMBC has him excited about the prospect of possibly being able to grab a starting job once he gets back there. He is also highly motivated to prove that kids from California, often considered outliers by the East Coast establishment, need not take a back seat to anyone.

Will Brewster’s dominance translate to the next level? No one knows for sure but it would be foolish to bet against Jason’s wondrous stick. Like Excalibur, there’s something magical about it.