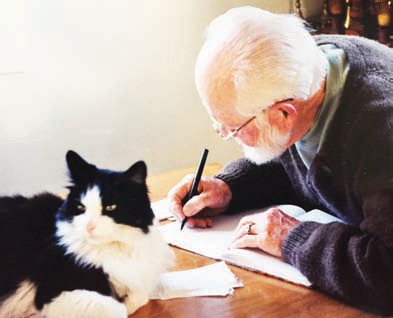 Jim Gray, age 93, a resident of Cloverdale for the past 32 years, died on Friday, August 12, just a week shy of his 94th birthday. He died at home with his wife Marge and daughter Susan by his bedside.

Jim Gray and his wife, Marge, lived in Escondido for 34 years and owned an art gallery there. Both of his daughters still live in Escondido.

Jim and Marge’s relationship started at the Minneapolis School of Art, where they met and enjoyed a lifetime love of art. Jim’s passions were sculptures carved from wood and made from clay, writing haiku, gardening and cultivating bonsais, all done with a sense of humor, according to his wife. “He had a wonderful sense of humor that was evident in his human sculptures and masks,” said Marge.

After graduation in June, 1948 and their marriage the following September, Mr. Gray earned a scholarship to study with Yugoslavian sculptor Ivan Mestrovic in Syracuse, New York, where he studied for a year and Marge taught grade school.

From New York, the couple went to Ketchikan, Alaska and then traveled south along the Pacific coast heading for New Mexico. They stopped in Escondido, where an uncle of Jim’s lived. And they stayed there for 34 years, owning an art gallery and raising their family. Mr. Gray completed many large commissioned sculptures there.

They left Escondido and their gallery in the care of their daughter, Syma and in 1984 Jim and Marge came to Cloverdale, where they became immersed in the community. One of his many legacies is the garden at the Cloverdale Historical Society. He could be seen planting, weeding and caretaking the garden there for years. He and Marge did many art shows together with Jim showcasing his sculptures and Marge her paintings and quilting. Mr. Gray also donated pieces in support of many local fundraisers.

Mr Gray’s last written haiku in his 51st book of haikus in May, 2016 gives his family and friends a glimpse of Jim’s insight.

Not all strength comes from without

Much comes from within.”