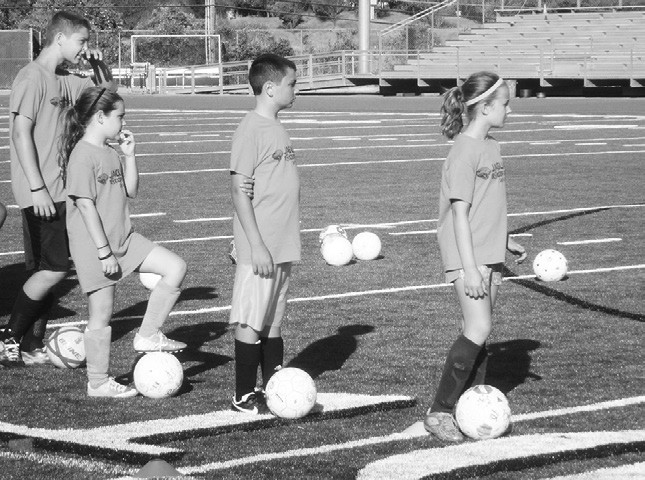 The Jaguar Soccer Camp, which recently concluded its second year of operation, works on so many levels. It succeeds because it does a splendid job of drawing the proper balance between instruction, drills, encouragement, positive reinforcement and making sure that there’s plenty of fun involved.

Yes, the core principle of the JSC is to ensure the fact that the participants receive first-rate individual and group instruction but that it is done so within the confines of a most conducive environment. To be sure, there is structure but the atmosphere is casual and relaxed, a feel-good vibe to be found everywhere. It is an ideal setting in which to learn, grow and develop an affinity for the game.

The JSC, aided greatly by the support of the Valley Center Youth Soccer Board, was held on the newly installed Astroturf field of Valley Center High School from July 6-10. Each day’s session lasted about two and a half hours. There were approximately 60 campers, ranging in age from 7-15, with an almost equal breakdown between girls and boys. Most of the youngsters who signed up were local, with a heavy Valley Center emphasis.

Plenty of volunteers were also involved in the teaching and running of drills. Their presence allowed for more individualized attention that wouldn’t have been possible without them. A total of 12 members of VC’s boys’ varsity team were among those who pitched in, shared their knowledge and worked closely with the kids.

The cost to attend the JSC was 100 dollars. In addition to the hands-on training they received, each camper was given a colorful shirt, a soccer ball and a wristband with motivating words inscribed on it.

It is hoped that the JSC will ultimately generate, after expenses, somewhere in the neighborhood of $5,000, with all that money being funneled back into the boys’ and girls’ soccer programs at VCHS. In this regard, the camp serves as a sort of fundraiser to help ensure the fact that soccer at VC is viably maintained and can meet any necessary expense or expenditure.

An important note must be made here. Not one of the coaches who participated in the camp was compensated. They gave freely and willingly of their time in an at- tempt to create more of a groundswell of interest for soccer 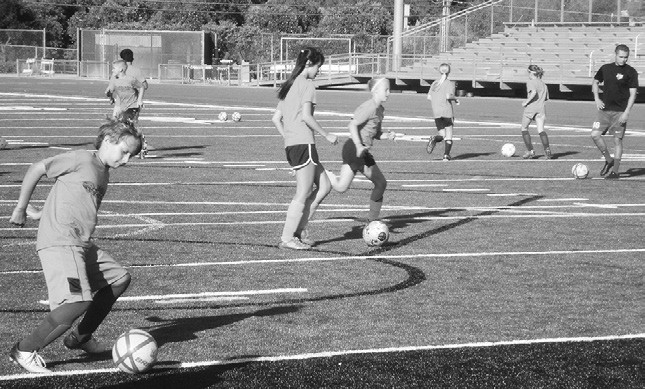 Dribbling skills were greatly emphasized at the Jaguar Soccer Camp

in Valley Center and its surrounding areas.

Since this was an all-inclusive camp, there was a variance in skill level among the many participants. There were some who were quite adept and advanced, others who showed promise and were continuing their learning curve and there were those who were completely new to soccer. But no matter the camper’s experience or familiarity with the game, there was something to be learned, something to be gained. The fact that the JSC could appeal to so many, no matter how proficient, underlines its inherent value and worth.

When asked to describe the JSC’s fundamental purpose, Dale Blasius offered a ready answer. “First, we’d like to help the kids develop a love for the sport,” said the VC coach. “For those with some background, we want to increase their skill level and try to refine various parts of their game. For the newcomers, it’s all about introducing them to the soccer and getting them comfortable with it.”

When watching the camp’s goings-on from the nearby stands, one was struck by how well things were organized and the attention span of the campers. Even the youngest seemed engaged and focused on the task at hand.

For a majority of the time, the camp broke into three separate groups of around 20 participants. This is where the kids received the lion’s share of their individual instruction. The drills and the gameswithin the game were many and varied. It seemed as if no stone was left unturned and that any soccer skill, be it a primary one or not, was addressed.

There is not enough space here to adequately detail the checklist of all the drills that were undertaken. But suffice to say, it seemed as if all facets of the game were covered such as footwork and lateral agility, shooting and passing, dribbling and ball control, defending and the art of the tackle and just about anything else that could conceivably come into play.

And let’s not forget about the goalies, who were schooled in everything from taking proper angles and stopping shots, to kicking for distance and using the proper technique for overhead passes.

This writer found particular interest in drills that involved dribbling while being harassed by a defender, maneuvering the ball through a series of cones, games of close quarter passing, playing the ball off one’s chest before shooting or just shooting in general, be it from close range or after accepting a pass.

One thing that clearly stood out about the JSC was the upbeat nature that it engendered. The enthusiasm level was high, with the campers routinely 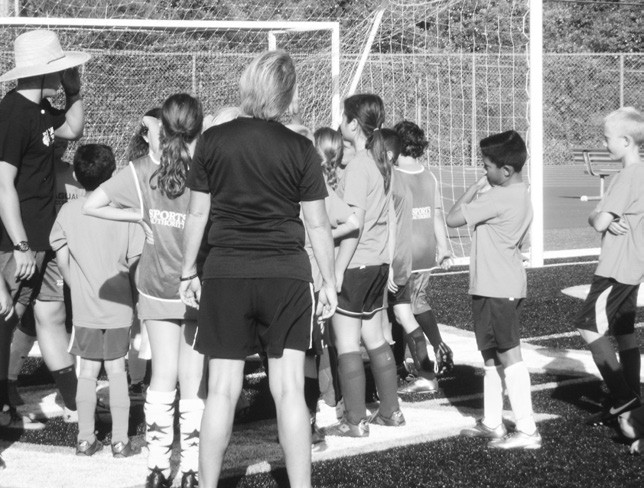 Campers gather round as coaches provide some up-close instruction.

clapping and cheering for one another when team competitions were involved. A kinship existed that was quite apparent. “The kids that I was working with were just so happy to be out there,” noted Coach Vexler. “They were laughing and having so much fun.”

And then there were the coaches. As a group, they were nothing short of stellar. Their interaction with the campers couldn’t have been more positive. Not only were they effective with their instruction, imparting their knowledge on both major and more subtle points of the game, but it was done in a most uplifting manner. Always encouraging, forever supportive, the coaches gave the campers a sense of worth, belonging and empowerment.

When canvassing some youngsters about their feelings of the camp, not a discouraging word could be found. Joey Quintana, age 10, mentioned how he was taught to do the scissors (step over) and dribble around the cones. “And the coaches know how to play the game and are really good teachers,” he added.

The Kopp brothers, David and Joseph, seconded the notion that the coaches were special. “And if you struggle, they will help you,” said David. Meanwhile, Joseph was quick to share that he had “learned some cool tricks.”

Jonathan Woodie, age 7, commented on how his shooting had improved. Nineyear old Natalie Allen told of how she was tutored to “kick with the laces.” And 14-year-old Katelyn Keene explained how the camp provided her with great preparation. “I’m very passionate about soccer and I wanted to get ready for my upcoming rec season,” she said. “The camp is perfect for helping me to do that.”

The feedback Coach Blasius has received concerning the JSC has been extremely favorable. He’s heard from parents who have raved about its impact and from others who have vowed to keep bringing their children coming back and back. Blasius’s goal of growing the JSC and establishing it within the fabric of the community seems quite realistic. With the word spreading, he expects the JSC to continue to take root and expand accordingly. He advises all those that might be interested to look for information about the 2016 JSC sometime next May.

In the meantime, Blasius, his fellow coaches, the volunteers and all the recent campers can reflect back on a memorable experience that will continue to pay dividends for all those that participated.

The JSC showed how it should be done. Start with great instruction, mix in a heaping helping of encouragement and positive reinforcement and finish things off with a let’s-have-fun mindset. Now that’s how to run a camp. The JSC got it just right!