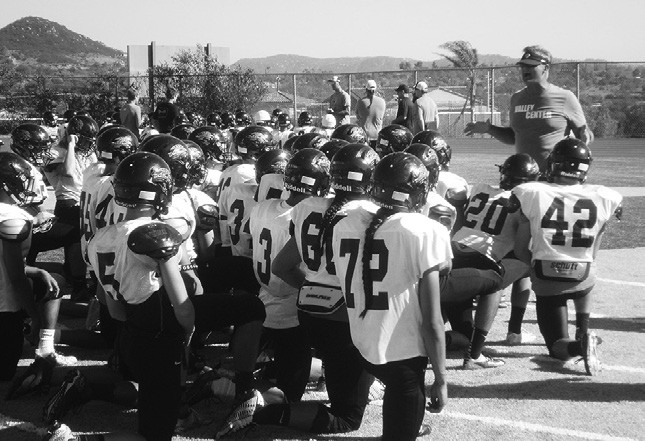 Coach Rob Gilster gives his team final instructions prior to the Jags’ road trip to Brawley.

The Valley Center High football team was hardly in a panic. With 13 returning starters and armed with more than an ample amount of confidence, the Jaguars figured they’d do plenty of winning in 2015.

But the fact remained that the Jags must have felt a bit of a sense of urgency heading into Friday night’s road game versus Brawley. The previous week, in their season opener against Mater Dei Catholic, VC had suffered a frustrating 29-23 setback when a costly fourth quarter fumble helped undermine them.

And though it wasn’t being mentioned, there still might have been some residual fallout from the Jags’ devastating playoff loss to Scripps Ranch, which had ended their 2014 season in heartbreaking fashion. The last two times VC had taken the field, the vanquished Jags had walked away knowing they’d let winnable games slip through their fingers. That kind of disappointment can work on the psyche. VC needed to change the dynamic and get things headed in a more positive direction.

The 111 mile trip to Brawley proved to be the just the balm the Jags were seeking. On a hot, late summer night, VC got their winning mojo back with a 21-14 conquest of the Wildcats. And though VC’s performance wasn’t without a few glitches, it was nonetheless an assertive one. VC clearly carried the play—and truth be told—the score was much closer than it should have been. Had the Jags eliminated some correctable mistakes, this contest would have been more breeze than challenge.

The Jag victory was built on solid defense and an offense that was productive when needed. Running back Andrew Navarro, who has been in total beast mode thus far this season, tallied on 3 and 9-yard bursts. The hardnosed senior also made good on a two-point conversion run. Not to be outdone, quarterback Rhett Reilly proved the passing game was in working order when he made it a family affair by hooking up with his twin brother Trent on a 7-yard scoring pitch.

“It’s always good to win,” said Rob Gilster, VC’s longtime coach. “It was nice to get this one. This should really help us moving forward.”

Though he isn’t ready to get too amped up at this stage, Gilster isn’t shy about stating that he feels VC is a good team at present, with plenty of upside and the potential to make some noise. If it all comes together, the Jags should be prime candidates to win the Valley (League) for the first time since 2012. And a deep playoff run could definitely be in the cards.

The fact that the Jags have a nice proportional mix of veterans and upand coming talent, bodes well for the team’s immediate prospects. There’s good balance on both sides of the ball and there are plenty of gifted players who could be classified as mainstays.

Let’s break down the roster and take a look at some high-profile athletes who figure to make the Jags a handful for anybody.

On offense, the Jags feature a runfirst, pro style scheme with heavy emphasis on zone blocking. And where else to start but at quarterback? With his blond hair and good looks, Rhett Reilly would be an ideal cast for a sequel to Friday Night Lights. After taking over as a starter midway through last season, Reilly brings with him the requisite experience factor. Calm under pressure and very coachable, the 6’3” senior runs well and can make every throw required of him. He’s a quiet leader who has the respect of 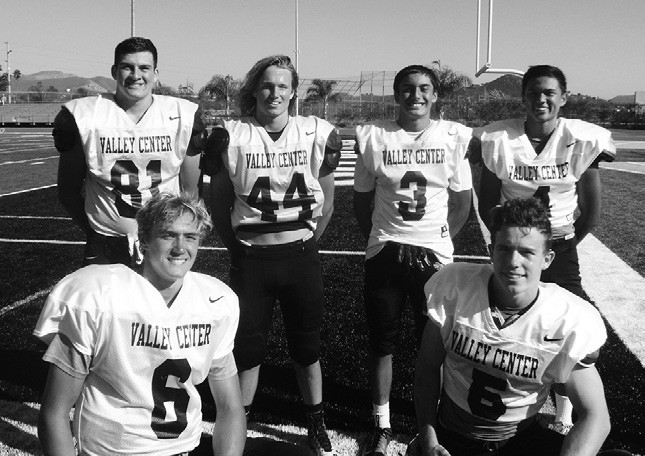 Jag standouts are upbeat about the new season. They are, from top left, Steven Much, Christian Patstone, Neiko Hernandez and John Cabvera. Kneeling are Rhett Reilly (left) and Jake Newman.

Reilly is blessed with the luxury of handing the ball off to some gifted runners. For the moment, foremost among them has been Navarro. In back-toback performances that have been off the charts, Navarro has shown himself to be a revelation. In the opener against Mater Dei, this workhorse toted the rock an astounding 41 times and totaled 176 yards. His follow-up versus Brawley was even more noteworthy as the 5’8”, 170-pounder translated a massive 44 carries into a significant amount of real estate (180 yards).

It will be interesting to see if Navarro can maintain anywhere near this level going forward. Last year’s leader rusher Jake Newman, who racked up a hefty 838 yards, is poised to soon return to the lineup after missing the early going while a broken foot mended. Newman is a smart and versatile athlete. Coach Gilster plans to use him in a variety of ways, including as an H-back and wide receiver. But look for both Navarro and Newman to get plenty of opportunities to strut their stuff with the ball in their hands.

The receiving corps is a deep one that Gilster plans to rotate with regularity. The most dynamic of the wideouts looks to be the fluid Neiko Hernandez, who has already hauled in 12 receptions. John Cabrera is another skilled and dependable target. Out of the slot, Brock Moffitt and John Contreras loom as legitimate threats. And in addition to being a bang-up blocker, tight end Steven Much is considered to be the team’s best pass catcher.

Anchoring a highly regarded offensive line is center Ricky Mendoza, a quick and heady lineman whom Gilster lavishes with praise.

The defense, whose strength resides in the down lineman and in the secondary, operates out of a 4-4 deployment.

It’s the guys up front who set the tone for the Jag “D.” Micah Wierenga uses his 6’5” height to great effect and is coming off an impressive sophomore campaign. Elijah McClure is very solid and stout inside. Tackle Christian Patstone is a bona fide leader, equipped with a great motor. Patstone’s knack for keeping a low pad level makes him a real pain to deal with.

The linebacking crew has thus far been paced by the active Moffitt, who has clearly been a standout through the season’s first two tilts. Trent Reilly is another backer worth keeping an eye on.

And on the back end, the Jags are loaded. VC is well seasoned in the secondary, returning all four starters. The ringleaders of the last line of defense are Hernandez and Cabrera, two-way performers who can cover and close on the run. Mikey Ibarra and Navarro round out what must be regarded as a top-flight aggregation.

The placekicking and punting chores appear to be in good hands, err feet, with Alexander Hakes providing reliable results.

Also look for the VC kickoff and punt coverage teams to play a huge role in winning the field position battle. Because these are the special teams most controllable, Gilster makes them a major point of emphasis. He promises that the fastest and most accomplished tacklers on the team will man these indispensible units.

Having taken care of Brawley and looking to hone things even more, the Jags will next take on Ramona at home this coming Friday night. With that welcome win under its belt, Gilster senses a possible breakout for his team, a building momentum lurking just around the corner. VC seems ready to roll. Given the talent that litters the lineup, there’s no reason why it shouldn’t!