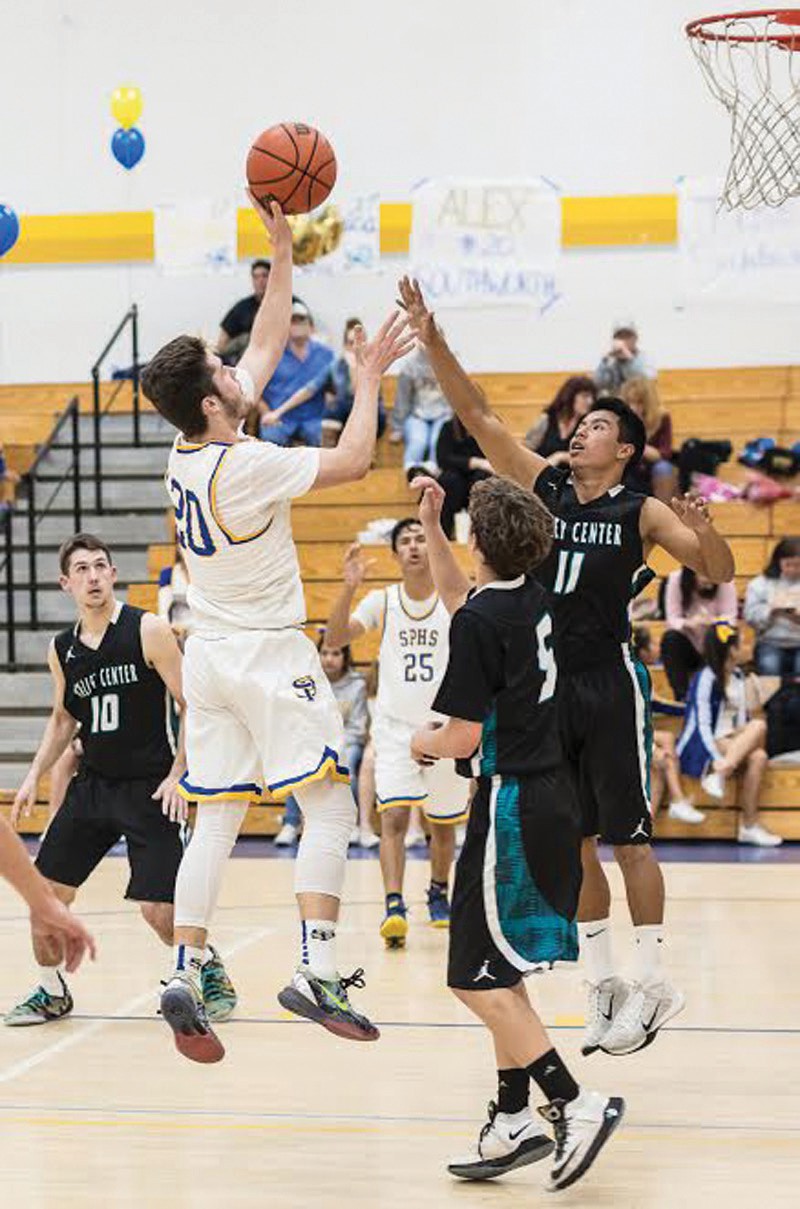 Entering Friday night’s hoop contest between Valley Center High and host San Pasqual, the goals and ambitions of the respective teams were quite divergent.

For the Jaguars, the major intent was to extend their winning streak to five and by doing so, continue to be a factor in the Valley League race and keep their postseason hopes alive.

Meanwhile, the Golden Eagles faced an entirely different challenge. Could they muster up the grit and resolve to keep competing hard in the face of a difficult, trying and winless season?

In the aftermath of the Jags’ hard-fought 61-53 victory, both teams proved their worth and each in its own way walked away a winner.

Paced by four players who scored in double figures, the Jags repulsed a spirited SP comeback from 14 points down in the final period to emerge with a win that upped their overall record to 11-12 and moved them into a second place tie in the VL with Escondido at 4-2.

As for San Pasqual, their earnest and determined effort was more than admirable but the ultimate result was the same as it had been on 25 prior occasions, an L in the won-lost column.

Not taking anything for granted, Jag coach Jon Jones explained to this reporter that he fully expected the G. Eagles to come out highly motivated and to play with passion and commitment and that’s exactly what happened. Utilizing an aggressive defense, SP at one time held a seven-point lead during a first period that eventually ended with a 16-12 margin for the hosts.

Lanky senior Skyler Wells was the igniter of SP’s positive start with a nice follow shot and four free throws. And the G. Eagle lead would have been much more substantial if not for the lights-out downtown shooting of VC point guard Kamin Davis. The baby-faced bomber nailed three treys, two from the right forecourt and another from dead straight away that enabled his squad to blunt some of SP’s momentum and stay within contact.

But the Jags, a team that will keep after it no matter what the circumstances, began finding their stride in the second quarter. Bolstered by a 15-3 run, VC seized its first lead since the game’s opening possession and then continued to build on it. There were a host of contributors during this defining stretch – three free throws from Kobe Dominguez, two close in hoops by Noah Tortes, a sweet pull-up jumper and two charity tosses courtesy of Josh Kirby, a bucket by Elliot Cumming and then Keith Vasquez provided the icing with he dropped in a pair of points from the line. Thanks to this lopsided run, the Jags went into intermission with a 30- 21 advantage and appeared 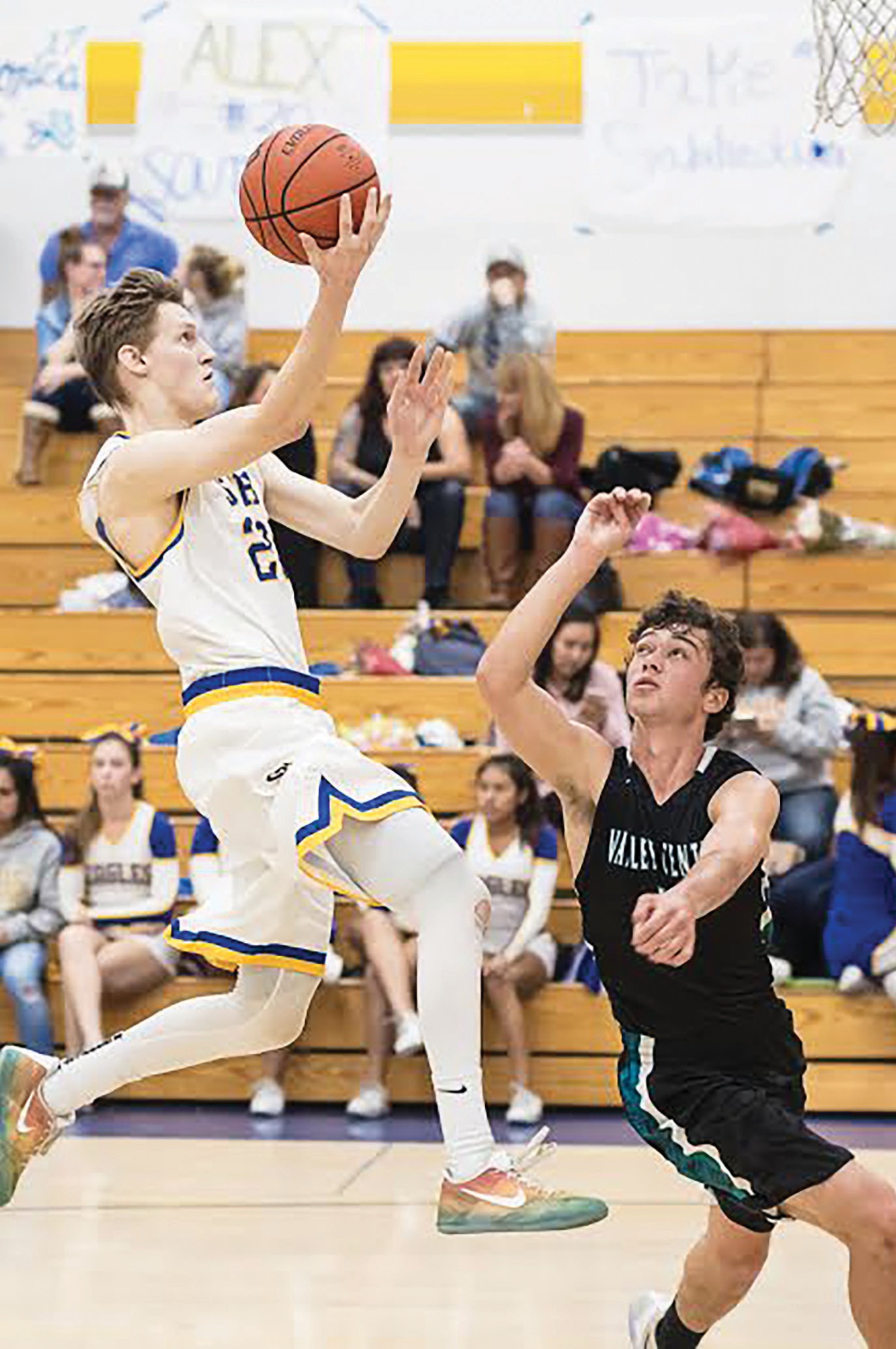 Golden Eagle Skyler Wells is focused on the basket as he rises over Jag defender Joe Stehly. Photos by Lenny Kerbs

positioned to perhaps run away and hide.

However, SP refused to buckle and due in great part to senior Alex Southworth’s six points — which included a deft flip shot and an off-hand floater — the G. Eagles crept at bit closer at 40-33 entering the final eight minutes of play.

From here, there were to be a couple of dramatic swings of fortune. First it was to be the Jags who caught fire and went on a 10-3 binge, highlighted by a pure Cumming’s trey that staked VC to a commanding 50-36 lead.

Given all the frustrations and disappointments that SP has had to endure this season, it would have been easy for the home team to have wilted at this stage. A lesser squad would have packed it in right then and there. Instead, the resilient G. Eagles found a way to rise from the ashes and mount a remarkable comeback that saw them tally 11 unanswered points.

Elijah Jackson kicked things off when he delayed his release and scored a nifty deuce. Then it was the forward Southworth who maintained his smooth stroking from the outside by burying a 3-pointer. Next it was the physical Jake Salahedinne getting open for an in-bounds layup. The SP scoring wave continued unabated when Wells came up with a steal and rode it all the way to the hoop. And when Southworth calmly netted two foul shots, the differential had stunningly closed to 50-47.

With home crowd reveling in this gutsy rally, SP was seriously knocking on the door of its first win. And had the G. Eagles be able to deliver another critical stop at this key moment, who knows what might have happened? But alas, that wasn’t in the cards.

With the game having reached critical mass and when his team needed him the most, VC wingman Kirby looked as confident as could be as he rose up for a mid-range jumper and knocked down the biggest shot of the game. Kirby’s basket had the effect of a dagger to the heart and took a lot of oxygen out of what had been an energized SP gym.

Though the G. Eagles had gallantly busted hump to get back in the hunt and make it a potentially winnable game, after Kirby’s heroics they would get no nearer than five points. Converting on nine of 10 free throws down the stretch, the Jags were able to salt this baby away. 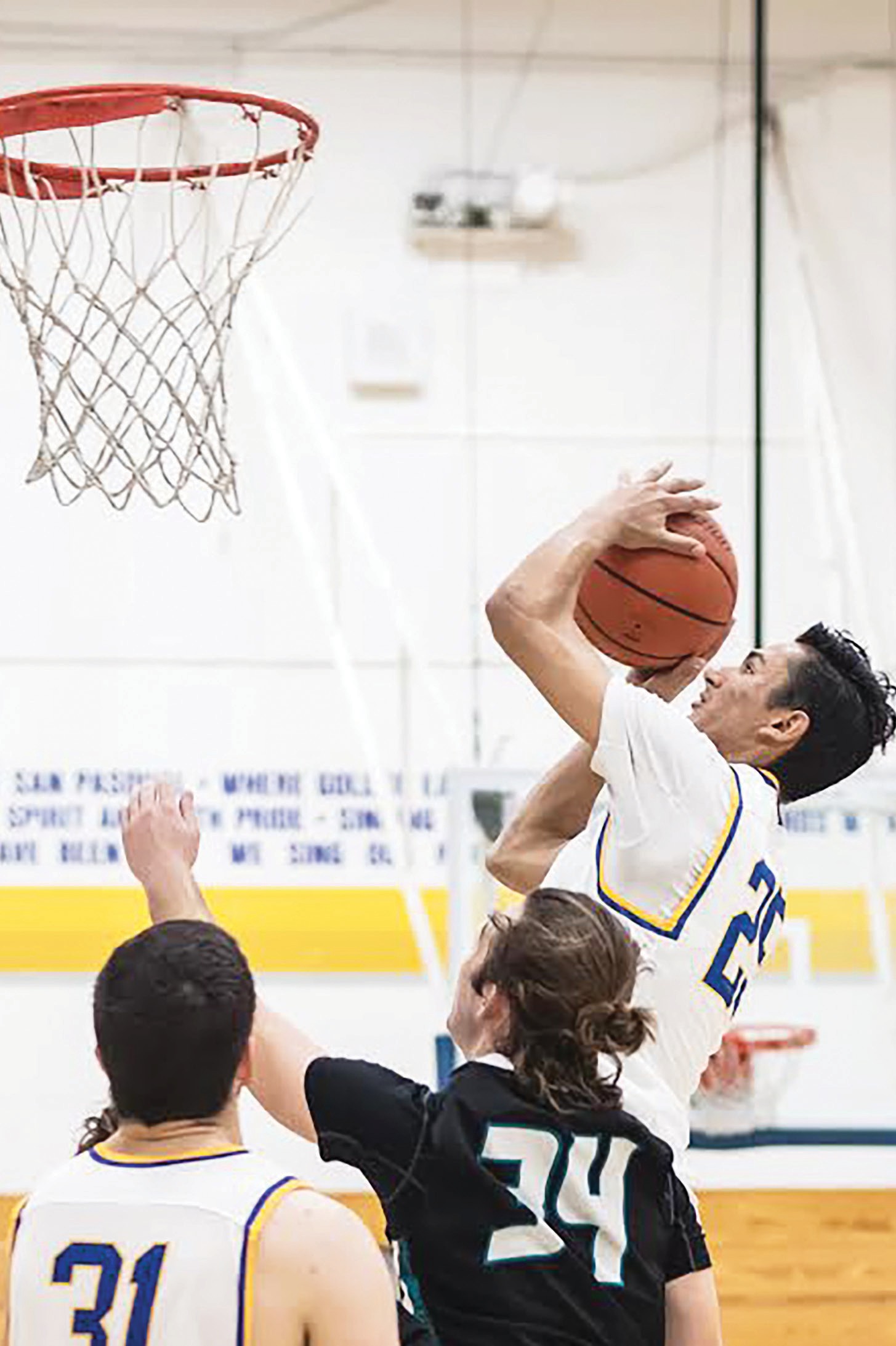 For the vanquished G. Eagles, they were spearheaded by a pair of seniors who left it all out on the court in what was the final home game of their prep careers.

Southworth was adept whether getting off shots either in deep or from the outside and finished with a game-high 17 points. Meanwhile, his teammate Wells proved to be a willing battler who earned every one of his 14 points.

And now these respective teams will move on towards different realities. For the Jags, must-win road games this week against VL foes Escondido and Ramona will tell the story as to whether they can somehow grab a share of the league title and remain in pursuit of a postseason berth. But should they fall in either of the aforementioned venues, their courageous late-season push will have come up a bit short and left them with no further options.

As for San Pasqual, a candid appraisal must concede that with testing away contests versus Fallbrook and Escondido to wrap things up, a winless campaign looms with a high degree of certitude. The odds do not favor the G. Eagles to get off the snide. But if they refuse to become discouraged and bring the same type of intensity that they exhibited against VC, that elusive first victory still might somehow be found.

As it demonstrated on Friday night, SP hasn’t lost its heart or soul. This is a team that has the wherewithal to soldier on and doesn’t seem inclined to simply go through the motions. The desire to compete is still there. If nothing else and in the face of the adversity they’ve been forced to confront, the G. Eagles have hung in there, kept at it and shown that sometimes winning isn’t necessarily reflected in a won-loss record. Rather, it’s all about staying in the arena and persevering. No one can argue that SP hasn’t done exactly that!

Writer’s Note – All photos contained in this article in addition to other game shots and pictures of the SP girls’ team, the Golden Eagle cheerleading squad and the crowd can be found at www.kerbscustom.com