Jags grind one out over gritty Escondido 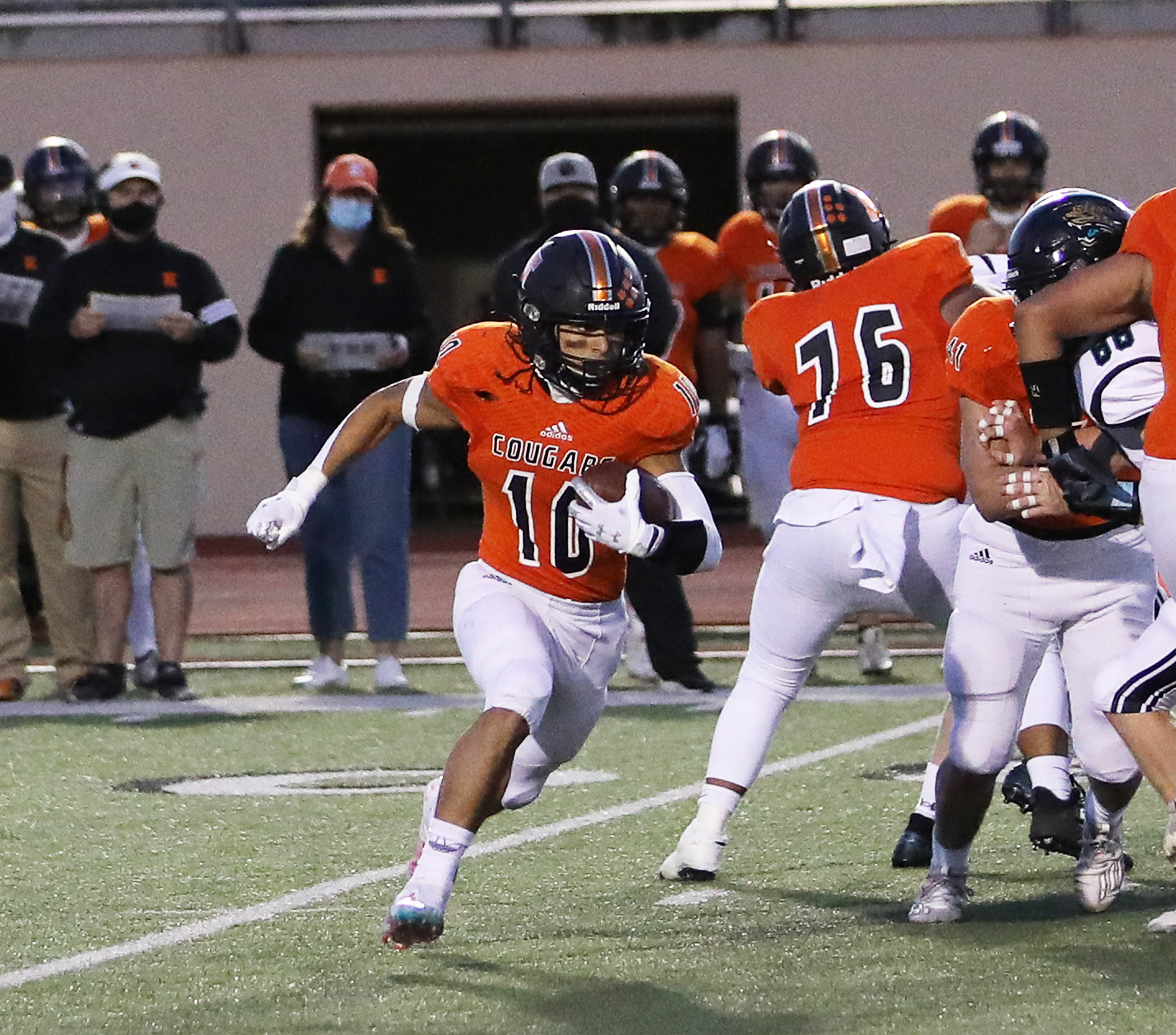 With the help of solid blocking upfront, Cougar running back Abraham Perez finds plenty of running room around the right side. Photos by Lenny Kerbs

Going into last Friday night’s Valley League contest against host Escondido High, Valley Center’s head coach Rob Gilster figured his team was going to be in for a scuffle. His gut instinct told him the matchup between the two nearby rivals might go down to the wire and that the outcome could hinge on timely execution late in the fourth quarter.

Well, it turns out that the venerable ball coach was spot on about what he expected to transpire at Wilson Stadium. In a tussle that indeed proved suspenseful almost until the final whistle, the Jaguars came through in the clutch and managed to stave off the gutsy Cougars by a final count of 17-14.

With the win, the Jags upped their record to 2-0 in this abbreviated and unprecedented prep football season while the Cougars suffered their first defeat and dropped to 1-1 overall.

The culminating moment that decided matters took place in the last minute of action. Faced with a fourth-and-3 situation in order to maintain possession and deny Esco a final offensive opportunity, VC quarterback Ethan Villalobos initiated a bootleg before hitting tight end Raymond Stehly on a 35-yard hookup that moved the chains and ended all doubt about the final result.

The winning margin was provided by kicker Jeremiah Sinohui with just 3:15 left when he booted home a 25-yard field goal that ultimately spelled the difference. “From inside the 40,” said Gilster, “Jeremy is money.”

In addition to his timely pitch to Stehly, Villalobos (133 passing yards) made his presence felt with a 14-yard touchdown strike to promising sophomore receiver Jake Dunckel as well as a 5-yard paydirt run in the third quarter that staked the Jags to a 14-0 lead.

But the Cougars used a pair of second-half scoring tosses by signal caller Robbie Ramos to stay close and remain in the hunt. The first of these payoff throws went for 15 yards to versatile running back/slot man Brody Mossbarger. The second was an electrifying 78-yard connection with playmaking wideout Tajae Brooks that featured a rapid scamper down the sideline.

“They made it hard on us,” said Gilster in the game’s aftermath. “We had to grind this one out because we weren’t getting any big chunk plays. They stacked the box and did a good job of playing defense.”

Because the Esco “D” was playing at such a high level, what Jaguar standout running back Colton Crossley was able to achieve was all the more impressive. Despite the fact that the Cougars had made stopping or slowing him down their top priority, the senior ballcarrier nonetheless managed to gain 136 yards on the ground. But he was forced to earn everyone of them as he put his quick feet and penchant for picking up hard yardage to much-needed effect.

And while his offense did just enough to help secure the win, it was the Jag defenders that once again caught Gilster’s eye after having produced a shutout the week before against Fallbrook. “The defense played great,” praised Gilster. “We did a good job of containing Ramos in the pocket and then rallying to him whenever he tried to run.”

Leading VC’s defense charge was safety Dylan Ewing-Villalobos who had a monster night with 8 tackles, a pair of sacks and a key interception.

The aforementioned Stehly, a two-way performer whose pivotal grab had salted things away, was also a force on the defensive side as he registered 6 tackles, racked up 2 TFL and generated plenty of pressure from his end position.

Two other Jag defenders that loomed large were linemen Jake Turner and Dakota Toler who did a masterful job of setting the edge and protecting the perimeter so that Ramos wasn’t able to get outside where he can wreak havoc with his legs.

For his part, Esco coach Jud Bordman felt the score reflected the similarity in caliber of the respective squads. “These were two evenly matched teams and it was a good, close battle.” said Bordman, “But give them credit, they deserved to win. They did a good job of controlling the clock and they never let us get into a rhythm—which was key because when we get into an offensive rhythm, we can be really explosive.”

Bordman saluted the Jags for the manner in which they forced the dual-threat Ramos towards their containment and also for rolling and mixing their coverage to make things more problematic for the fleet-footed Brooks.

Like his counterpart Gilster, Bordman was more than pleased with his team’s defensive effort and he was quick to point out a number of standouts. Nose tackle Dominic Minniefield was stellar while eating up blocks and making his share of stops. From the end position, Ben Massie did a splendid job of bringing some heat while also getting in on plenty of tackles. Third-year starting linebacker Jesus Fraga was his usual dependable self; who once again exerted his influence. And then there was Nick Womack, Luke Hilton and senior Chris Nava, three down linemen who were both active and disruptive.

In a confrontation—in which the differential was ever so slight, serendipity wasn’t on the side of the Cougars. Running backs Mossbarger and Abraham Perez both suffered knee injuries which limited their availability and when relegated to the sideline, their talents and speed were sorely missed. Moreover, Esco couldn’t convert some tipped balls or a couple of potential fumble recoveries into what might have been game-changing turnovers. The bounces just didn’t go the Cougars’ way.

However, this was a well-earned VC victory that was primarily predicated on making life uncomfortable for Ramos and Brooks, two terrific athletes who weren’t at their best because the Jags often had the answers on how to keep them in check.

Friday’s triumph marked the ninth straight time that the Jags have gotten the best of their neighbors to the south. Though Gilster revealed that he gets no special satisfaction in beating his alma mater, he does admit to being reflective whenever he steps onto the Cougar campus. “I have a lot of great memories here, especially about playing for Coach (Chick) Embrey and Coach (Dennis) Snyder,” said Gilster. He then shared that it was the influence of those accomplished men that engendered in him a desire to become a teacher/coach so that he could impact the lives of young people just as they had done with him.

Moving forward, the Jags will be home this Friday to the San Pasqual Golden Eagles, always a challenging opponent. “To be honest with you, I’m worried about them,” said Gilster. “Because we’ve played them so much, we know each other very well. And our defense will have the difficult responsibility of trying to hold them down because their offense can make things happen.”

Meanwhile, despite the setback, Bordman knows he is directing a program on the ascent and one that figures to have many bright days ahead. “I think we’ve started to establish and build a culture,” he said, “and it’s getting to the point where no one is going to walk over us.”

On that point, he certainly won’t get an argument from Gilster. Not after the Cougs pushed the Jags to the limit and forced the visitors into grinding out a real nail-biter. 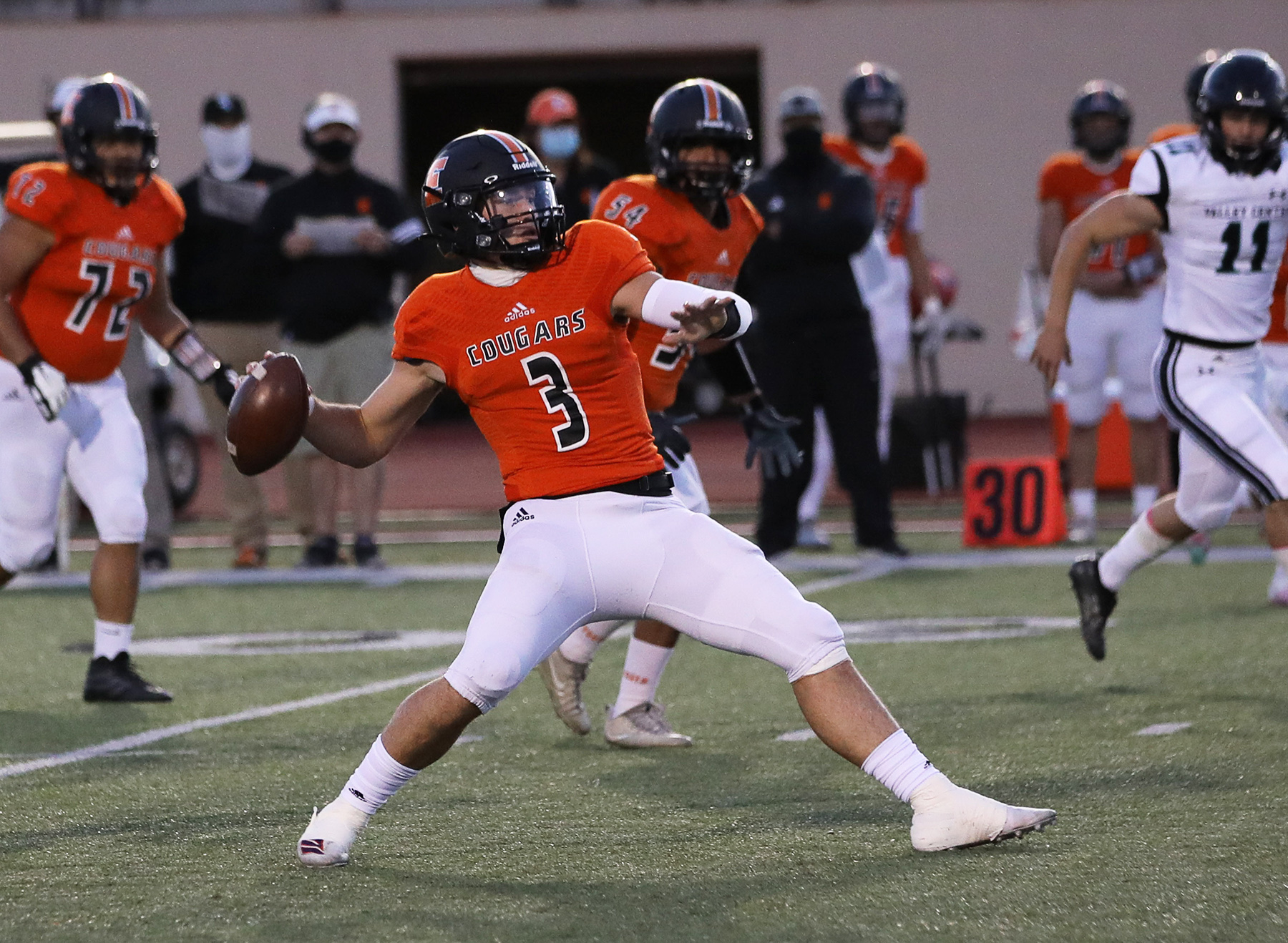 With the help of solid blocking upfront, Cougar running back Abraham Perez finds plenty of running room around the right side. Photos by Lenny Kerbs