Jags continue to roll while youthful Cougars look to the future 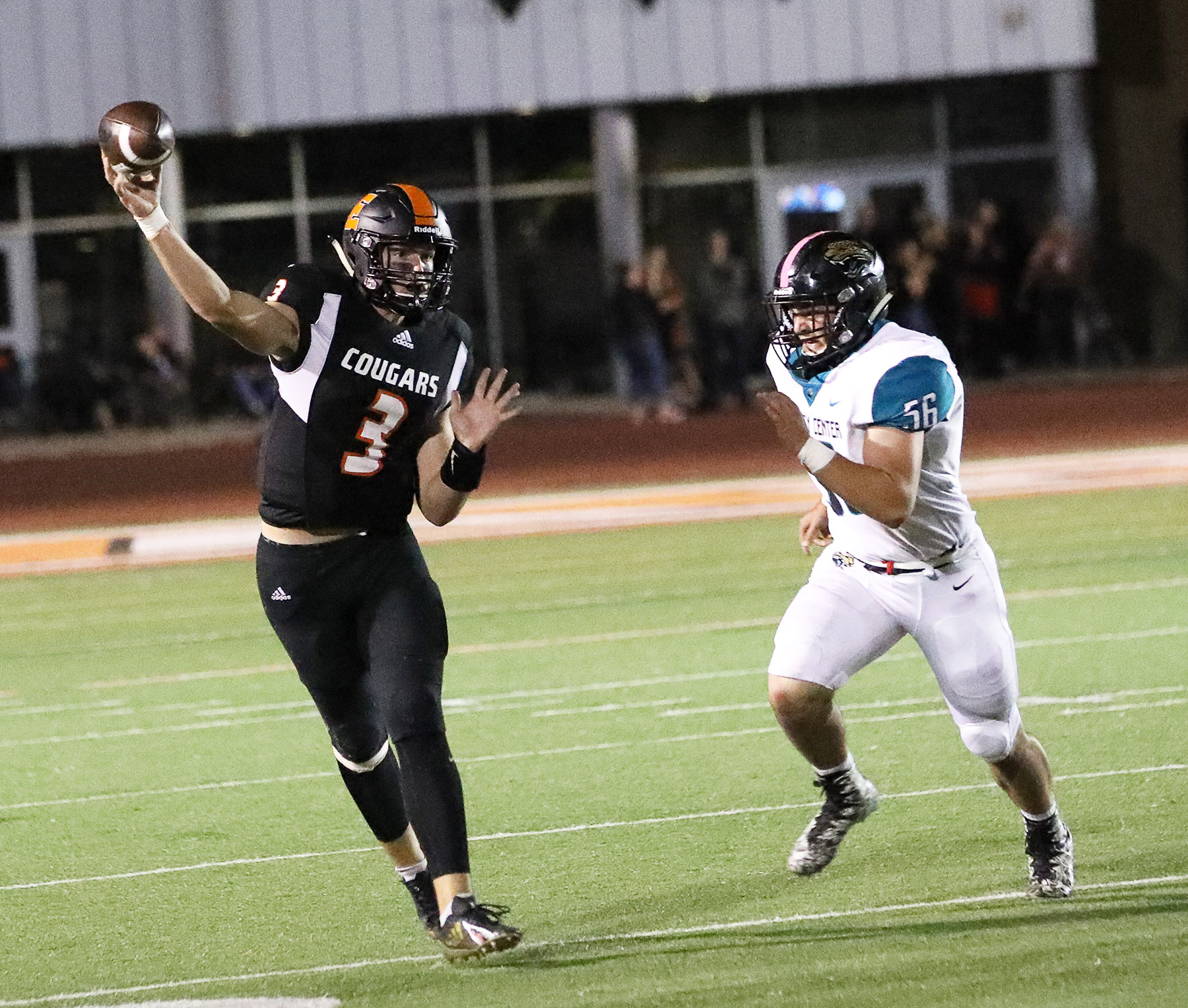 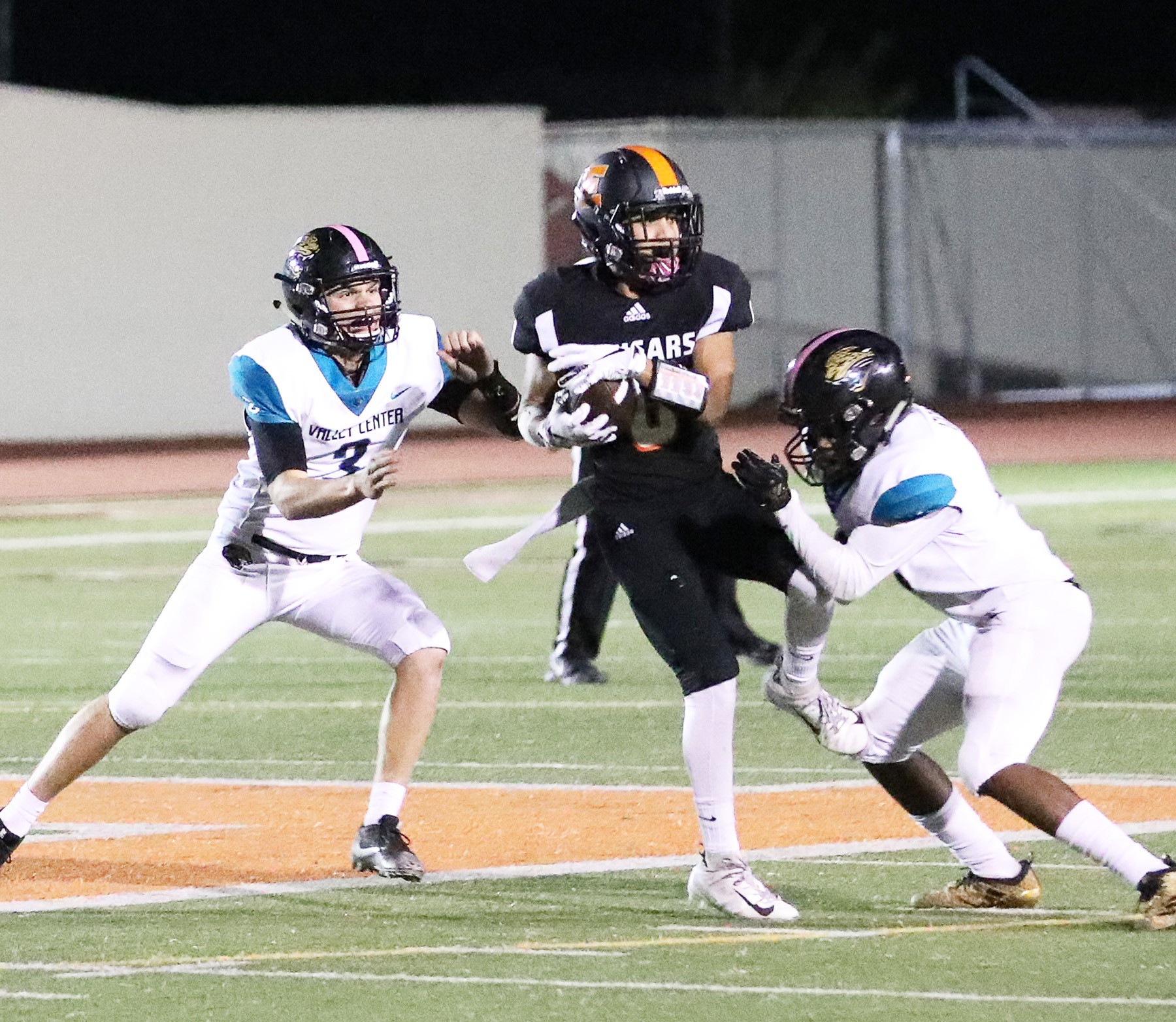 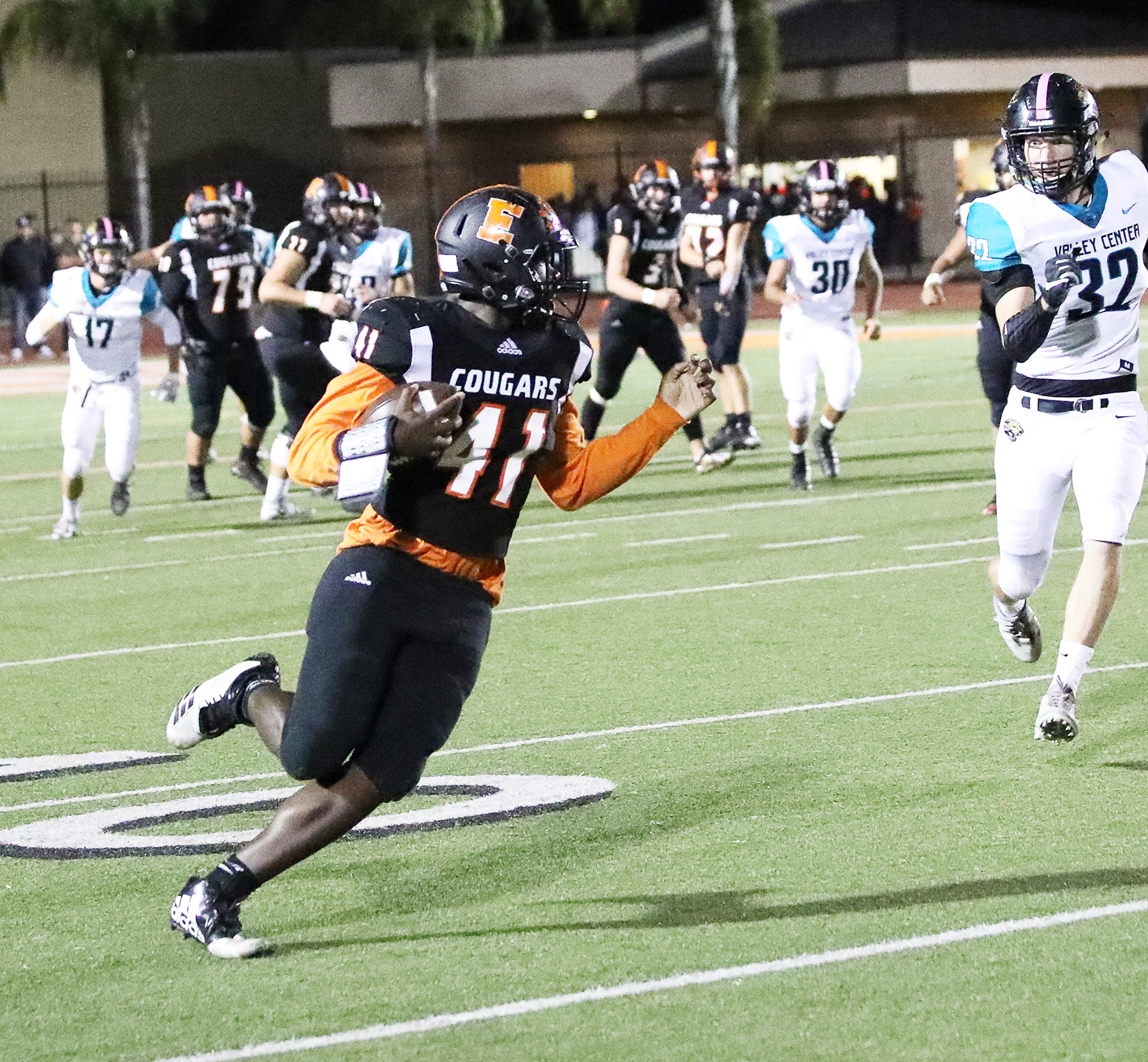 Know this about the Valley Center High football Jaguars. If they get on a roll, better look out because they can be harder to stop than a runaway locomotive.

Just ask Mt. Carmel, who they torched 57-3. Or inquire of Imperial, a team that fell 40-14 to the prolific Jags. Rancho Buena Vista will certainly testify to VC’s potency having been on the wrong end of a 31-0 score. And Fallbrook might be the Jags’ biggest booster of all after having been dealt a decisive 70-7 defeat.

What’s more, just last Friday night VC once again demonstrated its ability to go large, lighting up the scoreboard to the tune of a 42-0 conquest over local foe Escondido. It now appears that whenever the Jags get things going their way, they become tantamount to a force of nature.

“I think we have a talented team and we’re definitely starting to find our groove,” said head coach Rob Gilster in the immediate aftermath of VC’s latest victory. “We still missed some plays tonight but if our attitude stays right, I think we could reach our goal of playing our best football going into the playoffs.”

Not surprisingly, Escondido’s coach Jud Bordman wasn’t the least bit hesitant to sing the praises of what he saw from the visiting Jags. “They’re an outstanding team with great veteran leadership,” shared Bordman. “Rob (Gilster) does a super job of getting them to believe that they’re going to win whenever they take the field.  I definitely think they’re capable of winning a CIF championship. Right now, they’re the kind of team we aspire to be in the next couple of years.”

By virtue of getting the better of Esco, Gilster’s crew ran its overall record to 6-3 while staying unbeaten at 4-0 in the Valley League. Meanwhile, the youthful Cougars saw their ledger drop to 3-6 for the season and 1-3 in the VL standings.

VC’s triumph over the Cougs was all-encompassing, one that featured an efficient offense as well as a smothering defense that was keyed by the spectacular play of senior cornerback Chrishawn Gordon who picked off a brace of passes in addition to some other notable derring-do.

The dynamic Mateo Sinohui, who is making a concerted push for All-CIF honors, was another standout for the Jags as he parlayed his 117 yards on the ground into three touchdown runs. Now with a total of 23 rushing TDs on the year, Sinohui remains the San Diego Section leader in that meaningful and impactful statistic.

Knowing that they were going to have to pull out all the stops in order to spring the upset, the Cougars gambled right from the start with on onside kick attempt. But when the alert Jags recovered, it seemed to set the tone for the rest of the contest. And thanks to some productive toting by Sinohui and a pivotal 26-yard connection from quarterback Rikki Mazzetti to tight end Loren Diloreto, VC was eventually positioned at the 1-yard line from where Mateo crashed off the right side for the first tally of the night.

Less than five minutes later, the Jags had expanded their margin to 14-0 albeit with a huge helping hand from the Cougs. When active down lineman Lance DeSorbo dropped Mazzetti on a coverage sack, it appeared as if the hosts had forced a turnover on downs. But alas, a critical holding penalty wiped out the play and enabled the Jags to continue on with their march. If a turning point to the game could be pinpointed, this was assuredly it.

Faced with another telling fourth-down situation shortly thereafter, Mazzetti drilled the versatile Gordon right on the numbers for a clutch 13-yard gain. Three plays later, it was wideout Tuupash Turner’s chance to play the hero and he was more than up to the task. Deftly getting behind the Cougar secondary in the left-corner of the end zone, Turner embraced another spot-on toss from the poised Mazzetti for a 17-yard TD hook-up. At this stage, one could sense that the Jags had grabbed a hold of the momentum and weren’t about to allow it to reside anywhere but on their sideline.

It didn’t seem all that long before the Jags had tacked on an additional pair of scores in the second quarter. The first came as the result of another short plunge by Sinohui that was preceded by an artful Mazzetti to Turner aerial collaboration of 29 yards.

The second was truly a thing of beauty that was orchestrated by the talented Gordon. Adroitly reading Esco’s young quarterback Robbie Ramos, Gordon neatly sat down in coverage and picked off a Ramos heave. From there he absolutely put on a show, weaving in and out of traffic, accelerating when needed and exhibiting some sweet moves on his way to an eye-popping 59-yard interception return for a score.

But the Jags still had some time left before intermission and they were determined to make the most of it.  Taking over on a short field, Mazzetti gunned a 23-yard strike to the ubiquitous Gordon before doing the TD honors himself with a decisive keeper in which he smelled the goal line from 12 yards out. Always a confident gunslinger, Mazzetti’s ability to move, avoid pressure and scramble has been one of the most dramatic improvements he’s exhibited in his evolution as an all-around signal-caller.

With a running clock initiated in the second half, the Jags added a score midway through the third quarter when Sinohui waltzed untouched into the end zone from two yards out, making the final count 42-0.

Though VC’s offense was impressive, the defense’s performance really stood out. Nine Jag defenders registered at least two tackles while five others chipped in with one.

As mentioned above, it was a magical night for Gordon. Aside from his picks, the athletic senior broke up two passes, produced a touchdown-saving tackle and was credited with five hustle plays.

Sacks were also in abundance for VC as stout defensive linemen Xavier Jones and Dominic Stevens as well as active linebacker Eddie Imgrund wreaked their share of havoc with two apiece. Dominic Stevens was also a big contributor in the trenches with a pair of tackles for loss while linebacker Sid Weddington continued to make plays with four tackles credited to his account.

This was the second shutout of the year pitched by the VC defense and marked the fifth time this year that the Jags had held an opponent to seven points or under. Accomplished defensive coordinator Randy Cowell clearly has his ever-ascending unit playing at a very high level right now and with playmakers to be found at all three levels, the Jags figure to be a bear to score on from here on out.

As for the Cougars, they showed more than a few flashes of potential that suggest this is a team that could make some significant inroads in the immediate future. It must remembered that the Cougs are exceedingly young, starting a total of eight sophomores so gaining experience and getting to believe they can consistently win is all part of the process.

Bordman has done a praiseworthy job of changing the culture in a most positive sense in addition to making sure that his roster is populated by committed players who are motivated to put Escondido football back on the map. To a certain extent, they are currently paying their dues and learning the ropes but Bordman is convinced that soon the Cougs can become a real force.

In the sophomore Ramos, Esco has a bona fide talent, a strong armed QB who can really wing it as well as run with both power and elusiveness. Junior wide receiver Victor Seneres is a fluid athlete blessed with good hands, a knack for getting open and clearly capable of breaking the big play. Tight end Ben Massie offers Ramos a big target and has the look of someone who can come up with those vital chain-moving catches. And then there’s the intriguing running back Brody Mossbarger, a hustling sort who can read his blocks and accelerate through holes.

There are also some genuine up-and-comers on the defensive side, including soph linebacker Jesus Fraga and down lineman Jose Morales, both of whom got in on a number of tackles against the Jags.

And though they won’t be around after this season, seniors such as the engaged DeSorbo and the hardnosed Mason Malone made real contributions with not only their notable play but their willingness to set an example as to how to go about doing your business.

Moving forward, the Jags will welcome Ramona (6-2, 3-0) to “The Hill” this coming Friday night in what figures to be a riveting battle that will decide who will capture the VL crown. “It’ll be for all the marbles,” said a fired-up Gilster. “It’s fantastic that it has come down to this. Two teams from a couple of small towns ready to fight it out.”

Meanwhile, the Cougs will wrap up their regular season with a challenging contest against inter-city rival San Pasqual.

Indeed, as they once again showed versus Esco, when the Jags get on a roll, it’s darn near impossible to contain them. Someday soon, the Cougars are hoping they can be a similar juggernaut.